Honorable Mention: This is What a Lutheran Bishop Looks Like 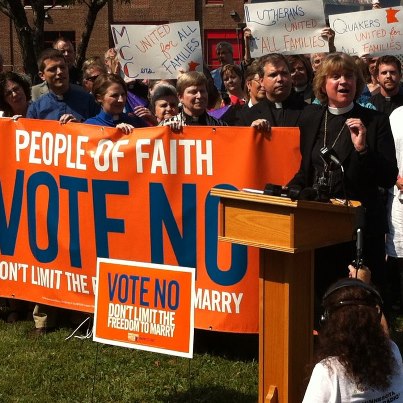 This picture is of Rev. Ann Svennungsen, Bishop of the Minneapolis Area Synod of the Evangelical Lutheran Church in America, speaking at a rally at the Minnesota State Fair this summer.  I use it courtesy of Javen Swanson, Faith Organizer at OutFront Minnesota, a cofounder of the Minnesotans United for All Families coalition.

Minnesota Public Radio reported on the event as the state’s 2012 political season ramps up:

Opponents of a constitutional amendment that would define marriage as only between a man and a woman staged their first event Thursday just outside the fair.

With the iconic gates to the fairgrounds in the background and amendment supporters singing the gospel song “This Little Light of Mine,” more than 100 clergy leaders gathered to show their opposition to an amendment.

“I’m a rabbi of a conservative synagogue in suburban Minnetonka,” Kravitz said. “Our congregation has been grappling with this issue respectfully and thoughtfully for at least 30 years. Many of us have come to believe it’s time to expand the canopy of marriage to same-gendered couples who want to make that significant commitment.”

Kravitz and the other religious leaders at the event are part of Minnesotans United for All Families, the coalition opposing the amendment.

A conservative rabbi, a Lutheran bishop, Quakers, MCC members and so many other people of faith working to support all families in their state.

This is what twenty-first century faith leadership looks like. 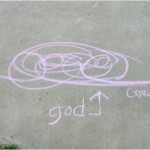 August 28, 2012 Back to School Book List
Recent Comments
0 | Leave a Comment
"You guys aren’t even close to Christians. You believe you’re better than Christ and can ..."
Kyle Racism, Sexism, & The Holiday Classics
"Even as a reverent agnostic, yet assuming a genuine divine revelation, I wonder how that ..."
John Gills How Gender Studies Transforms Religions
"Too bad all churches are shrinking faster than the polar ice caps."
Ivan T. Errible On Feminist Pioneers & White People ..."
"Isn't the Lutheran denomination, in all its manifestations, shrinking?You used to be nearly 5.5 million; ..."
Ivan T. Errible “Where God Is” :: Writing and ..."
Browse Our Archives
Follow Us!