This week, I’m heading to Washington D.C. for the second convening of the Faith and Reproductive Justice Leadership Institute at The Center for American Progress. 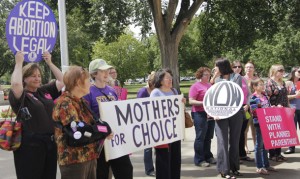 Sally Steenland, Director of the Faith and Progressive Policy Initiative, described the need for the project this way:

Religion and reproductive rights are usually pitted against each other in public debates and the media. But in real life they are not on opposite sides. According to the Guttmacher Institute, nearly 8 in 10 women who have abortions are religious, as are many of the doctors and nurses who provide abortion care. The late Dr. George Tiller, for instance, was a well-known abortion provider and regular churchgoer who was murdered inside his Lutheran church in Wichita, Kansas, three years ago.

Despite this reality, the notion that a person of faith can support reproductive rights seems contradictory to many Americans. And the notion that a person’s faith is a major reason why he or she supports reproductive rights seems stranger still. One reason for such a gap between perception and reality is that antichoice advocates have been successful in claiming religious truth exclusively for themselves.

A call for applications was issued in November, and I was thrilled to be one of twenty participants selected for the project, funded by the Ford Foundation. 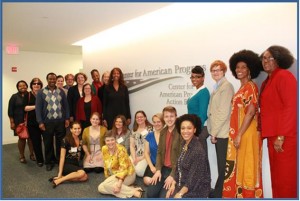 Leaders include clergy, sexuality educators, advocates, staff from mainline Protestant denominations, scholars, and writers. Throughout the year the institute will provide these 20 leaders with resources and training to strengthen their work and increase their visibility on issues of faith and reproductive justice.

And so it has.  Beginning with the first convening in March, which included conversation with Dr. Willie Parker, media training with Auburn Media, group discussion about the work that we are all doing, and time spent on learning and strategizing, the year has focused my work and equipped me to write and speak (hopefully) more thoughfully and more effectively.  In part, it’s how I ended up at Patheos writing about Todd Akin, Mitt Romney, Affordable Care for Women, on being pro-faith and pro-choice, and many other things.

In the intervening months, we have gathered electronically with webinars on defining reproductive justice, talking about religious freedom, and using social media among other things.  We have worked digitally to craft a communal statement about faith and reproductive justice.  And as we reconvene in Washington this week, I trust that there will be continued laughter, connection, and productive encounters to carry us forward through the election and beyond.

Because there is still work to be done.

September 18, 2012 People of Faith Understand ...
Recent Comments
0 | Leave a Comment
"They were all too aware of human perversions then and in the age before. Genesis ..."
Bob Shiloh How Gender Studies Transforms Religions
"I have Eve Wood-Langford's book in my personal library. I bought it because I was ..."
Walter Mattfeld The Most Interesting Chapter in the ..."
"You guys aren’t even close to Christians. You believe you’re better than Christ and can ..."
Kyle Racism, Sexism, & The Holiday Classics
"Even as a reverent agnostic, yet assuming a genuine divine revelation, I wonder how that ..."
John Gills How Gender Studies Transforms Religions
Browse Our Archives
get the latest from
Progressive Christian
Sign up for our newsletter
POPULAR AT PATHEOS Progressive Christian
1