Getting Theological: Jesus as Christ

In a comment responding to my first post in this series, Getting Theological, someone gently chastised me for not talking enough about Jesus or the bible.  I’m sure that what I have to say about Jesus (and the bible) won’t satisfy some people either.

I’ll write more about my view and use of the bible in a later post, though surely what I’ve already said and am about to say (and haven’t said or won’t say) provides insight into what I do and don’t think about it.  This post is focused on getting theological about Jesus as the Christ. 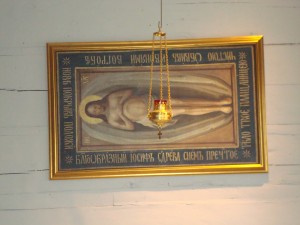 I use that last phrase intentionally.  In fact, when I’m teaching my introductory course, I give students a little shorthand way to think about the meaning of the terms Jesus and Christ as vocabulary words, deliberately separating them.

Jesus is a person’s name.  A historical figure who lived in first century Palestine.  A Jewish guy who did some stuff, inspired some people, sparked a movement, renovated a religion.

Christ is his job title.  Not his last name, I tell my students, which it sounds like it is if you use his full name accidentally:  “Jesus H. Christ!”  I talk about the greek work christos, the Hebrew word moshiach, the concept of a messiah that emerges out of Judaism.  The belief that God promises to send someone to deliver human beings from the bondage of sin and oppression on which Christianity zeroes in, centering its theological world.

While these are things that are part of what I believe to be true, I also am fairly assured that we have no idea what Jesus actually said and did.  The records that we have about his life and ministry come a generation or two later, written by followers who had particular beliefs themselves, along with political agendas and cultural constraints.  But … more on the bible later.

I’ve always been more interested  in talking about the life and ministry of Jesus, flawed as our record of what it is may be.  When it comes to his death and resurrection, and what they “accomplished,” I have always had more questions than answers.

That Jesus’ life itself begins with the bravery and courage of an unwed mother – a woman on the margins of society who wasn’t supposed to be the bearer of God – this I like.  It tells us something about God, for one thing, and it tells us something about who and what is valued.  Those values inform what the Christian tradition understands to be true about his life and work.  He criticizes the powerful, upends the moneychangers in the temple, refuses to judge the woman everyone else is quick to dismiss, and feeds the masses of hungry with both food and word.  This is what justice looks like.  He teaches those who will listen and he uses what he knows about his tradition to reinterpret it and revolutionize it.  The resulting conflict puts him in danger, and he makes the choice to continue anyway.  It’s risky.  Just like anything that’s worth doing.

And then what?  Execution.  Death.

Proclamations of a resurrection by his followers, by those women and men inspired by what he did and said.  The community that believed there was something in his life and work that lived on in them.  Church is born.

When the Christian theological tradition talks about these latter things, I sit with the questions.  Did God will the death of Jesus?  Is violence necessary for redemption?  Did a dead body really come back to life?

My answers are no … no … and … I can’t imagine it to be so.  {Kurt Willems deals with questions about a literal physical resurrection, over at The Pangea Blog.}

For me to say, to believe, or confess that Jesus is the Christ affirms life over death, love over hate, liberation over oppression, and deliverance over bondage.  It’s an affirmation that his life and death reveals those things about God’s vision for the world, and sparks my call to participate in making it reality.

The image above is of an icon in the Russian Bishop’s House in Sitka, Alaska, which I am standing in front of in the second picture. 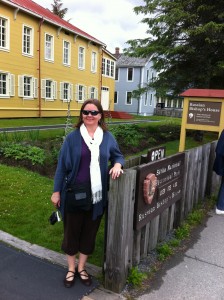 A friend and colleague told me about her memory of seeing this icon many years ago when she visited the site – a pregnant Christ image!  It inspired some of her own Christological reflections (in this book).  So it was a mission of sorts for me to find it when my husband and I were on an Alaskan cruise that came to port in Sitka last summer.  Look at it.  Despite the light hanging from the ceiling in front of it (I could only get so close since it hangs in consecrated space), the Christ’s swollen belly is evident.  As is the fact that it appears to be ensconced in a womb or egg-like shape.  It also seems to be a funeral pose.

Such a complex image of life, death, fertility, hope, boundary-transgression, male and female, human and divine.