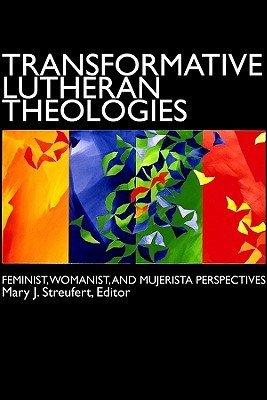 My friend and colleague Dr. Jacqueline Bussie tells the following story in her review of Transformative Lutheran Theologies: Feminist, Womanist, and Mujerista Perspectives, originally published in the Trinity Seminary Review, and excerpted in the current issue of the Journal of Lutheran Ethics:

All of the gift-wisdom of the theological essays in this book moves me to share a story. In the summer of 2010, the very same summer this book was published, I took part in a national conference research seminar of Lutheran scholars. At the end of our time together, every conference participant gave a presentation on their work-in-progress project and solicited constructive feedback from the other members. One of my male colleagues, whom I respect very much and who teaches at one of the ELCA liberal arts colleges, delivered a presentation in which, as a stepping stone for a broader argument, he used Luther’s theology of the cross to critique various elements of traditional theology. I was genuinely astonished that during his presentation he failed to mention any of the feminist, womanist, or mujerista voices within Lutheran theology who had already used the theology of the cross to make critiques in a similar vein. As soon as he was done speaking, I asked him if he was aware of texts such as [Deanna] Thompson’s Crossing the Divide: Luther, Feminism and the Cross (2004) and several others, texts which not only echoed his own argument but would make an invaluable contribution to his own broader project. He confessed that he was not aware of these texts and had not yet read them.

To my colleague’s credit, he did go on to read the texts I recommended. The article he had presented to our group in a preliminary way was eventually published in a very reputable journal. In his published article, he cited all of the important voices of Lutheran women that I had mentioned, and he even added a footnote thanking me for pointing him in the direction of these works. I am to this day grateful for my colleague’s willingness to learn and to expand his theological horizon. But a larger question still tugs at my ear: why had he never heard of these female theologians and their theologies in the first place?

I hope it is clear by now that, of course, this story is not really about my colleague, but instead is about the larger, more disturbing issue of this aporia in theological education. Such a cavernous gap in knowledge shocks the senses. For the problem, tragically, is by no means confined to my male colleagues. When not very long ago my institution was interviewing Lutheran women candidates for a university pastor position, the chair of my department posed to each finalist candidate the question, “Who is your favorite feminist or womanist theologian?“ All of us present were heartbroken when neither of the two finalists could even cite a single female theologian they had ever read. Both candidates were graduates of the very same Lutheran seminary, which I shall not name, and both had graduated from that same seminary in the last six years. I was ashamed, shocked, and horrified, as much as it is possible to feel all of these emotions in the exact same moment in time.  How, in the 21st century, can we be graduating Lutheran pastors from seminaries who cannot even name a single theologian who is not male?  How can we be graduating Ph.D.’s in theology and seminarians who have little or no working or appreciative knowledge of the contributions of half of the world’s population to that theological discourse?

Both of these anecdotal experiences indicate that it was kairos time for the publication of Streufert’s volume. The fact that the volume’s publication is overwhelmingly needed within our tradition appears incontestable.

You can read more of her discussion of the various essays in the book here.  It was an honor to be included in this collaborative volume, and I too commend it to you.