What Does The Color Red Mean or Symbolize in The Bible

Perhaps one of the most passionate, meaningful, and sometimes even deadly colors of all is the color red. For many, it is a passionate and fiery color—one that can stir up seduction, which is why a common phrase is “fiery passion.” Yet, the color takes on a much more powerful meaning in the context of the Holy Scriptures. It can be argued, with much support, that the most meaningful and symbolic color in the entirety of Scripture is none other than red. It goes by another name at times, though—scarlet. So, what does the color red mean or symbolize in the Bible? To find out, let’s examine some notable Bible passages.

Don’t be confused at the use of “red” and “scarlet” in this verse. This is a case of the Bible emphasizing something by repeating it in a different way. This passage is saying that God has the ability to take sins and purify them. Notice that the color red (or scarlet) is used to describe sin. This repeats a number of times throughout the Bible, pointing to the fact that “red” is often synonymous with sin—and it must be cleansed.

Joshua 2:18 “unless, when we come into the land, you bind this line of scarlet cord in the window through which you let us down, and unless you bring your father, your mother, your brothers, and all your father’s household to your own home.”

This story is a part of the narrative with Rahab the harlot. Because she helped the Israelite spies, they told her she and her family could be spared, so long as they put a scarlet cord out of the window to signify that they are not to be hurt. Oddly enough, even though the Bible can use scarlet, red, or crimson as colors that symbolize sin, it is often the symbol that saves.

Exodus 12:7 “And they shall take some of the blood and put it on the two doorposts and on the lintel of the houses where they eat.”

At the end of the plagues in the book of Exodus, the Israelites were told to kill an unblemished lamb and put the blood of it on their doorposts, so that the spirit of God would literally pass over (where they get Passover from) the houses and spare them from death. Once again, the color (blood is red…just a reminder!) has two meanings: death, because the lamb shed its blood, but also redemption because it spared those who had it on their doorposts. 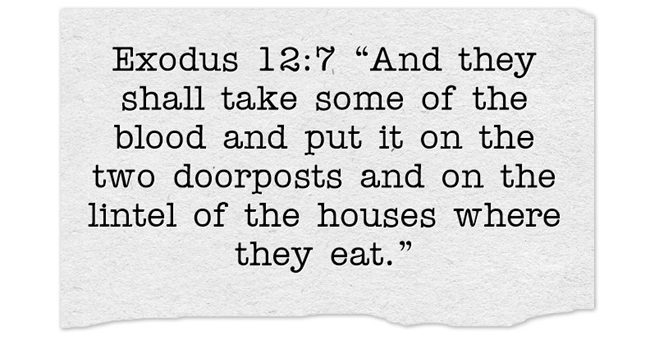 All of this culminates within the blood of Jesus. Passover, ultimately, was a foreshadow of a greater one to come. Instead of a lamb, Jesus shed His blood for the world. And, “whosever believes in Him should not perish but have everlasting life” (John 3:16). It is our sin that Jesus had to die for and He willingly paid the price so that all can have access to the Father through Him, so long as they accept it. Even Jesus, when talking to His disciples about communion, said “for this is My blood of the new covenant, which is shed for many for the remissions of sins” (Matthew 26:28). The price for sin can only be paid through the shedding of blood; the Old Testament made that very clear. Once again, as a foreshadowing of Jesus to come, the sacrificial system made the Israelites slaughter lambs in order to atone for their sins. Jesus is our sacrificial lamb, the one without blemish. Because He died, we can live.

Red is a very powerful color in the Bible. It speaks of the sin that all mankind holds, but also of the redemption that everyone has access to because of Jesus shedding His blood on the cross. Had it not been for His sacrifice, people would have no longstanding way of atoning for their sins. Although in the Old Testament people slaughtered goats and other animals to do so, it was a temporary fix. Jesus, however, through His blood made the final price once and for all. So, the color red in the Bible (also scarlet and crimson) can symbolize both sin and redemption, but either way they point to some type of blood sacrifice and needful redemption.

November 3, 2014
What Does The Color Gold Mean Or Symbolize In The Bible
Next Post