Parable of the Shrewd Manager: Summary, Meaning and Commentary

What does the Parable of the Shrewd Manager mean?  What lessons are there in this story for Christians today?

What He Shrewd or Dishonest?

Luke 16:1-2 “He also said to the disciples, “There was a rich man who had a manager, and charges were brought to him that this man was wasting his possessions.  And he called him and said to him, ‘What is this that I hear about you? Turn in the account of your management, for you can no longer be manager.”

This man must have been fired for a very good reason.  The charge was “brought to him that this man was wasting his possessions” but nothing was ever said that indicated that he was actually guilty of the charge but since the man didn’t argue for his case, we can assume that he was guilty as charged.

Luke 16:3-4 “And the manager said to himself, ‘What shall I do, since my master is taking the management away from me? I am not strong enough to dig, and I am ashamed to beg.  I have decided what to do, so that when I am removed from management, people may receive me into their houses.”

This man apparently had never worked at physical labor since he wasn’t strong enough to dig and his pride prevented him from begging so he thinks of a way to have people “receive [him] into their houses” meaning that he wouldn’t have to be homeless if his idea worked.

These measures are no small amount because one measure of oil is equal to 875 gallons and a hundred measures of wheat is between 1,000 and 1,200 bushels so this man is talking about a very large sum of money.  There may have been negligence on this manager’s part in collecting these bills for his master and may have been part of the reason that he was fired so he decides to cut the bills down which causes these who are debtors to the master to pay up.

Luke 16:8-9 “The master commended the dishonest manager for his shrewdness. For the sons of this world are more shrewd in dealing with their own generation than the sons of light.  And I tell you, make friends for yourselves by means of unrighteous wealth, so that when it fails they may receive you into the eternal dwellings.”

The master liked what he saw and so commended him for being so shrewd but there is nothing in these verses that indicate that, after he was fired, he was dishonest in his dealings with the master’s debtors.  In fact, he was able to get them to pay at least part or most of their bills as opposed to the master receiving no payment from them so that’s certainly better than nothing.  Then the master tells him to “make friends for yourselves by means of unrighteous wealth, so that when it fails they may receive you into the eternal dwellings.”  What does this mean?  There is nothing inherently righteous about money and in fact, money is amoral but Jesus may be telling us in the parable to use our money for the kingdom of God’s purpose while we still have money or while we are still alive on this earth.  That is, when we support ministries that preach the gospel and bring it into other parts of the word, we are essentially going to be receiving people into our eternal dwellings because we were part of the laboring in the Great Commission (Matt 28:18-20; Acts 1:8).  Can you imagine having people come up to you in the kingdom of heaven and say “You were part of the reason that I was saved since you supported those who shared the gospel with me…” while others will say that you directly told them about how they could be saved and that you’re the reason that there.  Either way, you will be “making friends for yourself” and receiving them “into the eternal dwellings” because you were obedient to the Lord’s command to “go into all the world and make disciples of all nation” (Matt 28:19).  The following verses are why I believe Jesus is telling us that we must use the money that God has blessed us with and entrusted us with to help others come to saving faith but also may be the principle of not cheating our own “masters” or employers out of what they deserve from us by what they pay us for our labor.

In these verses Jesus is talking about stewardship of our own resources because He says that if someone is faithful in a small amount, the Lord will entrust him or her with more and if we are dishonest in the small things then we’ll be untrustworthy and likely dishonest in the bigger things.  If we’re not “faithful in that which is another’s” which could mean if we aren’t giving our employer the labor that they deserve, then we are being dishonest in smaller things, therefore God is never going to trust us in the bigger things.  We cut ourselves off from greater blessings in the future if we are not faithful in the smaller things today.

Luke 16:13 “No servant can serve two masters, for either he will hate the one and love the other, or he will be devoted to the one and despise the other. You cannot serve God and money.”

Your heart or your loyalty cannot be divided in half.  God cannot work with a half-hearted believer.  He either has all of your heart or money has it and thus, it takes the place of God…as an idol.  There is no way to serve two masters at the same time…and sadly, even for some Christians, it is money that they serve and not God. 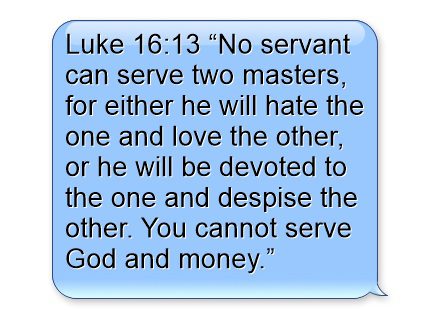 If you have never been saved then you are serving yourself and you are making yourself your own god.  If this is you and you would repent today, God will forgive your idolatrous heart and make you a child of God by sending you His Holy Spirit and then you can be born again and destined for the New Jerusalem (Rev 21, 22) or be shut out of the kingdom for all time in a place of utter despair and regret (Rev 20:11-15).