What Does The Parable Of The Weeds Mean?

What Does The Parable Of The Weeds Mean? January 16, 2019 Jack Wellman

God actually knew there would be tares or false converts within the church, but why?

In the Parable of the Weeds, Jesus said that “The kingdom of heaven may be compared to a man who sowed good seed in his field, but while his men were sleeping, his enemy came and sowed weeds among the wheat and went away” (Matt 13:24-25), and in time, “when the plants came up and bore grain, then the weeds appeared also” (Matt 13:26). Jesus said you will know them by their fruits, or in this case, what comes to seed shows where the root is. After the weeds sprang up, the servants of the Master asked Him, “do you want us to go and gather them?’ But he said, ‘No, lest in gathering the weeds you root up the wheat along with them. Let both grow together until the harvest, and at harvest time I will tell the reapers, “Gather the weeds first and bind them in bundles to be burned, but gather the wheat into my barn” (Matt 13:28-30).

If it were up to us, we might uproot the wheat in our congregations and mistake the weeds for what is actually the wheat. Only God knows the heart (1 Sam 16:7), however this parable is referring to the world and not the church. For example, there are many who live like the world who claim to believe in Christ. These are those out in the world who hear the Word of God (Matt 13:38), but they are also part of the world, so the majority of these tares or weeds are not members of any church. Jesus said, “The field is the world, and the good seed represents the sons of the kingdom. The weeds are the sons of the evil one” (Matt 13:38). This parable tells us that Jesus fully expects there to be tares or weeds on the earth, up until the day of His return. On the Day of Judgment, there will be many false converts who will be stunned to hear that Jesus doesn’t even know them (Matt 7:21-23)!

It is only as the plant mature and bears fruit (or seed) that we can know with some assurance where the root is, but even then, only God knows for certain. That’s because some bear fruit or seed at a slower pace than others, and people may not always see the good seed that a person produces as good works are not done to be seen by others. That being said, Jesus reminds us that a “healthy tree cannot bear bad fruit, nor can a diseased tree bear good fruit” (Matt 7:18). Again, we shouldn’t be surprised by the fact that there’ll be weeds mixed in with the wheat in the world, and in some cases, scattered within the churches, but we can get into trouble when we try to settle something with someone that they’ve already settled with God. We may not have all the facts, but is shouldn’t surprise us that some churches may be full of tares. Churches that neglect or have none of the sacraments like the Lord’s Supper and baptism, no church discipline, and don’t preach on sin, sanctification, holiness, repentance, evangelism, and other essentials, as even today, there “are false apostles, deceitful workmen, disguising themselves as apostles of Christ. And no wonder, for even Satan disguises himself as an angel of light” (1 Cor 11:13-14), and “So it is no surprise if his servants, also, disguise themselves as servants of righteousness. Their end will correspond to their deeds” (1 Cor 11:15). Jesus will send His angels “and they will gather out of his kingdom all causes of sin and all law-breakers, and throw them into the fiery furnace” (Matt 13:41-42a), but that will not be until harvest time is, and no one knows that day or hour, but at that time, “the righteous will shine like the sun in the kingdom of their Father. He who has ears, let him hear” (Matt 13:43). 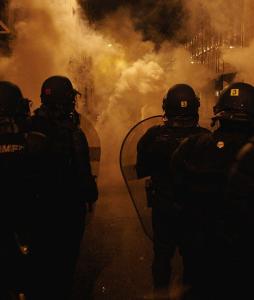 Why there are tares or weeds within the church is not precisely stated in Scripture. Jude actually wanted to write about their common salvation, but something more urgent came along, and it was the necessity to contend for the faith once delivered to the church (Jude 1:3). The reason was that “certain people have crept in unnoticed who long ago were designated for this condemnation, ungodly people, who pervert the grace of our God into sensuality and deny our only Master and Lord, Jesus Christ” (Jude 1:4). How those who pervert the gospel “were designated for this condemnation” is beyond my comprehension. All I know is that all things work together for the good for the children of God (Rom 8:28), but all things work out for the bad for those who oppose the gospel of Christ. This doesn’t mean they are helpless victims of prophecy or circumstance. We are all responsible for our own actions and will reap the consequences of those actions, both bad and good. It is the idea of human responsibility for the choices they make, but it’s much worse for the false convert. Why? If they’ve sat under good Bible preaching and teaching for some time, but have never been brought to repentance and faith in Christ, more will be required of them than those who haven’t really understood the gospel. Jesus said that “the one who did not know, and did what deserved a beating, will receive a light beating. Everyone to whom much was given, of him much will be required, and from him to whom they entrusted much, they will demand the more” (Luke 12:48). With knowledge comes responsibility; with much knowledge comes much more responsibility.

Where the Bible is silent, I believe I must be silent. Where the Bible is not specific about something, I can’t be specific about it either. Why God allows tares to grow alongside the wheat that’s scattered in the world is beyond me. I do know that it has been appointed as such and that it all glorifies Him. No matter what happens, His will is going to be done, and that always glorifies God. We too should seek to glorify God in our bodies, in our conversation, and in our thought life. Tough to do, but we can have the Spirit’s help and He will give us the right words to say to the weeds in the world that they might become the children of God. It is only by God’s grace that we are not still weeds. Even though we are not better than others…we are better off…but only because of Christ.

January 14, 2019
The Exclusivity Of Salvation Through Christ Alone
Next Post

January 18, 2019 The Living, Active, Word Of God
Recent Comments
38 Comments | Leave a Comment
Browse Our Archives
get the latest from
Evangelical
Sign up for our newsletter
POPULAR AT PATHEOS Evangelical
1