What Does Betrayal Mean? A Biblical Definition of Betrayal

What Does Betrayal Mean? A Biblical Definition of Betrayal May 21, 2015 Jack Wellman

Most of us have been betrayed before but what does it mean to be betrayed? What’s a biblical definition of betrayal?

A secular definition of betrayal is a violation or breaking of a trust, contract, or confidence between an individual, group or organization that someone or others place in a person, group or organization which is a total break from what was agreed upon earlier by both parties. It is like a husband or wife committing adultery or a nation that is aligned with another nation against a common foe who then turns against that one that they were aligned with and joining with the common enemy for which they had made a compact or agreement to fight against. It is the height of treachery against someone or a group that seems in direct conflict with what was first agreed upon. Benedict Arnold is a great example of someone who betrayed his country and who once was a general for the American Continental Army but defected to the British Army and became one of the greatest traitors in American history.

The greatest biblical example of all for betrayal was that of Judas Iscariot who betrayed Jesus for 30 pieces of silver, the typical price one paid for a slave in that day. We read of Judas’ plan to betray Jesus in Matthew 26:14-16 “Then one of the twelve, whose name was Judas Iscariot, went to the chief priests and said, “What will you give me if I deliver him over to you?” And they paid him thirty pieces of silver.  And from that moment he sought an opportunity to betray him.” This must have been extremely difficult for Jesus because He said “I say to you, one of you will betray me.” And they were very sorrowful and began to say to him one after another, “Is it I, Lord?” He answered, “He who has dipped his hand in the dish with me will betray me.  The Son of Man goes as it is written of him, but woe to that man by whom the Son of Man is betrayed! It would have been better for that man if he had not been born” (Matt 26:21-24).  The disciples were very worried that it might be them which is why they were “very sorrowful” and “began to say to him…‘Is it I, Lord?’” Judas knew that it was him for he asked “who would betray him [and Judas asked], “Is it I, Rabbi?” He said to him, “You have said so” (Matt 26:25). Jesus had earlier washed the feet of His betrayer and now, the man who had been with Jesus for over three years was going to betray Him for only 30 pieces of silver! 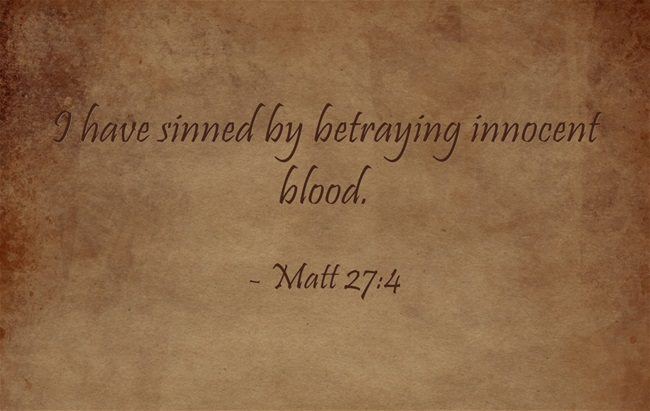 Jesus went to the Garden of Gethsemane knowing that He was about to be arrested and said “let us be going; see, my betrayer is at hand” (Matt 26:46) and “While he was still speaking, Judas came, one of the twelve, and with him a great crowd with swords and clubs, from the chief priests and the elders of the people.  Now the betrayer had given them a sign, saying, “The one I will kiss is the man; seize him.” And he came up to Jesus at once and said, “Greetings, Rabbi!” And he kissed him” (Matt 26:47-49) and “Jesus said to him, ‘Judas, would you betray the Son of Man with a kiss’” (Luke 22:48)? There seems to be some surprise by Judas. Perhaps he didn’t realize that they were going to crucify Jesus and so “when Judas, his betrayer, saw that Jesus was condemned, he changed his mind and brought back the thirty pieces of silver to the chief priests and the elders, saying, “I have sinned by betraying innocent blood.” They said, “What is that to us? See to it yourself.” And throwing down the pieces of silver into the temple, he departed, and he went and hanged himself” (Matt 27:3-5).

Judas’ example of betrayal is so vivid among believers today and even in Jesus’ day that no one dared take the name of Judas again because his name was associated with betrayal. Pilate knew that Jesus was innocent saying “to the chief priests and the crowds, “I find no guilt in this man” (Luke 23:4) saying “Why, what evil has he done? I have found in him no guilt deserving death. I will therefore punish and release him” (Luke 23:22). After Stephen was arrested for his faith in Christ he said to the council “Which of the prophets did your fathers not persecute? And they killed those who announced beforehand the coming of the Righteous One, whom you have now betrayed and murdered” (Acts 7:52). When Paul was giving instructions for the observance of the Passover he also said “I received from the Lord what I also delivered to you, that the Lord Jesus on the night when he was betrayed took bread” (1 Cor 11:23) giving further testimony to Jesus’ betrayal and the greatest biblical example of betrayal found in the Scriptures, both in the Old and the New Testament.

We can see that Jesus’ betrayal is perhaps the greatest occurrence of injustice in all of human history. The Bible records this fact of history but He was betrayed as part of the sovereign will and plan of God to be our Redeemer so that He could purchase a people for Himself by the precious blood of the Lamb of God Who died for those who have or will repent and trust in Him. We dare not take this blood for granted because someday all who refuse to bend the knee to Jesus today will face the wrath of God on the day of their death or at the appearance of Christ (Rev 20:12-15) and no one knows exactly when that will be, so today should be your day of salvation (2 Cor 6:2) for He could come at any moment.

May 21, 2015
What is the Biblical Definition of a Eunuch?
Next Post

May 21, 2015 What Is Apostasy? A Biblical Definition of Apostasy
Recent Comments
2 Comments | Leave a Comment
Browse Our Archives
get the latest from
Evangelical
Sign up for our newsletter
POPULAR AT PATHEOS Evangelical
1