What Is Apostasy? A Biblical Definition of Apostasy

What Is Apostasy? A Biblical Definition of Apostasy May 21, 2015 Jack Wellman

How does the Bible define apostasy? What is it exactly so we can know to identify it?

The word itself is from the Greek word “apostasia” and is very much like renouncing or disassociating oneself from a particular religion or certain religious beliefs. It is similar to a rejection of beliefs that were once held and accepting different beliefs and might even be a renunciation of the beliefs that were previously held. For example, is someone converts to another religion, they reject or turn away from their beliefs from something they once believed and turn to believing in another, much different religion or it might be a falling away from anything to do with religion. Apostasy can also be considered abandonment or defiance of what was previously held to be true and practiced and rebelling against those same beliefs and practices. Someone or some group who does this are considered an apostate.

Paul saw it happening in his day and in one of his last letters he said “the Spirit expressly says that in later times some will depart from the faith by devoting themselves to deceitful spirits and teachings of demons, through the insincerity of liars whose consciences are seared” (1 Tim 4:1-2) and certainly any teaching from demonic forces must be an apostasy from what the true faith is which Paul said would happen “in later times.” Some would teach a prohibition on marriage while others a prohibition on certain foods (1 Tim 4:3) both of which is contrary to the gospel of Jesus Christ, thus showing that these who teach such things are apostates. 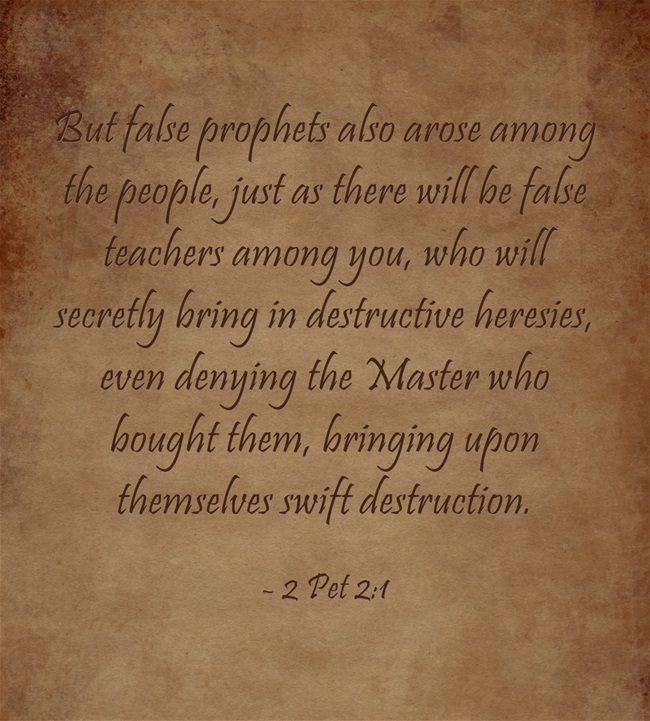 Peter saw a lot of apostasy that would be coming too writing that “just as there will be false teachers among you, who will secretly bring in destructive heresies, even denying the Master who bought them, bringing upon themselves swift destruction.  And many will follow their sensuality, and because of them the way of truth will be blasphemed.  And in their greed they will exploit you with false words. Their condemnation from long ago is not idle, and their destruction is not asleep” (1 Pet 2:1-3). So they exploit people with “false words” and blaspheme “the way of truth” but they will come to destruction and then condemnation.

The Apostasy of the Angels of Light

In the very last letter that Paul wrote he told Timothy that “the time is coming when people will not endure sound teaching, but having itching ears they will accumulate for themselves teachers to suit their own passions, and will turn away from listening to the truth and wander off into myths” (2 Tim 4:3-4). Anything that is taught as a “man-pleaser” or to tickle the ears, must be considered apostasy for anything taken away from or added to the gospel makes it another gospel entirely and one that is altogether different and isn’t really a gospel at all (Gal 1:7). There are certainly a lot of apostate teachers and preachers out there today. Paul would identify “such men [as] false apostles, deceitful workmen, disguising themselves as apostles of Christ. And no wonder, for even Satan disguises himself as an angel of light.  So it is no surprise if his servants, also, disguise themselves as servants of righteousness. Their end will correspond to their deeds” (2 Cor 11:13-15). An apostate teacher or preacher is disguised “as an angel of light” meaning they look like they’re teaching the gospel but they’re really apostates and what they teach is actually apostasy or the doctrine of demons.

One of the best ways to discern apostasy from the real gospel is to be consistently in the Word of God and why the author of Hebrews wrote that “for everyone who lives on milk is unskilled in the word of righteousness, since he is a child.  But solid food is for the mature, for those who have their powers of discernment trained by constant practice to distinguish good from evil” (Heb 5:13-14) so if someone is not growing in biblical knowledge (lives on milk) rather than knowing more biblical knowledge (on solid food) their powers of discernment are not trained by constant practice in the Word and thus, cannot “distinguish good from evil” teachings by apostates.

A lot of people profess to know and teach the truth but if it varies any at all from what the Bible teaches, then mark this; they are apostates. That is according to what the Bible teaches and not based upon my own opinion. Paul tells Titus to “rebuke them sharply, that they may be sound in the faith, not devoting themselves to Jewish myths and the commands of people who turn away from the truth” (Titus 1:13-14) because “They profess to know God, but they deny him by their works. They are detestable, disobedient, unfit for any good work” (Titus 1:16). Anyone can profess but not all possess true faith in Jesus Christ and certainly not all teach it.

The Bible warns us that “in the last days there will come times of difficulty” (2 Tim 3:1) and many will have “the appearance of godliness, but denying its power” (2 Tim 3:5). The best way to avoid apostasy and reject the teachings of apostates is to be reading the Word of God, study the Word of God, and listen to good expository biblical teachings in church, at Sunday school or in a local Bible study. The best way to identify the counterfeit is to know the genuine article.

May 21, 2015
What Does Betrayal Mean? A Biblical Definition of Betrayal
Next Post

May 21, 2015 What Is The Biblical Definition of Joy? How Does The Bible Define Joy?
Recent Comments
33 Comments | Leave a Comment
Browse Our Archives
get the latest from
Evangelical
Sign up for our newsletter
POPULAR AT PATHEOS Evangelical
1