What Is The Biblical Definition of Pride? How Is Pride Described In The Bible?

Why is pride a problem with humans? What is the biblical definition of pride and how is it described in the Bible?

A Secular Definition of Pride

Pride is not just a problem for me…it is a problem for humanity. Pride’s been defined as a feeling of deep pleasure or satisfaction in an achievement, an accomplishment, or in someone else or something else but it’s also been described as conceit, egotism, vanity, vainglory, all over one’s own appearance or status in life and not just something that’s been accomplished. It is an inwardly directed emotion that can easily offend others and carries with it a connotation that displays an inflated sense of one’s own worth or personal status and typically makes one feel a sense of superiority over others and can easily make someone look condescendingly at others. Pride in one’s nation or in one’s own children is somewhat different from that of having pride in themselves (Prov 17:6) but even that can self-attribute a sense of worth that is easily overvalued, overinflated, and be unrealistic.

The Root of All Sin

I believe, from what I’ve read in the Bible, that pride is at the root of all sin. God hates pride because we really have a misplaced sense of worth. God says that “In his pride the wicked man does not seek him; in all his thoughts there is no room for God” (Psalm 10:4) and that “I hate pride and arrogance, evil behavior and perverse speech” (Prov 8:13). Pride is the opposite of humility and this is what we read in Proverbs 11:2 “When pride comes, then comes disgrace, but with humility comes wisdom” which is why “patience is better than pride” (Eccl 7:8). God thunders out of heaven saying to all who are prideful “The eyes of the arrogant will be humbled and human pride brought low; the Lord alone will be exalted in that day” (Isaiah 2:11). We will either humble ourselves or God will do it for us and one is much more painful than the other which is why Isaiah writes “I will put an end to the arrogance of the haughty and will humble the pride of the ruthless” (13:11). Even nations that are overly prideful God says that “the most wicked of nations…I will put an end to the pride of the mighty, and their sanctuaries will be desecrated” (Ezk 7:24). 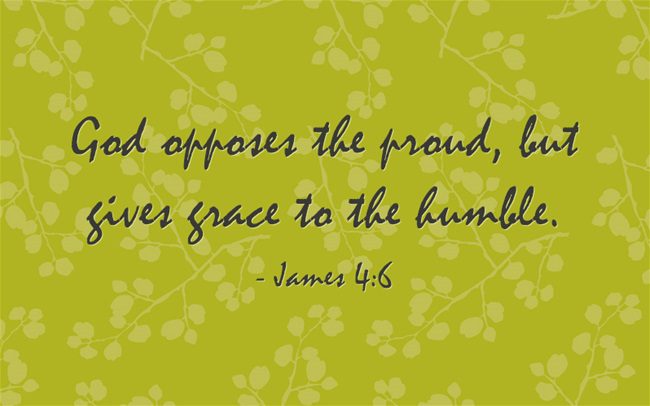 God is Opposed to the Proud

James writes that “God opposes the proud, but gives grace to the humble” (James 4:6). The Greek word James uses for “opposed” is “antitassō” and this means “to range in battle against” or to basically be at war with so God is at war and ranging in battle against all who are proud. Peter writes the exact same thing in 1st Peter 5:5 “God opposes the proud but gives grace to the humble” and the same Greek word is used for being at war so God resists the proud but He will only give grace to those who are humble. Pride was the cause of Satan’s fall from heaven as he said in his heart “I will ascend above the heights of the clouds; I will make myself like the Most High” (Isaiah 14:14). What he meant was that he wanted to take the place of God because Satan desires worship like God has and even tempted Jesus to worship him (Matt 4:9). Satan made Eve fall for the same trap in making her think, by deception, that if she took from the tree of the knowledge of good and evil “your eyes will be opened, and you will be like God, knowing good and evil” (Gen 3:5).

Solomon wrote that there are “six things the Lord hates, seven that are detestable to him” (Prov 6:16) and these include “haughty eyes, a lying tongue, hands that shed innocent blood, a heart that devises wicked schemes, feet that are quick to rush into evil, a false witness who pours out lies and a person who stirs up conflict in the community” (Prov 6:17-19). If you look at each one of these seven things that God detests you can see that pride is at the center of each one, particularly “haughty eyes” because the Hebrew word for haughty is “ruwm” and means “to rise, to be high, to be lofty,” and “to be exalted” so we can see that this is exactly what pride is. It is to be exalted above others and this makes them naturally look down, condescendingly, on others.   What causes a person to lie? Usually it is the fact that they are protecting themselves…pride is at the core. Someone who stirs up conflict is someone who wants to look better than others and being compared to them, they are deemed superior. Pride was the first sin…cosmic treason, against God and it is at the root of all sin.

The Ways of the World

The world operates from a sense of pride. This is what the Apostle John wrote in 1st John 2:16 “For everything in the world—the lust of the flesh, the lust of the eyes, and the pride of life—comes not from the Father but from the world” which is exactly what happened to Satan and caused the fall of Adam and Eve in the Garden. The way of Edom is the way that most of the world operates as Obadiah writes “The pride of your heart has deceived you, you who live in the clefts of the rocks and make your home on the heights, you who say to yourself, ‘Who can bring me down to the ground” (Obad 1:3) so pride can deceive us. The same thing happened to King Belshazzar “when his heart became arrogant and hardened with pride, he was deposed from his royal throne and stripped of his glory” (Dan 5:20).

Since we know that God resists the proud and the Bible describes pride as being at the root of all sin, we should humble ourselves or God will do it for us. Pride can cause us to fall flat on our face because “When pride comes, then comes disgrace” (Prov 11:2) so I would suggest that we humble ourselves or God will have do to it for us and as I wrote before, one is a lot more painful than the other, therefore “Humble yourselves, therefore, under the mighty hand of God so that at the proper time he may exalt you” (1 Pet 5:6) because as Jesus said “those who exalt themselves will be humbled, and those who humble themselves will be exalted” (Matt 23:12).

May 22, 2015 How Does The Bible Define Arrogance?
Recent Comments
14 Comments | Leave a Comment
Browse Our Archives
Follow Us!