Here are five of the top Bible verses about Michael the Archangel.

Daniel 12:1 “At that time shall arise Michael, the great prince who has charge of your people. And there shall be a time of trouble, such as never has been since there was a nation till that time. But at that time your people shall be delivered, everyone whose name shall be found written in the book.”

Daniel chapter ten is all about the end times and times so troubling that it had never been like this since there were any nations. Jesus seems to say the same thing when He spoke of the end of the age, saying “then there will be great tribulation, such as has not been from the beginning of the world until now, no, and never will be” (Matt 24:21) so Daniel 12:1 may be when Israel is surrounded by enemies and is close to annihilation. The reference to Michael may indicate that the demons and perhaps Satan himself will try to destroy Israel but Michael and the other angels rise up to defend her. Michael will do this again in the Book of Revelation, if this is not speaking about the same experience which is at least possible.

Jude 1:9 “But when the archangel Michael, contending with the devil, was disputing about the body of Moses, he did not presume to pronounce a blasphemous judgment, but said, “The Lord rebuke you.”

Apparently Jude must have heard from Jewish tradition that the Devil had a dispute about Moses dead body. God buried Moses and so no one knows where he was buried so how Jude mentions that Devil contending with Michael over Moses body indicates that there might have been spiritual warfare over the body of Moses. For what reason, I am not sure. Maybe Satan wanted to make it a shrine where people would begin to worship his tomb and then take their eyes off of God. 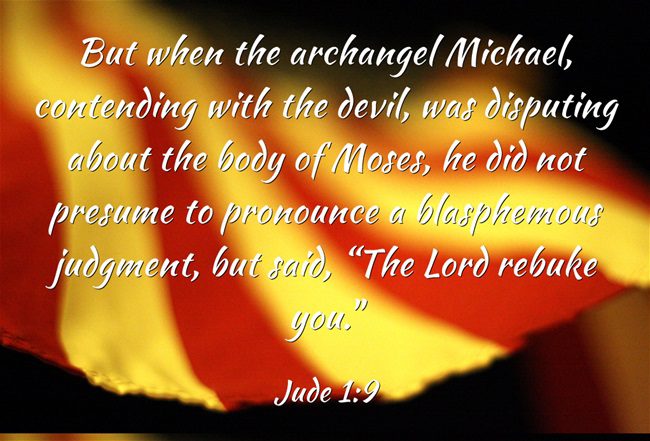 Daniel 10:13-15 “The prince of the kingdom of Persia withstood me twenty-one days, but Michael, one of the chief princes, came to help me, for I was left there with the kings of Persia, and came to make you understand what is to happen to your people in the latter days. For the vision is for days yet to come.”

Returning again to the Book of Daniel, here is where Daniel finally got his prayer answered even though “from the first day that you set your heart to understand and humbled yourself before your God, your words have been heard” (Dan 10:12). Apparently there was spiritual conflict in trying to bring the answered prayer to Daniel. The “prince of the kingdom of Persia” could have been Satan himself or one of Satan’s more powerful demons. That’s probably why it took three weeks to get to Daniel and only then it took one of the chief princes of angels, Michael, to finally help get the message through to Daniel.

The final war in heaven; the war that actually does end all wars will happen when Michael and his angels fight against Satan (the dragon) and his demons (fall angels) and of course, he was soundly defeated. After that, there was no place for him in heaven anymore and so he and his demons were cast down to the earth for the last time as it is written, “And the great dragon was thrown down, that ancient serpent, who is called the devil and Satan, the deceiver of the whole world—he was thrown down to the earth, and his angels were thrown down with him” (Rev 12:9). Game over Satan.

Daniel 10:21 “But I will tell you what is inscribed in the book of truth: there is none who contends by my side against these except Michael, your prince.”

The final Bible verse about Michael the archangel is where Daniel saw “one having the appearance of a man touched me and strengthened me” (Dan 10:18). Daniel was terrified and if not for the one touching him, Daniel would have likely fainted. Was this an angel or the Son of God in a pre-incarnation appearance? Either way “he said, “O man greatly loved, fear not, peace be with you; be strong and of good courage.” And as he spoke to me, I was strengthened and said, “Let my lord speak, for you have strengthened me.” Then he said, “Do you know why I have come to you? But now I will return to fight against the prince of Persia; and when I go out, behold, the prince of Greece will come” (Dan 10:19-20). So he came with a message from God and now had to return but would have to fight his way back appearance and after he’s gone, the “prince of Greece” will replace the ”prince of Persia” which may be another powerful demon or again, Satan himself.

We know that God is our ultimate protector and not angels because angels can do nothing except that which God commands them to do. They are at His disposal and live to do His bidding at all times and never act independent of the will of God. It is very possible we’ll see Michael the archangel someday. For those who have refused to humble themselves and instead, are God-haters, Christian-bashers, and sin-lovers, not even Michael the archangel can help you on judgment day (Rev 20:12-15) because you have refused to repent and trust in Christ which is the one and only way to be saved (Acts 4;12).

October 22, 2015
Top 7 Bible Verses About End Times Or The Last Days
Next Post

October 23, 2015 Top 6 Bible Verses About Positive Thinking
Recent Comments
0 | Leave a Comment
Browse Our Archives
get the latest from
Evangelical
Sign up for our newsletter
POPULAR AT PATHEOS Evangelical
1