Top 7 Bible Verses About End Times Or The Last Days

Here are my top seven Bible verses referring to the last day or the end times, sometimes called the end of the age.

Matthew 24:10-12 “And then many will fall away and betray one another and hate one another. And many false prophets will arise and lead many astray. And because lawlessness will be increased, the love of many will grow cold.”

During Jesus’ so-called Olivet Prophecy, He was telling the disciples that there would come a time where many false prophets or teachers will rise up and lead many, not a few, astray. The idea of lawbreakers increasing is easy to document around the world today with the rise of violent crime and so too has the love of many grown cold. A very important point is that many will fall away and many will arise to lead many astray. This isn’t a small problem but one where many (most?) will be deceived.

Second Timothy 3:1-5 “But understand this, that in the last days there will come times of difficulty. For people will be lovers of self, lovers of money, proud, arrogant, abusive, disobedient to their parents, ungrateful, unholy, heartless, unappeasable, slanderous, without self-control, brutal, not loving good, treacherous, reckless, swollen with conceit, lovers of pleasure rather than lovers of God, having the appearance of godliness, but denying its power. Avoid such people.”

If you call the study of God theology then you might call the study of man “meology” or “it’s all about me” and satisfying my needs. No wonder that in the last days difficult times will come and in fact, have already come. People love money, self, are proud and arrogant, and abusive, disobedient to parents, ungrateful, unholy, heartless, unappeasable (can’t be satisfied), slanderous, having no self-control, brutal and the list goes on. Just watch the news and you’ll see that these last day are plenty full of difficulty. We used love people and use things but today we love things and use people.

Daniel 12:4 “But you, Daniel, shut up the words and seal the book, until the time of the end. Many shall run to and fro, and knowledge shall increase.”

Daniel was told that in the last days many will run to and fro and knowledge will increase. Daniel was told to seal up the book until the time of the end and that time, at least it appears, could be close. People are certainly running to and fro via the host of transportation options we have available and the Internet has helped increase knowledge worldwide but not necessary useful knowledge. But in Daniel’s day, it wasn’t time to reveal the end time events yet and so he was told “seal up the vision, for it concerns the distant future” (Dan 8:26b). 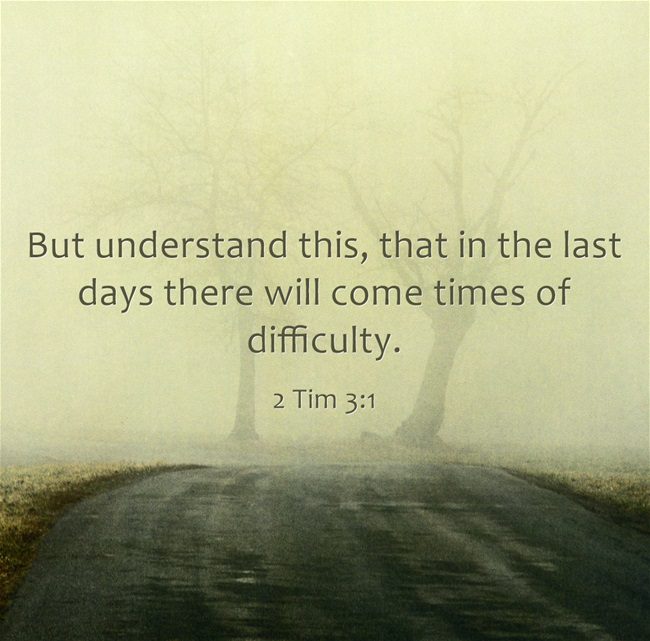 Matthew 24:21-22 “For then there will be great tribulation, such as has not been from the beginning of the world until now, no, and never will be. And if those days had not been cut short, no human being would be saved. But for the sake of the elect those days will be cut short.”

Returning again to the Olivet Prophecy, Jesus speaks about a time of tribulation unlike anything the world’s experienced before. Those days apparently would have to be cut short (supernaturally by God?), otherwise we’d likely wipe out all humanity off the planet but it was only for the “sake of the elect [that] those days will be cut short.”

Second Peter 3:3-4 “Knowing this first of all, that scoffers will come in the last days with scoffing, following their own sinful desires. They will say, “Where is the promise of his coming? For ever since the fathers fell asleep, all things are continuing as they were from the beginning of creation.”

In the Apostle Peter’s last letter, he tried to warn the church that people would come and scoff at the ideas of Jesus’ return and say “all things are continuing as they were from the beginning” and nothing’s going to change but “While people are saying, “There is peace and security,” then sudden destruction will come upon them as labor pains come upon a pregnant woman, and they will not escape” (1st Thess 5:3).

Luke 21:11 “There will be great earthquakes, and in various places famines and pestilences. And there will be terrors and great signs from heaven.”

The parallel to this passage is close to that of Matthew 24:7-8 where it’s written, “For nation will rise against nation, and kingdom against kingdom, and there will be famines and earthquakes in various places. All these are but the beginning of the birth pains.” When Jesus says that there’ll be “great earthquakes” I don’t think He means the typical earthquakes that occur on the earth every day and every year. This quake may cause famine and pestilence because of the widespread destruction and if that weren’t enough, “there will also be terrors and great signs from heaven.”

Jude 1:18-19 “In the last time there will be scoffers, following their own ungodly passions. It is these who cause divisions, worldly people, devoid of the Spirit.”

Jude also mentions scoffers in the end times just like the Apostle Peter did. He said that in the last times, there will be scoffers who are following their own sinful passions and they love to cause division but have the absence of God’s Spirit, meaning this is the condition of the lost world and not the church. Jude is simply warning the church to prepare for such a scenario.

The last thing might be the most important thing and it concerns what Jude wrote, “Behold, the Lord comes with ten thousands of his holy ones, to execute judgment on all and to convict all the ungodly of all their deeds of ungodliness that they have committed in such an ungodly way, and of all the harsh things that ungodly sinners have spoken against him” (1:14-15). You don’t have to be among the ungodly because God has made it possible to have a relationship with Him through the death of Jesus Christ. There is no more separation as a result of our sins (Isaiah 59:2) for all who have repented and trusted in Christ.