Here are seven Bible verses to not take literally.

Mark 9:47 “And if your eye causes you to sin, tear it out. It is better for you to enter the kingdom of God with one eye than with two eyes to be thrown into hell.”

C.S. Lewis once said “All good allegory exists not to hide, but to reveal, to make the inner world more palpable by giving it an (imagined) concrete embodiment” and so it is with some of the Bible verses in Scripture. [1] We use analogies all the time like “this just kills me to do this” or “that just knocked them dead” and so that is the way to read the Bible. Look at the context and the subject matter and see if it is being used as an analogy or as hyperbole or as an extreme exaggeration, as in the case here with Mark 9:47.

John 6:51 “I am the living bread that came down out of heaven; if anyone eats of this bread, he will live forever; and the bread also which I will give for the life of the world is My flesh.”

This is one of the so-called “hard sayings” of Jesus and when they heard this, they couldn’t understand what He was saying and so, “Jesus, conscious that His disciples grumbled at this, said to them, “Does this cause you to stumble” (John 6:61) and so “As a result of this many of His disciples withdrew and were not walking with Him anymore. So Jesus said to the twelve, “You do not want to go away also, do you?” Simon Peter answered Him, “Lord, to whom shall we go? You have words of eternal life” (John 6:66-68). 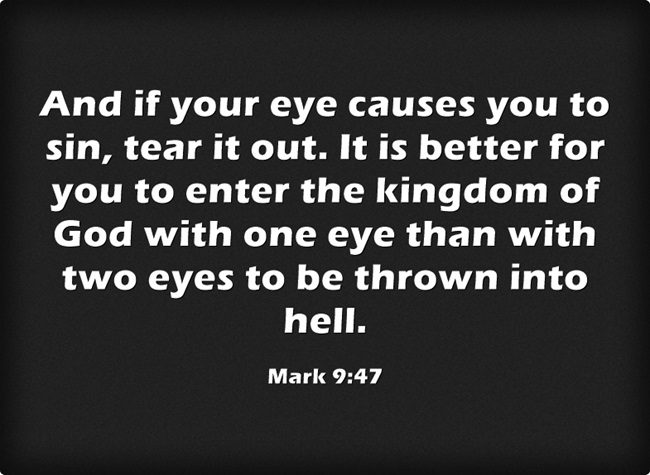 Luke 14:26 “If anyone comes to me and does not hate his own father and mother and wife and children and brothers and sisters, yes, and even his own life, he cannot be my disciple.”

Obviously, we can’t take this saying of Jesus literally because we are told to love one another and particularly parents as we’re commanded to honor our father and mother just as the Apostle Paul wrote “Honor your father and mother”—which is the first commandment with a promise— “so that it may go well with you and that you may enjoy long life on the earth” (Eph 6:2-3). The idea is to compare and contrast the love we have for our parents with that of our love for Jesus Christ of which is to be above all others (Matt 6:33).

Mark 9:45 “And if your foot causes you to sin, cut it off. It is better for you to enter life lame than with two feet to be thrown into hell.”

Again, Jesus is using an extreme example to show the priority that the believer must have in overcoming an ongoing sin. If someone is hooked on pornography, an example of cutting of the Internet altogether might be necessary. If Internet pornography is causing someone to stumble and abide in sin, perhaps the best thing that they can do is to get rid of it. Isn’t it better to get rid of the Internet (“cut it off”) than to remain trapped in a habitual sin?

John 6:54 “Whoever feeds on my flesh and drinks my blood has eternal life, and I will raise him up on the last day.”

In the early days of the church, the Christians were accused of cannibalism as the church was thought to literally be eating flesh and drinking blood but Jesus is saying that whoever does not partake of His flesh and His blood has no part of Him. This is an early picture of the Lord’s Supper or Communion and those listening to Jesus had no clue what He was saying, therefore “many of His disciples, when they heard this said, “This is a difficult statement; who can listen to it” (John 6:60) and followed Him no more.

Matthew 26:26-28 “Now as they were eating, Jesus took bread, and after blessing it broke it and gave it to the disciples, and said, “Take, eat; this is my body.” And he took a cup, and when he had given thanks he gave it to them, saying, “Drink of it, all of you, for this is my blood of the covenant, which is poured out for many for the forgiveness of sins.”

This is where Jesus institutes the New Covenant of the Lord’s Supper or Communion. Obviously, it isn’t literally eating Jesus body or drinking His blood because He was still there in the flesh. The symbolism is that His body was broken for them and His blood was shed for them for the remission of sins, but more than just for them, Jesus’ blood was literally “poured out for many for the forgiveness of sins.”

Matthew 8:21-22 “Another of the disciples said to him, “Lord, let me first go and bury my father.” And Jesus said to him, “Follow me, and leave the dead to bury their own dead.”

Obviously, a dead person cannot bury another person who is dead, so what does Jesus mean “leave the dead to bury their own dead?” Perhaps, these are those who are spiritually dead as the man who wanted to follow Jesus first wanted to wait for his father to die, perhaps to acquire his inheritance, showing that the man thought more of money than He did following Jesus so Christ said “Whoever loves father or mother more than me is not worthy of me, and whoever loves son or daughter more than me is not worthy of me” (Matt 10:37) and this would include the love of money.

The idea behind hard sayings of the Bible or not taking everything literally is not much different from the way we use language in hyperbole or exaggeration in our own language. We do it all the time, so the key is to look at the context of the chapter or paragraph and see the context within the whole to gain an understanding about what was actually being said. Context is always king because when text is taken out of context and used for a pretext, you usually end up with a false one.