5 Signs You Are In A Cult Being Called A Church

Here are five signs that you are in a cult and not the true church of Jesus Christ.

The definition of a cult and a true church of Jesus Christ are nearly opposites of one another. A cult can have deviant behavior and doctrinal practices that are radically different from the mainstream church. Their beliefs and practices are problematic when contrasted and compared with the first century church and many churches today. The word “cult” comes from the Latin word “cultus” which means “inhabited, cultivated,” or “worshiped” and stems from the word “culture” itself. A cult holds to unorthodox and esoteric beliefs and typically those in a cult have a devotion to a person or a set of new ideas that are much different from following the local church leadership or their teachings. They usually claim themselves as the one true church but they are often isolationists and very controlling of members. Some who have come out of cults have said that they were brainwashed, threatened, and even held against their will when trying to leave. Cults are all around us and here are five signs you might be in a cult or know someone who is in one in order that you might steer clear of them or warn those who are in one.

I can’t even count the number of people from cults who have stated that they received new revelation from God or that God has shown them a new doctrine, even though this is contrary to what the Bible teaches that we are “to contend for the faith that was once for all delivered to the saints” (Jude 1:3) not for the faith that is still being delivered. One man told me that “God spoke to me and wanted me to tell you that you’re not a pastor but a prophet” to which I should have said “God spoke to me too…through His written Word to stay away from you.” If God wanted to speak to me, why would He use a 3rd party to do it? God does still speak to us today but it’s not through new revelations or new truths that people say that they have received from God but the truth that’s already been given through Jesus Christ and the Word of God. The Book of Jude is about apostasy and he wrote that “you must remember, beloved, the predictions of the apostles of our Lord Jesus Christ” that “In the last time there will be scoffers, following their own ungodly passions” (Jude 1:17-18) and that day has come. 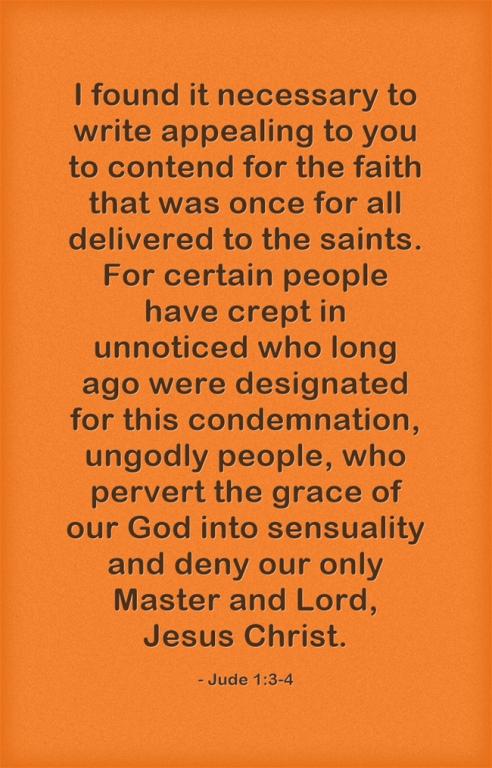 There are serious problems with cults today because they are polluting the faith once delivered and delivering their own manmade doctrines but these are really doctrines of the Devil and what they teach is not the way of salvation but the way of man. The Apostle Paul warned the church at Corinth by telling them that “if someone comes and proclaims another Jesus than the one we proclaimed, or if you receive a different spirit from the one you received, or if you accept a different gospel from the one you accepted, you put up with it readily enough” (2nd Cor 11:4) and to the Galatians, “I am astonished that you are so quickly deserting him who called you in the grace of Christ and are turning to a different gospel— not that there is another one, but there are some who trouble you and want to distort the gospel of Christ. But even if we or an angel from heaven should preach to you a gospel contrary to the one we preached to you, let him be accursed” (Gal 1:6-8).

As I wrote earlier, cults often control their members and keep them prisoners by use of threats, coercion, or by force (in some cases). Cults or the cult leader demands absolute, total control of everything and tells any members who disagree with them that they are destined to hell if they don’t follow what the leader says. This control extends to every single member of the cult and sometimes this domination comes through fear, threatening the loss of salvation if you leave the group, and even physical threats. There indoctrination is often a type of brainwashing, and often, every single aspect of the cult member’s lives are monitored and often called into question. There is a loss of privacy, free thought or expression of beliefs, and some would even describe it as living in a communal or compound. Few are let in and few escape. Make no mistake about it; Satan has his own churches.

Many of the cults that I have studied have many things in common. One of those is that they seek to isolate the cult members from the rest of the world and particularly from other churches. They also want to make them dependent upon the cult or the cult’s leader for everything they need. They can use guilt, threats, intimidation, and use psychological, emotional, and intellectual to get across their despicable agenda. Some cult members are asked to do things that are contrary to the law and so one sign of being in a cult is that they are sometimes asked to do things that violate their own consciences and are contrary to biblical teachings that we must live in obedience to the laws of man (Rom 13:1-5).

If you know of anyone that’s in a cult, you must warn them to flee because there is no salvation in a false gospel that doesn’t fully depend upon the free gift of God for salvation (Eph 2:8). Some cults teach that we are to observe the holy days and to keep the Sabbath which the Old Testament always directs to “the children of Israel” or “To you O Israel.” These teachings can include observance of Old Testament laws like clean and unclean foods, circumcision, keeping certain holy days of the Jews or the seventh-day Sabbath but these are actually legalists much like the Pharisees who saw the Old Testament law keeping as the only way to be saved even though the Bible teaches just the opposite (Eph 2:9).

March 24, 2016
What Are The Responsibilities Of A Church Elder?
Next Post