Here are seven Bible verses that speak about keeping a secret.

I do a lot of counseling but I keep those things that people share with me in strict confidence because they trust me to not repeat it before others. If I did, I’d lose their trust, but they’ve come to trust me enough to know that I don’t spread gossip or repeat a matter that’s been spoken to me in confidence. If it does happen to others, they must realize that “a whisperer (a gossip) separates close friends,” and sometimes for life.

Romans 1:29-30 “They were filled with all manner of unrighteousness, evil, covetousness, malice. They are full of envy, murder, strife, deceit, maliciousness. They are gossips, slanderers, haters of God, insolent, haughty, boastful, inventors of evil, disobedient to parents.”

This is the age where there are few secrets and almost everyone is sharing their “juicy tidbits” with others, but this is clearly sin because the psalmist writes that “Whoever slanders his neighbor secretly I will destroy. Whoever has a haughty look and an arrogant heart I will not endure” (Psalm 34:13). The works of the flesh that the Apostle Paul is describing, describes perfectly the world in which we live, but we are not of the world, even though we are in the world, and we should most certainly not participate in their sins and gossip because they are called slanderers and haters of God, apparently, because they don’t care what God’s Word says about keeping secrets that others tell us.

Proverbs 26:20 “For lack of wood the fire goes out, and where there is no whisperer, quarreling ceases.”

The ironic thing is if someone gossips too you they are likely gossiping about you. Think about that the next time someone gossips to you. Here’s my cure for gossip. If someone comes up to you and tells you something about another person who’s not there, promise to pass this on the other person out of concern for them or better yet, tell them “Hey, there they are over there. Let’s go and tell them the same thing you told me to see if we can help them.” Nobody has taken me up on that yet! When there is no fire (gossip) on the wood (before people), the fire dies out. Let it die out with you! 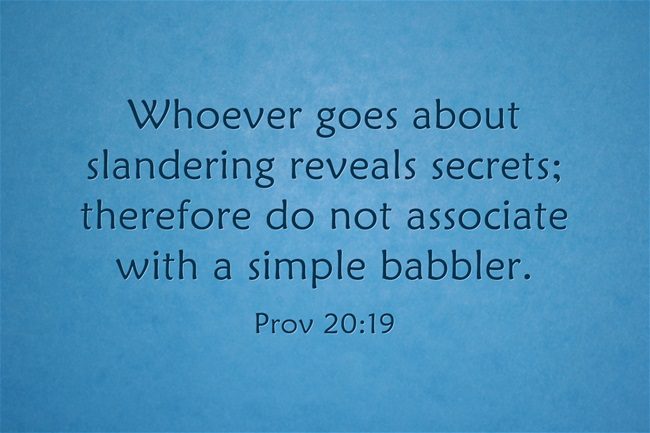 Proverbs 17:9 “Whoever covers an offense seeks love, but he who repeats a matter separates close friends.”

This is love; love doesn’t repeat an offense, sin, or other private matters to others but those who do so end up doing their friends or others great harm. Love seeks to cover offenses and doesn’t repeat matters to others. Love should motivate us to not ever gossip about people because they love them enough to respect their privacy. Its gossip anytime you speak about someone else and they’re not there…unless it is something that builds up that person.

Exodus 32:1 “You shall not spread a false report. You shall not join hands with a wicked man to be a malicious witness.”

The command to not gossip, lie, or spread something that’s not true has been around since the Ten Commandments. To spread a false report is to lie or be a false witness and all liars will end up in the lake of fire (Rev 21:8). When we do spread false reports, we are actually joining hand “with a wicked man (or woman) and being a “malicious witness” and that does much harm to our neighbor and breaks the command to love our neighbor as ourselves.

Proverbs 11:13 “Whoever goes about slandering reveals secrets, but he who is trustworthy in spirit keeps a thing covered.”

Good friends keep one another’s secrets and don’t’ share it with others. They keep a lid on things that they know about their friends, sins included, but whoever reveals what is supposed to be secret is anything but trustworthy. Sometimes, that gossip returns to the person it was about and that can destroy relationships permanently.

Proverbs 20:19 “Whoever goes about slandering reveals secrets; therefore do not associate with a simple babbler.”

The Bible sees a person who reveals secrets as someone who is slandering another person’s reputation. In some cases, civil lawsuits can be initiated and the person who is slandering someone can face penalties of the law. Solomon’s advice is “do not associate with” them because they’re a slanderer and a “simple babbler” that does no one any good whatsoever.

If you or someone else you know is a gossip and doesn’t keep a secret that a friend shared with you or them, we do not love our neighbor as ourselves. Jesus said “And as you wish that others would do to you, do so to them” (Luke 6:31) and surely we wouldn’t want someone passing along gossip about us would we? Why then would we do this to another. God will hold us accountable for every single, idle word at the judgment, or specifically, as Jesus said, “I tell you, on the day of judgment people will give account for every careless word they speak” because “for by your words you will be justified, and by your words you will be condemned” (Matt 12:36-37).