What Does The Bible Say About The Occult?

What Does The Bible Say About The Occult? May 17, 2016 Jack Wellman

What does the Bible say about the occult? A lot more than you might know.

What is the Occult?

The word “occult” comes from the Latin word for “hidden” or “secret” but doesn’t refer to scientific knowledge that’s hidden but knowledge of the paranormal and can include such things as magic, alchemy, extra-sensory perception, astrology, spiritualism, and divination and most often refers to magic or some supernatural power that is hidden from most people or is at least, secretive from the masses. The occult can also include those who are fortune tellers, do magic (both black and white), use Ouija boards, Tarot cards, spiritism, parapsychology, and Satanism. Recently, there has been a rapid rise in the interest of things of this nature and the occult is growing more quickly than some religions. There is something hidden in cults and it’s a danger of abominable practices which God condemns and promises a future so grim as to be indescribable for those who refuse to repent of this, as we shall see.

Isaiah the Prophet gives a serious warning about mediums that try to communicate with the dead and wrote, “And when they say to you, “Inquire of the mediums and the necromancers who chirp and mutter,” should not a people inquire of their God? Should they inquire of the dead on behalf of the living” (Isaiah 8:19)? The law of God strictly forbids such things as it is clearly spelled out in the Old Testament in the Book of Leviticus, “Do not turn to mediums or necromancers; do not seek them out, and so make yourselves unclean by them: I am the Lord your God” (19:31). The warning is so serious that Scripture says “If a person turns to mediums and necromancers, whoring after them, I will set my face against that person and will cut him off from among his people” (Lev 20:6). 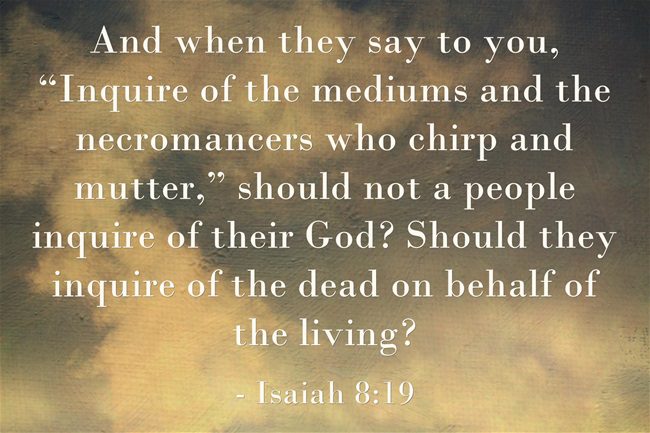 The Bible obviously has many places where the fate of those who dabble in spiritism or in the occult in the Book of Revelation, grouping them together with some of the most heinous of sins. The Apostle John writes that “the cowardly, the faithless, the detestable, as for murderers, the sexually immoral, sorcerers, idolaters, and all liars, their portion will be in the lake that burns with fire and sulfur, which is the second death” (Rev 21:8). The evil King Manasseh went too far into this realm and it was written of him, “And he burned his son as an offering and used fortune-telling and omens and dealt with mediums and with necromancers. He did much evil in the sight of the Lord, provoking him to anger” (2nd Kings 21:6).

We are without excuse because the Bible plainly states that “There shall not be found among you anyone who burns his son or his daughter as an offering, anyone who practices divination or tells fortunes or interprets omens, or a sorcerer or a charmer or a medium or a necromancer or one who inquires of the dead, for whoever does these things is an abomination to the Lord. And because of these abominations the Lord your God is driving them out before you” (Deut 18:10-12) and that we should not “listen to fortune-tellers and to diviners. But as for you, the Lord your God has not allowed you to do this” (Duet 18:14). Is this at least partially what Paul meant when writing to Timothy that “the Spirit expressly says that in later times some will depart from the faith by devoting themselves to deceitful spirits and teachings of demons” (1st Tim 4:10)? Quite possibly. When Paul and Barnabas encountered such evil, Paul said to Elymas the sorcerer. “You son of the devil, you enemy of all righteousness, full of all deceit and villainy, will you not stop making crooked the straight paths of the Lord? And now, behold, the hand of the Lord is upon you, and you will be blind and unable to see the sun for a time.” Immediately mist and darkness fell upon him, and he went about seeking people to lead him by the hand.” (Acts 13:10-11). When Paul was giving some of the fruits of the Spirit, he also gave fruits of the flesh which included “Idolatry, sorcery, enmity, strife, jealousy, fits of anger, rivalries, dissensions, divisions, envy, drunkenness, orgies, and things like these. I warn you, as I warned you before, that those who do such things will not inherit the kingdom of God” (Gal 5:20-21). The point Paul is making here is that none that do such things will “inherit the kingdom of God” but rather, reap the wrath of God (Rev 21:8).

There is no real excuse for those who participate in the things of this world such as occultism and its many deadly tentacles of deception. There is no reason that we need to know the future. God alone reserves that right for Himself. I believe that if God wanted us to know the future, He would have made it abundantly clear, but He did not. Instead, He gives a serious warning to everyone who practices such things that they will not “inherit the kingdom of God” and so this leaves us with only one other option, of which you can read about in Revelation 20:12-15.

May 17, 2016 Top 7 Bible Verses About Talking To God
Recent Comments
13 Comments | Leave a Comment
Browse Our Archives
get the latest from
Evangelical
Sign up for our newsletter
POPULAR AT PATHEOS Evangelical
1