Who Was John Wesley?

Who was John Wesley? What impact did he leave on the Christian world?

John Wesley (June 1703-Marcy 1791) was an Anglican minister and theologian who later, along with his brother Charles and Wesley’s fellow cleric, George Whitefield, formed a group called the Methodists or sometimes referred to as the Holy Club or Holiness movement. They were known for fasting twice a week and having diligent studies of the Bible. Wesley was born of Samuel and Susanna Wesley who were members of the Church of England early on. Wesley’s parents, like most parents at the time, educated their own children at home and of course this included a huge dose of biblical studies and reading. They taught their children Latin and Greek in order to help them learn portions of the New Testament. While the children were still young, there was a fire in the rectory (1709) and all of the children managed to make it out safely except John Wesley. He was left on the second floor with no escape possible until a fellow parishioner stood on another man’s shoulders and lifted young John out of the window. He never forgot that episode and was the main reason he referred to himself as “a brand plucked out of the fire,” quoting Zechariah 3:2.

In June 1720, John Wesley entered Christ Church School in Oxford, England where he attained a bachelor’s degree, and later, a master’s degree. In 1725 he was ordained as a deacon. In that very same year, Wesley read Thomas à Kempis and Jeremy Taylor who both inspired him to seek more biblical truth. This was the beginning of what is called the revival of the 18th century. Much of his learning prompted Wesley to form a “Holy Club” but they were derisively called “Methodists” by most due to their methodical studies of the Bible and their devotion to holiness. Not long after the Methodists were formed, they created social programs which included visiting Oxford prisoners, perhaps the first prison ministry ever. They taught the prisoners to read, help them gain an education, and even paid their debts off which was the reason many were imprisoned. Their social activities included gathering and distributing clothes, food, medicine and even books for the poor. 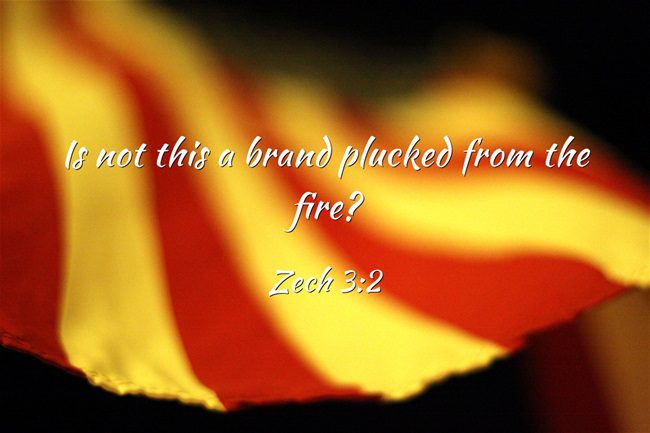 When Wesley’s father died in 1735, John Burton, a friend of his from Oxford, convinced him to oversee the lives of the colonists in Georgia and to also evangelize the local Indians there. His heavy handedness over the flock and greatly irritated the colonists and his attempt to evangelize Native American Indians also failed, so he returned to England a defeated man, however things were about to change for him. Wesley met Peter Böhler who was a Moravian, who helped him discovered the truth that had long since been buried and that was we are saved by grace alone through faith alone. He learned this through the biblical commentaries of Martin Luther, particularly in the Book of Galatians. From this point on, at age 35, Wesley felt compelled to share this “good news” of salvation by faith alone in Christ alone. This caused the Church of England to disfellowship him so Wesley gathered together scattered groups of the Moravians who also believed in faith alone and who detested the many traditions that the church’s had been practicing. To Wesley, there were more rituals and traditions than actual teaching of the Bible.

After Wesley gathered converts into societies for continuing fellowship and spiritual growth, he was asked by a London group to become their leader. When he began to preach outdoors he realized that open-air services were much more successful in reaching men and women than churches were because most of those he preached too would never enter most churches in England at that time, likely because they wouldn’t have been allowed in. For much of the remainder of his life, some fifty years, he would enter churches when he was invited or preach in the fields, in halls, cottages, and chapels because most churches would let him behind a pulpit. From 1739 onward, the Methodists began to be severely persecuted and Wesley was seen as a social threat by the Church of England. Many of England’s clergy began to attack his preaching. He was even accused of trying to reestablish Catholicism (which was certainly untrue). He saw most of the churches in England at the time as not even preaching about the need for repentance, confession of sin, living a life of holiness, and even worse, many were dying without ever hearing the true gospel.

During the waning years of Wesley’s life, he began to attack the evils of slavery and thus became an abolitionist, which was not popular at the time. He once said about slavery, “Liberty is the right of every human creature, as soon as he breathes the vital air; and no human law can deprive him of that right which he derives from the law of nature.” This drew into his circle of friends two powerful men who would do much to end slavery in England, and they were John Newton and William Wilberforce. It is believed that John Wesley simply wore himself out for the sake of the gospel as John Wesley travelled on horseback about 250,000 miles while he preached two or three times each day and gave away 30,000 pounds of his own personal wealth. During this time, Wesley preached more than 40,000 sermons. During his waning moments on earth, just before dying, he said “Farewell, farewell,” saying “The best of all is, God is with us,” and lifted his arms and raised his feeble voice again, repeating the words, “The best of all is, God is with us” and then shortly thereafter, passed into glory on March 2nd, 1791.

John Wesley left a huge impact on England and biblical doctrine as well as making a difference for those who would follow in his footsteps with the Methodist faith. Since he had given all of his wealth away, he died in near poverty but left behind some 130,000 Methodists and 541 preachers. It was said that after he died, he left nothing behind but the souls whom he managed to saved, thousands of like-minded believers, and the Methodist Church.