Leviticus 19:28 “You shall not make any cuts on your body for the dead or tattoo yourselves: I am the Lord”

Any time we look at Scripture, we must look at the context, but also to who it was written to. For example, the animal sacrifices commanded for Israel were expressly written to Israel, for Israel, so if we take these texts out of context and try to make them “the law” for everyone, then we’ll miss the point of the 19th chapter of Leviticus . We shouldn’t hold to a doctrine or belief system that is based upon one verse. When you take text out of context you can make it a pretext, and possibly a false one. Having said that, this verse was a command given to Israel and for Israel to abstain from appearing just as the pagan nations were and practicing the same things they did (Lev 19:29), and these included piercings, cuts, and tattoos. Some would argue that this is a command for all of us, but the context doesn’t seem to fit that belief.

Romans 14:4 “Who are you to pass judgment on the servant of another? It is before his own master that he stands or falls. And he will be upheld, for the Lord is able to make him stand.”

By the same standard that we judge others, so will we be judged. Those are the words of Jesus Christ in warning His listeners, “with the judgment you pronounce you will be judged, and with the measure you use it will be measured to you” (Matt 7:2). That should make us stop and think before we judge anyone but ourselves. I’m busy enough working on the man in the mirror than to worry about others, however, if I see my brother or sister falling into serious sin, I must try to restore them so they might repent, but this should always be done in a spirit of love and humility. In the end, they will stand before Christ, not me or you. God’s throne is a one-seater.

First Corinthians 6:19“Or do you not know that your body is a temple of the Holy Spirit within you, whom you have from God? You are not your own.”

This verse is used for a number of things. I remember hearing a couple of co-workers talking outside during lunch hour, and one guy asked his co-worker, “Do you think smoking is a sin?” The answer was, “Yes, of course it is. Don’t you know that your body is the temple of God” (as he stood there drinking a Coke and eating a candy bar). He was quoting 1st Corinthians 6:19, but it’s always best to look at the entire context of the chapter and not just one verse. First Corinthians chapter 6 is where Paul has been writing about the sexual immorality that had been going on in the Corinth church with a few members. He warned them, “the sexually immoral, nor idolaters, nor adulterers, nor men who practice homosexuality, nor thieves, nor the greedy, nor drunkards, nor revilers, nor swindlers will inherit the kingdom of God” (1st Cor 6:9-10), so clearly the context is about those things that Paul mentions that can defile our bodies and where the Spirit of God lives. I doubt very much he was talking about smoking, but for those to whom it is sin for them, it is sin (James 4:17). 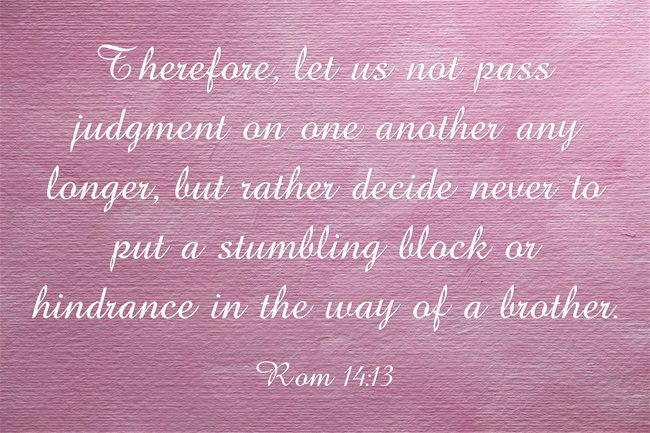 The Apostle Paul had a lot of freedom. Even when he was under arrest in Rome, he had the freedom to preach the gospel, and that he did (Acts 28:30-31), but he was not a lawbreaker. Paul confirms what he thinks about the authorities in Romans chapter 13, so the law that Paul is writing about in 1st Corinthians 10 isn’t the local law or Roman law, but the Jewish laws of clean and unclean foods. To him, all foods were declared clean, but to try go before a guest at dinner and say, “this was offered to an idol, but it’s been declared clean by God,” then this doesn’t build up. It might be lawful for you, but if it offends someone, then we shouldn’t do it. For those who believe in having piercings or tattoos, as long as their conscience isn’t troubled, for them it is okay, even if we don’t think so, however, if we not that much different from the world, or the world can’t tell us apart from Christian’s and the world, we’ve put our lamp under a table and our salt stays in the shaker.

Romans 14:10 is almost identical to Romans 14:4 which says, “who are you to pass judgment on the servant of another? It is before his own master that he stands or falls. And he will be upheld, for the Lord is able to make him stand,” so in these two verses, Paul repeats the question, “why do you pass judgment on your brother/another?” Paul also repeats the truth that they will stand before the judgment seat of God, meaning we’re not invited!

Leviticus 21:5 “They shall not make bald patches on their heads, nor shave off the edges of their beards, nor make any cuts on their body.”

Once again, context must be king, because this was written the priesthood of Israel, and applied to Israel. God wanted His chosen people to be distinct from the world and not look and act just like the pagan priests did, who went so far as to sacrifice babies. Of course the church should look and act different from the world, but this reference had to do with their hair cuttings and shaving for their religious rituals, so the cuts in their body and beards had application to their worshiping their gods, so I don’t believe we can use this verse on someone who may have part of their head shaven or bald patches or whatever the case may be. What a person looks like means nothing to God, to a certain extent; it is what is in the person, not what is on the outside of the person that matters to God. (1 Sam 16:7).

Romans 14:1 “As for the one who is weak in faith, welcome him, but not to quarrel over opinions.”

I think we are doing the Scriptures injustice when we try to take certain Old Testament verses and try to apply them to someone else’s life. Every believer grows at a different rate, and we’re not the Holy Spirit that comes along in the sanctification process. That’s not our job. I’m not qualified and I don’t think anyone else is either. God wants us to look at the whole book and the whole chapter and not be leaning on one verse to justify our judging others.

I believe that Romans chapter 14 should be a “must read” for every believer. It teaches us to not judge others over non-essentials, and to not enter into quarrels about disputable matters that, frankly, don’t matter. Paul insists, that “One person believes he may eat anything, while the weak person eats only vegetables” (Rom 14:2). The truth is, “each of us will give an account of himself to God” (Rom 14:12), and not give an account to a man or woman. They won’t be there for that. This is why we shouldn’t have to give an account for ourselves today, before others. Only if there is a serious, besetting sin should a believer intervene and only then following the biblical pattern of church discipline (Matt 18:15-20). “Therefore, let us not pass judgment on one another any longer, but rather decide never to put a stumbling block or hindrance in the way of a brother” (Rom 14:13).

November 26, 2016 Top 7 Bible Verses About Immigration
Recent Comments
15 Comments | Leave a Comment
Browse Our Archives
get the latest from
Evangelical
Sign up for our newsletter
POPULAR AT PATHEOS Evangelical
1