What seems to be a recent “hot button” issue was addressed thousands of years ago in Scripture and it was the fact that whenever a stranger joins the congregation, they are not to “do him (or her) wrong” but rather, “treat the stranger who sojourns with you as the native among you.” That means, “you shall love him as yourself,” or as Jesus said, “you shall love your neighbor as yourself” (Mark 12:31). God reminds Israel (and us) that we too “were strangers in the land of Egypt,” or for believer’s, we were once a people, not of God, but of the world (2nd Cor 4:3-4), and dead in our sins (Eph 2:1-2).

When Jesus was giving the church her marching orders (Matt 25:34-40), He included feeding the poor, visiting the sick and those in prison, and making strangers feel welcome, and some of those strangers may be people from a different nation. It doesn’t matter to Jesus because whatever we do for the “least of these,” His people, we are doing it unto Him (Matt 25:40), whether they’re immigrants or not.

Deuteronomy 27:19 “Cursed be anyone who perverts the justice due to the sojourner, the fatherless, and the widow.’ And all the people shall say, ‘Amen.’”

This is one of many places where God places a curse on anyone who does not ensure justice for the widows, orphans (the fatherless), and sojourners. They have just as much of a right to justice as do the citizens of this land. If any immigrant has entered the country and claimed the nation as his or her own, they are now part of this nation and as such, they have equal rights under the law. 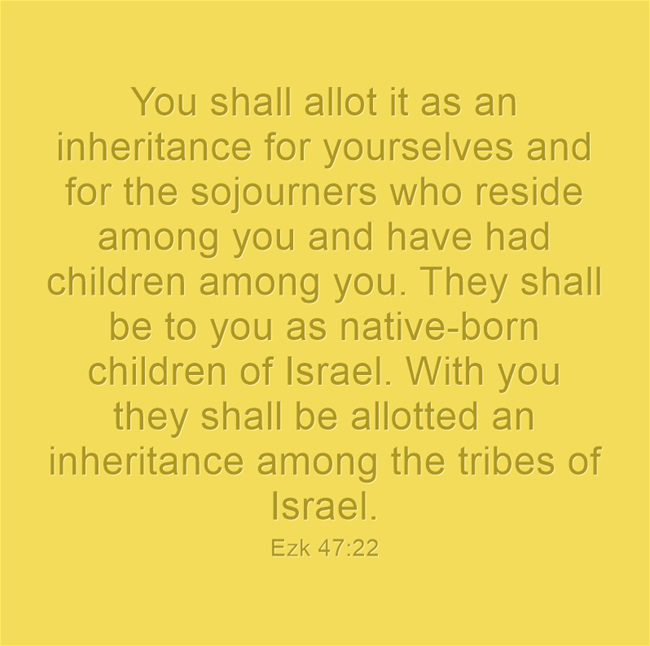 We can’t be showing partiality to anyone who is different from us. Skin color or national origin doesn’t matter to God and it should not matter to us either. What does matter is that we love others as we love ourselves and that we show hospitality to strangers, regardless of where they’re from.

Zechariah 7:9-10 “Thus says the Lord of hosts, Render true judgments, show kindness and mercy to one another, do not oppress the widow, the fatherless, the sojourner, or the poor, and let none of you devise evil against another in your heart.”

God has always been concerned about those who are on the fringes of society and are least able to defend themselves and their own rights, so God is speaking through Zechariah the Prophet that we are to render true judgments and not based upon who or what a person looks like. God is the defender of the widows, orphans, the poor, but also the sojourner. Besides, we too are sojourners because “our citizenship is in heaven, and from it we await a Savior, the Lord Jesus Christ” (Phil 3:20).

God wasn’t restricting people from other nations from joining the nation of Israel. Most people who don’t know the Bible that well believe that God was partial only to the nation of Israel, even though the Bible says He is no respecter of person (Acts 10:34), so neither should we have respect for one people over another. They too should be allotted the same rights as we have in this nation, just as in Israel, they were “allotted an inheritance among the tribes of Israel,” but they should do as the nation does and that is to live a life of obedience to God.

Jeremiah 7:5-7 ““For if you truly amend your ways and your deeds, if you truly execute justice one with another, if you do not oppress the sojourner, the fatherless, or the widow, or shed innocent blood in this place, and if you do not go after other gods to your own harm, then I will let you dwell in this place, in the land that I gave of old to your fathers forever.”

Jeremiah is describing part of the problem with the ancient nation of Judah and why they were about to be sent into captivity. They had not been executing justice equally, but rather, they had been oppressing the sojourner, the fatherless, and the widows. Jeremiah gave them ample warning before sending His judgment, but as we know, they refused to listen and were sent off into captivity.

The Old Testament and New Testament show that God accepts the person regardless of their background or their national origin. Just as it says in Leviticus 25:35: “If your brother becomes poor and cannot maintain himself with you, you shall support him as though he were a stranger and a sojourner, and he shall live with you” because God “executes justice for the fatherless and the widow, and loves the sojourner, giving him food and clothing” (Deut 10:18), so this is why in the coming Kingdom of God, or the New Jerusalem, that “people will come from east and west, and from north and south, and recline at table in the kingdom of God. And behold, some are last who will be first, and some are first who will be last” (Luke 13:29-30).