The Relationship Between The Good Shepherd And His Sheep

The Relationship Between The Good Shepherd And His Sheep January 10, 2018 Jack Wellman

Jesus is called the good shepherd, so why does Jesus use the analogy of His being a shepherd, and we being His sheep?

The Nature of Sheep

My uncle in Iowa raises sheep, and I can remember him saying a lot of things about his sheep; most of it bad. For one thing, sheep are defenseless against predators. They can’t fight back and they can’t outrun predators. They simply panic. They’re afraid of water and can only be led to still water by a shepherd (Psalm 23:2), and who can blame them? Sheep can’t swim. Imagine getting all that wool soaked, so they’re really good at doing two things in water…sinking, and drowning. They’re also very good at getting stuck on their backs and being totally defenseless. They can be frightened into having a heart attack by imagining a dog or wolf is going to attack, even if it doesn’t. And sheep must be led to green pastures (Psalm 23:1); otherwise they’d eat the grass down to the roots, destroying the pasture.

When Jesus spoke of Himself as the Good Shepherd, saying “Truly, truly, I say to you, he who does not enter the sheepfold by the door but climbs in by another way, that man is a thief and a robber. But he who enters by the door is the shepherd of the sheep” (John 15:1-2). The sheep can come in and go out, but only through the door, and He calls Himself the door. He is the one and only way in or out of the sheepfold (Acts 4:12), so only “To him the gatekeeper opens. The sheep hear his voice and he calls his own sheep by name and leads them out” (John 10:3). And just like my uncle’s sheep, they will not go up to anyone else…they will not follow anyone else. In fact, they’ll run away from anyone else. That’s why Jesus says, “A stranger they will not follow, but they will flee from him, for they do not know the voice of strangers” (John 10:5). In ancient times, when a shepherd laid down at night to guard the sheep, guess where he lays? Right at the door or the gate of the fence or pen. No one can come in or go out without going over or through the shepherd, including ravenous wolves, so He guards the sheep all night and feeds them during the day. They are all under His constant vigilance, just as believers are under Jesus’ constant care. He knows His sheep and knows that they can become restless, so the shepherd has to go slow in some cases to stay with the stragglers. He watches over them day and night, and only His voice do they know, and only His voice will they hear, and only His voice will they obey, but He also knows their voice (John 10:4). 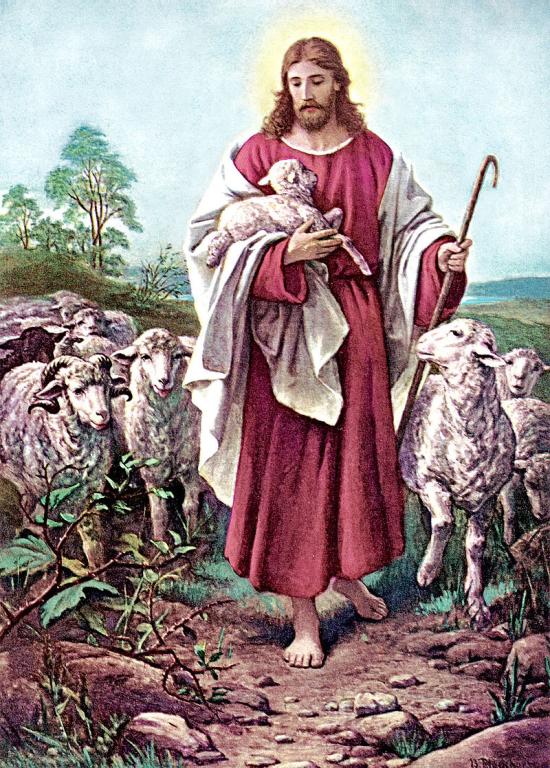 Do you see the analogy of a shepherd and Jesus being the Good Shepherd? Jesus is the True Shepherd who guards His flock, and that’s good because sheep are absolutely helpless and vulnerable without “The” Shepherd. Not just any shepherd will do. If a sheep falls onto its side, it can become turned upside down…and will die if not picked up and placed upright. It can literally starve to death or lay there, being vulnerable to predators. And we of His flock can fall down and be on our backs, helpless and vulnerable, but the Good Shepherd can set us upright again. Sheep, not being the most intelligent of animals, have been known to just walk right off a cliff, but the True Shepherd won’t let that happen as long as they are in His fold. And this shepherd gives peace to the sheep…He restores them and makes them lay down in green pastures to rest in Him (Psalm 23:1-2), so sheep must be led to green pastures or they’ll destroy the pasture. And since they have no natural defenses, no way to fight back, and are slow on foot, the shepherd is invaluable to the life of the sheep. We sort of adopted an old tomcat (or rather, he adopted us). He was abandoned in the middle of winter and so he will not let anyone else approach him or even get near him; not even within 50 feet. For some reason, I was the only one able to approach him, but it days of speaking to him in a soft, quite voice. It took a month or so before he finally trusted me. Today, he knows my voice and not that of a stranger, so I speak to him in a gentle, caring and soft voice, and he’s learned to trust me completely. Even around a blind corner where he can’t see me, if he knows my voice and he comes running. He knows I’ll feed and care for him, just as the sheep recognize the Shepherd’s voice and the Shepherd knows their voice and cares for them. So why would any sheep want to leave the flock, and by extension, their local church? Regardless of this, some do. And some wolves, cloaked in sheep’s clothing, or acting as another shepherd, can hurt the sheep. For one thing, he can be fleecing them, and since sheep are not that intelligent, they might fall for anything, however, the true sheep must learn to recognize the True Shepherds voice, and the Shepherds voice is found in the Word of God.

The shepherd cannot easily protect any sheep that don’t remain in the fold. And if they don’t hear the Shepherd’s voice often enough (Bible), after a while, they might not be able to recognize it at all. Then, these sheep then might follow any self-proclaimed shepherd, but here’s a given; no sheep can come into the flock without first going through the shepherd, so there is only one way to the flock and into the fold, and this is through the Shepherd Himself. There is no other way, there are no other paths, and there is only one door. Sheep that can do tricks or good deeds still can’t go into the fold except by the Good Shepherd. And He stands at the door to invite new sheep in and to keep the present sheep safe. He guards this door. In fact, you might say, He is the door. Thieves and robbers can scale the fence, but the Good Shepherd has authority and power to keep them out. If the flocks are the saints, the fence is the church, and Jesus is the door, when they go outside of this safe and secure environment they can get hurt, so He lays down at the door or gate of the pen to protect them. The True Shepherd literally laid down His life for His sheep and has purchased the sheep with His own blood (1 Cor 6:19-20, 7:23). They are His, and He is theirs. You must go through the Shepherd to join the flock of the Landowner (God), because He is the door. And if you knock, He will open. And you may come in, but only through Him. And with Him you shall remain, forever. Then you can say with the psalmist, “Surely goodness and mercy shall follow me all the days of my life, and I shall dwell in the house of the Lord forever” (Psalm 23:6).

Sheep are really good at just a few things. They are good at drowning, being defenseless, and being utterly dependent upon the shepherd. They do provide wool and meat, but they can’t even take credit for that since their Creator made them that way. Isaiah the Prophet nailed it when he wrote, “All we like sheep have gone astray; we have turned—every one—to his own way; and the LORD has laid on him the iniquity of us all” (Isaiah 53:6). Jesus knew the nature of people without a shepherd. Matthew wrote that when Jesus “saw the crowds, he had compassion for them, because they were harassed and helpless, like sheep without a shepherd” (Matt 9:36), and we’re helpless too…without Jesus as our Good Shepherd.

January 8, 2018
Four Things About Faith In God
Next Post