Seeing The Gospel In Biblical Accounts

The gospels contain accounts that are symbolic of salvation, but you can also find the gospel message within the gospels themselves.

Have you ever flashed your headlights to warn another driver to slow down because there’s a speed trap ahead of them? You are trying to warn them. A few might slow down if they’re breaking the speed limit, but not all, so that’s what the law of God does. It tells us what sin is (Rom 7:7), and reveals to us that we all break God’s law, so before we can give people the good news, we must tell them that no one deserves to be saved (Rom 3:10-12). We all fall impossibly short of God’s glory (Rom 3:23), so what’s the solution to our dilemma? When Jesus introduced the gospel, it had two components to it. He said we need to “repent and believe in the gospel” (Mark 1:15b). God commands all of us to repent (Acts 17:30), so if you don’t mention the fact that God requires all people to repent, and what it is they need to repent from, they will not hear the whole gospel. If sin is never mentioned, then grace means nothing, but when God’s wrath against sinners is revealed (John 3:36b), and“that the judgment of God rightly falls on those who practice such things” (Rom 2:2), then grace is suddenly very relevant…at least for some. Just like I was told, the sinner must know that it’s “because of your hard and impenitent heart you are storing up wrath for yourself on the day of wrath when God’s righteous judgment will be revealed” (Rom 2:5). If you had a disease and didn’t know it, you wouldn’t even think about seeking a cure, but once you heard the prognosis, then you’d suddenly become very interested in the cure. The disease that is fatal in the coming judgment of God which comes from sin that is not repented of (Rev 20:12-15; 21:8). The cure is trusting in Christ, Who gave His life as a ransom for many (Mark 10:45).

Now that the bad news has been revealed, the mercy and grace of God should get our attention. Of course, the person who comes to saving faith in Christ is first drawn to Father, but through Christ (John 6:44), and it is only by the Spirit of God that the conviction of sin comes (John 16:8), so when we finally come to understand that we cannot stand before God on our own, it makes us see that our only hope is Christ. After putting our trust in Christ, “There is therefore now no condemnation for those who are in Christ Jesus” (Rom 8:1), “since we have been justified by faith, we have peace with God through our Lord Jesus Christ. Through him we have also obtained access by faith into this grace in which we stand, and we rejoice in hope of the glory of God” (Rom 5:1-2). This is why there is such power in the Word of God. It has the very power of God that to save (Rom 1:16; 1 Cor 1:18). When a person is exposed to the Word of God, with the Spirit of God, they should reveal the Son of God. There are many biblical accounts where we see the gospel typified, but we can also see how salvation works within the gospel accounts themselves, and that’s what we’ll see next in Mark 2.

One example of the gospel message being within the gospel is in Mark 2. In this account, Jesus was in a home teaching many people. There were so many in the house “that there was no more room, not even at the door. And he was preaching the word to them” (Mark 2:2). When four men tried to bring a paralytic man to Jesus so He could heal him (Mark 2:3), there was no way they could even get through the door, so they had to take drastic action. The first point is that God uses others to bring people to Christ, and sometimes it takes drastic action (see first paragraph), but we have to understand that we don’t’ save anyone. The four men couldn’t save the paralytic. It had to be Christ alone, showing we are only saved by Christ alone (Acts 4:12), but God will use us as a means of His saving them. How? It’s by trying to bring them to Christ. God used these four men to bring this paralytic to Christ, and God can use you to bring people to Christ, so “when Jesus saw their faith, he said to the paralytic, “Son, your sins are forgiven” (Mark 2:5). Of course the self-righteous scribes were shocked, and said, “He is blaspheming! Who can forgive sins but God alone” (Mark 2:7b), not recognizing Jesus is God and He can forgive sins. Jesus tells them to their face, “that the Son of Man has authority on earth to forgive sins” (Mark2:10), but to the paralytic, a paralytic no more, He says, “rise, pick up your bed, and go home” (Mark 2:11). The man needed healing…but he needed the forgiveness of sins infinitely more. The healed man will die again…but the one who trusts in Christ receives eternal life. 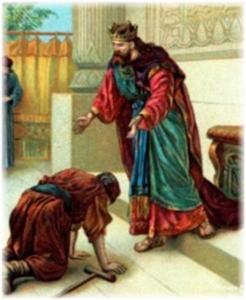 The Old Testament has historical accounts that are also symbolic of salvation. One example is Mephibosheth. He was the lone son remaining from the house of Saul who was the son of Jonathan. Jonathan was a man that David had trusted with his life. He loved him as he did his own self. In this account, you can see King David as typifying the role of the Father, as David sought out Mephibosheth, not to kill, but to preserve his life (2 Sam 9:5; John 6:44). Mephibosheth did nothing to deserve David’s kindness (2 Sam 9:6-8), and we too received God’s kindness, even though we did not deserve it (Rom 5:6-10; Eph 2:8-9). Mephibosheth was seated with the king and sat at the king’s table as one of his own sons. In similar fashion, after we trust in Christ we become a child of God. King David made sure that Mephibosheth would be provided for, for the rest of his life, just as those who trust in the King of kings can rest in eternal life (2 Sam 9:7-9). The gospel message, or salvation, is often found in the accounts recorded in the Bible, and there are many, not the least of which is Abraham’s willingness to sacrifice the son of promise.

I have started looking for other gospel-like accounts in the Bible, and I’ve discovered there are many…more than I had imagined, but the gospel often rests within the Word of God with accounts that typify salvation. The Gospel of John may have more of these than the other gospels, like the account of Lazarus who was dead, but made alive by Christ (John 11). The gospel is actually spread throughout the Bible, starting with the first hint of redemption in Genesis (Gen 3:15), and Abraham’s being saved by faith. Abraham “believed the Lord, and he counted it to him as righteousness” (Gen 15:6). If you haven’t already, I hope you will obey the Lord Jesus Christ’s command to repent and believe the gospel (Mark 1:15). Then you too can have the righteousness of Christ (2 Cor 5:21), and you can stand before God on the day of Christ’s visitation, or after death, when it’s appointed for us to be judged (Heb 9:27).

leaders in the time of Christ | 3rd...
Who are the leaders at the time of Christ? Is there a...
view all Evangelical blogs
What Are Your Thoughts?leave a comment
Copyright 2008-2021, Patheos. All rights reserved.