I’m baaaaack…from my vacation that is. Thanks so much to Phil Snider, Linda Brendle, Andy Campbell, Eric Elnes and Margot Starbuck for contributing guest pieces while I was away.

Though I’m physically back in the country, I’m hardly caught up enough to formulate a cogent blog post today. So I decided to share a piece from my friend Doug Hagler, who is a Presbyterian minister and one of the trio making up Two Friars and a Fool. His piece on racism is an important reminder of the essential shortcomings we’ve all yet to overcome in our lives and culture.

I’m a Racist, and So Can You

Today (3-7-13) I saw an article in my Facebook feed, a guest op-ed article in the New York Times written by Ta-Nehisi Coates. The article was entitled, “The Good, Racist People,” and it had to do with an incident wherein Forest Whitaker was frisked in a Manhattan deli. It of course went beyond this, to address the fact that racists believe that they are good people. Upright, moral citizens who are trying to be good people like most of the rest of us also happen to be racist. I am one of them.

Let me explain. I have deeply-held progressive convictions on most issues. I am one of those good people, or I try to be, that Coates is addressing in his article. I like to think that I do not act differently towards people of color. I have served very diverse communities as a chaplain and pastor, and I have never been told that I behaved inappropriately toward anyone, including people of color. When I say that I am a racist, what I mean is that I was raised in a neighborhood, and attended schools, where racism was easily discernable. (I still remember a swastika burned into the inside of the wooden door in the men’s room in my high school, so it didn’t take much discernment.) I know what my thoughts are like, and sometimes the first thing I jump to, before I have time to reflect, is a racist conclusion. I know I’m not alone, but that’s not an excuse.

I am an ordained minister in the Presbyterian Church (USA), a denomination of Reformed Christians, meaning we like to talk about the theology of the

Reformation, particularly John Calvin. One of the central tenets of Reformed theology is “utter depravity”, meaning that we are messed up, to some degree, in every part of our lives, in a way that cannot be fixed by our own effort. Were you to ask anyone who knows me, they would tell you that I am not a very good Presbyterian, and that I am not very Reformed. I am content to cling to the edge of my denomination, understanding that what brings us together is more than mere agreement on theological or philosophical details.

As a bad Presbyterian, I am not a huge fan of utter depravity. I don’t talk about it, except in the historical sense of: “This was a core belief of the Reformers.” The reason I don’t bring it up much is that I think way too much has been made of what’s wrong with us and not nearly enough about what is right with us. Among the other things it does, the church manufactures misery and guilt and shame, and has for a long time. While there are some things that rightly make us miserable, guilty or ashamed, that incessant drum-beat just got old for me, and I know it has damaged many people, so I don’t join in.

Depravity still comes up, though, in things like my own racism. (You win this round, John Calvin.) It also comes through in the inability of even reasonably

intelligent people to see that our society is profoundly racist. No one who knows anything about the justice system, or the prison system, or research into wealth disparity could possibly conclude that our society is not deeply racist – albeit less outwardly so than in the past. Far from being better than society overall, the church is almost always worse. Sunday morning still contains the “most segregated hour in America” – the hour of worship in Christian churches. Having more than one ethnicity in one’s church is enough to have bragging rights, I’m ashamed to say, in church-world. But I digress.

Being locked in racism, conscious and unconscious, is not an inevitable situation. This is a battle I think we can win, in time. We can’t fix people completely, and we can’t fix the entirety of society, but bit by bit we can make things more equitable. In order to do that, however, we have to be honest about who we actually are. One big reason that I understand racism to be real, apart from the main reason which is the overwhelming testimony of people of color, is the fact that I am a racist myself. The difference is that I see it, I really don’t like it, and I struggle against it. I know that I don’t get to skip to the end of this struggle without doing the work, and that I need to listen when people tell me there is more work to do. Even if John Calvin is right, and I am utterly depraved, that doesn’t mean I can’t change anything, it just means I can’t change everything. But in my own small way, I can change this, and so can you.

March 9, 2013
The Nones, The League & Death of the Nuclear Family
Next Post 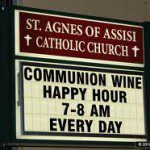