What Are You Putting Between Yourself and God? Unmasking the Idols in Your Life

Though we modern folk believe we’re much smarter and less gullible than, for example, the Israelites who lived thousands of years ago and built themselves a golden calf to worship, we are in fact just as willing to bow down before false gods as they were. Our tendency to do so may be even more dangerous, however, because we’re usually clueless about what we’re doing. 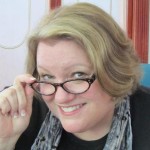 In that sense, Elizabeth Scalia’s new book – “Strange Gods: Unmasking the Idols in Everyday Life,” – is alternately a gentle, Christ-like wake-up call, and a necessary smack in the head to a culture that’s blind to – and sometimes even celebrates – its own brokenness.

The book’s title is a reference to the First Commandment: I am the Lord, your God, you shall have no other gods besides Me. Why is that the primary Commandment among the 10? In “Strange Gods,” Elizabeth explains:

“God, understanding our self-interested natures better than we do, first sets up proper relationships: Love God, have no other gods, keep the Sabbath holy, and honor your parents. God then gives commandments to save us from ourselves: Don’t kill, don’t debase yourself or others, don’t steal, don’t lie or gossip, and don’t covet…

“What we seldom realize is this: all of the commandments are simply an expansion of the very first commandment…This command is given primacy not because the Creator is insecure and in constant need of attention, but because it is the one commandment that, if obeyed, renders all of the others nearly moot. Were we not continually making idols of the objects of our desire…nothing would be cluttering up the space between ourselves and God…The ‘you shall nots’ are less a list of restrictions than an invitation to keep turning back to God, who will ‘satisfy the desire of every living thing.’ (Ps 145:16)

In the book, Elizabeth reveals how we make gods of ideology, money, technology, sex, plans, love of self and more. She doesn’t do this as someone who looks down on others for their faults. First and foremost, the person she points her finger at is herself in her ongoing struggle against her own personal idols.

During an interview on Christopher Closeup, Elizabeth (a.k.a. The Anchoress, our fearless Blogmother here at the Patheos Catholic portal) admitted that her idols include “complaining, kvetching, bellyaching,” being “a bit of a brawler,” an over-reliance on social media, and reducing people to labels.

She also commented on a method of idolatry that’s all too common: “We can really wallow in our troubles and the instances where we’ve been sinned against, and turn that into an idol where we can’t find God or healing because we’re so busy licking our wounds and feasting on them, in a sense.”

Visualizing the false gods in her life helped Elizabeth start to deal with them. She said, “[Imagine] God is on a mantle. Then picture you bringing something else – whether it’s the love of your life or your political affiliation or whatever you’re passionate about – and literally setting that before Him so that now there’s a barrier. So you’re here, God’s over there, and in between you is this thing. To me it became an understanding of a metaphysical physical placement.”

Another help has been a quote by St. Gregory of Nyssa who once said, “Ideas create idols; only wonder leads to knowing.” Elizabeth notes that she often comes to wonder through gratitude and an awareness that she hasn’t done anything to earn God’s mercy.

She said, “When I take a moment to sit still, I say to myself – I’m raising this cup of coffee to my lips right now. I can do this on my own, unassisted. I don’t have to have someone feeding it to me…I can look outside my window and see something beautiful. And I’m not grateful enough for these gifts. They’re simple and fundamental. Be grateful for the fact that your lungs can move unassisted and you can breathe. When you bring it down to that level, you start to get a perspective on what else is getting in the way between my gratitude toward God and the graces that He bestows upon me.”

Invoking the presence of God was an idea that was brought home to Elizabeth when she and her husband arranged for a police officer to talk with a teen group at their church. The officer said that every time he gets called to a domestic disturbance, he asks Jesus to stand in between the couple who are fighting. The reason: “[Jesus] is peace, and He will bring His peace into this situation in one way or another.”

Elizabeth explained, “[The officer] said this has never failed and he actually uses this in his life now. I do too… Even when I’m in a grocery store and I see something like a kid yelling at the mother, I’ll think, ‘Jesus, stand between them.’ I think it’s because I’m a Benedictine Oblate. The Rule of St. Benedict teaches us to invite God into every situation.”

The strength of that approach is that it keeps us focused on the fact that human beings are three-dimensional, not one-dimensional. The concept of defining someone by a label is a particular pitfall for people who spend a lot of time on blogs, Facebook and Twitter.

Elizabeth noted, “Kierkegaard said, ‘The minute you label me, you negate me.’…And I came to a decision through prayer, saying, ‘God, I want to love again.’ I don’t want to have all of this kneejerk disgust towards others who I don’t even know. Terry Pratchett wrote a book called ‘Carpe Jugulum.’ In it, one of the characters…says, ‘Sin is when you treat another person like a thing.’ It’s true, and we do that continually on social media…Everybody is breaking up into smaller and smaller cliques and making their mindset very exclusive, to the point where if you disagree with one point of it, you’re out. It’s got this strange effect of making this vast communication tool into something really small…We miss sight of the person in front of us. When we do that, we miss sight of Christ because – and this is St. Benedict – we are meant to find the Christ in each other. If we’re immediately discarding their personhood, there’s no way we can find Him.” 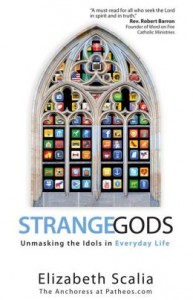 Part of the reason for that is our distorted modern definition of love. “Love is the constant turning and saying yes to something that is outside of yourself,” Elizabeth said. “That is really difficult, particularly for us today because we are turned inward and we’re celebrating ourselves, we’re fascinated by ourselves. When you’re doing that, you have a distorted sense of love because it’s all polluted by that inward self worship. And that takes us right back to Eden. That was the serpent’s thing: eat and you can be as gods. And we’re still there. All these millennia later, we’re still there.”

In the end, Elizabeth hopes that “Strange Gods” provides an antidote to that way of thinking: “I hope [the book] makes everybody take a second every day to look at what they’re doing and say – Is [something standing] between me and God? And if it’s standing between me and God, isn’t it something that I should move to the side so I can look at Jesus and have that relationship with Him that He is constantly calling me toward?” 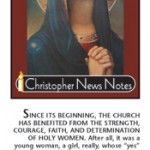