Actress Bonnie Hunt’s Brother and a Catholic Priest Are Saving Lives in Uganda May 3, 2013 Tony Rossi 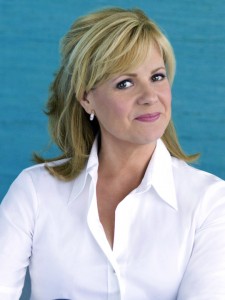 You likely know Bonnie Hunt from her years as a talk show host and from her roles in popular movies like “Cheaper by the Dozen,” “Jerry Maguire,” “The Green Mile,” “Return to Me,” “Cars,” “Dave” (“We’re walking, we’re walking”) and more. Well it turns out that Bonnie has a brother who is quite accomplished too, just in a different field. 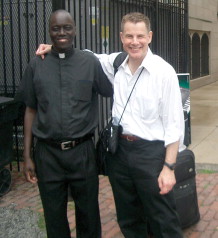 Dr. Kevin Hunt practices Internal Medicine in Chicago and serves as a faculty member at Northwestern University Feinberg School of Medicine. In 2007, he took a trip to Northern Uganda with Father Samuel Okori, “a Catholic Ugandan priest and medical student studying for his medical degree in the United States.” As a result of that trip, MANU (Medical Aid to Northern Uganda) was born. The charity’s website explains:

The first priority of the foundation is to improve the present medical facilities and to provide adequate health services to the people of Northern Uganda. As a result of this endeavor, MANU is reaching out to the international community for help in terms of providing help to fund medical equipment, personnel and health care supplies to Northern Uganda.

The people of northern Uganda have suffered and continue to suffer as a result of the rebel activity of the LRA since1986 which has made the people victims of poverty, diseases, ignorance and the ravages of the guerilla warfare.

Our organization strongly believes that if the people are empowered to live transformed lives, lives free of poverty, lack of education, and disease, they must have access to the basics such as water, medicine, education and other forms of sustenance.

As reported on the MANU website, Dr. Hunt, MANU Board member and pharmacist Nicole Schreiner, and several volunteers will be traveling to Northern Uganda later this month to provide medical care to people around the Catholic Diocese of Lira. Their work and fundraising over the past several years has already provided many medical supplies to the people of Lira, and they’ve built a Radiology wing onto a hospital there. Now they’re trying to raise money for an X-Ray machine.

It’s obvious that Bonnie isn’t the only star in her family. Kudos to Dr. Kevin Hunt and Father Samuel Okori on being Christophers (Christ-bearers) to Uganda’s people in need. If you’d like to help out MANU, you can do that here.

For more background, here are two clips from “The Bonnie Hunt Show” from a few years ago that were posted on Facebook featuring Dr. Hunt and Father Okori discussing their work (plus it may be the only video you ever see of a priest sliding down a fireman’s pole): 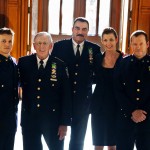 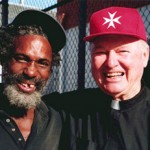 May 9, 2013 The Legacy of Father Dollar Bill
Recent Comments
0 | Leave a Comment
Browse Our Archives
get the latest from
Catholic
Sign up for our newsletter
POPULAR AT PATHEOS Catholic
1