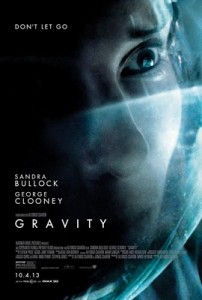 Silence is all astronaut Dr. Ryan Stone (Sandra Bullock) wants since her heart and soul were destroyed following the death of her four-year-old daughter in a freak accident.  Stone exists, but doesn’t live.

That’s why her first mission to space seems to be ideal.  She’s surrounded by the peace and silence she craves – except for the playful chatter of her crewmate, veteran astronaut Matt Kowalski (George Clooney), who’s commanding his last mission.

During a spacewalk in which Stone is fixing a damaged control panel on their ship, mission control in Houston sends word that unexpected space debris from a blown-up Russian satellite is heading their way at a rapid pace.  Before Kowalski and Stone can escape it, they’re bombarded by shards and chunks of metal that cut their tether to the ship, while also killing the rest of their crew.

From then on, the mission becomes survival when Kowalski and Stone try to get to the international space station in the hopes they can find a space nodule that will return them home.

A Story In Which the Tension Rarely Lets Up

Cinematically and storywise, “Gravity” is a harrowing tour de force in which Murphy’s Law repeatedly produces the worst possible circumstances.  I wasn’t sure that tension could be sustained in a film with just two main characters floating around space, but director Alfonso Cuaron – who also co-wrote the script with his son Jonas – accomplished the impossible in both his visuals and the action movie-like intensity that doesn’t let up until the very end.  Cuaron alternately makes you feel overwhelmed by the vast infinity of space, where there is no air and no solid ground – and claustrophobic within the confines of life-saving space suits and ships.

And what’s even more impressive is that he does it in 90 minutes.  It was such a pleasure seeing a film that wasn’t bloated beyond necessity.  “Gravity” tells you a compelling story without extra fluff.  Everything on-screen is important.

More Than a Spacewalk

Beyond that, there’s much more to the film as well.  Though it’s not artsy-fartsy by any means, the space Stone must travel to find safety is also a metaphor for the mental and emotional journey she’s on in order to rediscover the will to live.  The silence she wanted in the beginning becomes a curse when her communication with Kowalksi suffers a temporary interruption.  And her connection to earth is also destroyed when they can no longer hear orders and updates from Houston.

When Stone and Kowalski do reconnect, he keeps talking to mission control, and Stone doesn’t understand why.  He tells her that the two of them may not be able to hear what’s happening on earth, but it’s possible that Houston can hear them.  No response doesn’t mean you’re not being heard, so it’s always best to keep communicating just in case.  In a movie with a few spiritual overtones, that struck me as important, be it intentional or not.  There are times when we feel like God doesn’t hear our prayers, but a silent response doesn’t mean we should stop praying.  We have to continue under the possibility that we are being heard.

From a faith perspective, the film resonates in other ways too.  For instance, Stone’s quest for survival is driven more by instinct at first.  But there’s one shot in the movie in which she makes it into a ship, then the camera shows her floating, as if in a fetal position in the womb.  It’s a physical representation of the possibility of her being born again – not in the traditional Christian context, but in terms of opening herself up to life again.

It would be impossible for Stone to be born again like Jesus talks about because she has no faith background.  There’s a touching scene in which she’s faced with her own death, and wonders if anyone will pray for her soul when she’s gone.  She says she’d pray for herself, but she was never taught how.  Is there someone looking out for her now?  A picture prayer card that looked to me like St. Christopher carrying the baby Jesus on his shoulder makes a brief cameo at one point, so there’s definitely a suggestion that there’s more to life and the universe than the material things we see around us.

The movie’s spiritual themes, however, are worked in seamlessly.  They never overpower, but rather they’re there for those who choose to see them.

As Stone, Sandra Bullock draws on emotional depths that force her to be vulnerable, angry, broken, and determined. She deserves the early Oscar buzz she’s getting. George Clooney as Kowalski is great as well, though he’s basically playing George Clooney in space – the suave, strong, charming, compassionate guy that you can’t help but root for.

Ultimately, “Gravity” is a heart-pounding thrill ride grounded in real, raw emotion. It also provides a deeper look at the difficult journey from the darkness of grief to the light of hope. The success of that journey is never guaranteed, just like Stone’s return to earth is never guaranteed. But the ‘will she or won’t she’ will definitely keep you watching – and thinking. 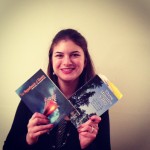 October 9, 2013 From History and Oppression to Body Image Issues: Author Melissa Kuch on the Themes in Her Novel
Recent Comments
0 | Leave a Comment
Browse Our Archives
get the latest from
Catholic
Sign up for our newsletter
POPULAR AT PATHEOS Catholic
1

How White Men Lost the Meaning...
suspended in her jar
Related posts from Christopher Closeup

License to Kill - Bob Dylan on David...
Lyrics follow Man thinks ’cause he rules the earth he can do...
view all Catholic blogs
What Are Your Thoughts?leave a comment
Copyright 2008-2020, Patheos. All rights reserved.