Politics, Media, & Even Some Aquinas: A Review of the “Madam Secretary” Pilot 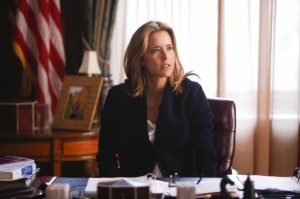 Not only was the premiere of the CBS series “Madam Secretary” an entertaining introduction to what could be an insightful character study and exploration of Washington’s political establishment, it gave more air time to Thomas Aquinas than the “Summa Theologica” author has likely had since Fulton Sheen wrote notes on a chalkboard every week.

Created by veteran writer/producer Barbara Hall (who won a Christopher Award for her series “Joan of Arcadia”), “Madam Secretary” revolves around former CIA analyst Elizabeth McCord (Tèa Leoni) who gets drafted to be the U.S. Secretary of State after the former one is killed in a plane crash. The recently-elected president, Conrad Dalton (Keith Carradine), who is an old friend of Elizabeth’s, says he values her strong ethics and apolitical leanings which allow her to think outside the box.

However, Elizabeth’s resistance to political theater and frustration with Washington’s way of doing things creates tension with her colleagues and underlings as she begins her job. As the story progresses, all the characters discover that they can actually learn from each other and may be able to find a productive balance between standard operating procedure and innovative ways to move forward.

The pilot’s primary conflict centered on two American teens, with an oversimplified view of the world, who traveled to Syria to be freedom fighters of sorts, promptly getting themselves arrested and sentenced to death for being American spies. Elizabeth tries to keep the story from hitting the press so she can use CIA back channels to get them out before they’re killed. But the president’s chief of staff Russell Jackson (Zeljko Ivanek) has his own ideas of how to solve the problem (amusingly dubbed “Operation Stupid Kids”), leaving Elizabeth initially feeling impotent in her new role.

Though that plotline is resolved rather simply, it did result in one of my favorite sequences from the pilot, which takes a well-deserved shot at the media’s obsession with the superficial.

When Elizabeth discovers that a story about the Americans in Syria may become front-page news, she realizes that her secret plans will be put in jeopardy. How, she wonders, can she give the press a bigger story to cover so they’ll be distracted from that one? She then realizes that she holds the solution in her hands.

The entire time that Elizabeth has been serving as Secretary of State, her handlers have encouraged her to take the advice of a stylist to improve her professional-looking-but-ho-hum image. She repeatedly resists these attempts because she’s not one to be overly invested in her looks. Her lack of fashion sense has even become its own story in the press. So what better way to give them a big story than to undergo a makeover? Elizabeth’s new hairstyle and fashionable clothes leave reporters fawning all over her, making every newscast and paper literally choose style over substance.

A Strong Marriage, A Respect for Religion

Though “Madam Secretary” is populated with a talented supporting cast (including “Frasier” veteran Bebe Neuwirth), the series rests on the shoulders of Tèa Leoni, who brings a confident, no-nonsense dynamism to her Secretary of State job – and a vulnerable, everywoman quality to the wife-and-mother-of-two-teens side of her life.

Outside of the Washingtonian intrigue, the show’s strongest feature is Elizabeth’s strong and happy marriage to her husband Henry (Tim Daly), a religion professor at Georgetown. Daly and Leoni bring an easygoing chemistry to their on-screen relationship, making their quippy banter and serious conversations completely believable. Theirs appears to be a marriage of equals between spouses who understand what it means to love and support each other.

Daly’s character is also the one to bring Thomas Aquinas into the conversation. When we first meet him, he’s concluding a lecture to his college class. He says, “What Aquinas was trying to say in ‘Summa Theologica’ is that existence and essence are separate things, right? That’s the whole notion behind Catholic transubstantiation. Now, Luther, though, departed from him in significant ways.”

Time runs out so the lesson ends there, but Aquinas comes up again in a later scene between Henry and Elizabeth in which he’s trying to offer her advice about how to approach a problem. He says, “Thomas Aquinas said that if the highest aim of a captain were to preserve his ship, he would leave it in port forever. Aquinas also said, ‘Sorrow can be alleviated by a good sleep, a bath, and a glass of wine.'”

While neither scene offers a deep theological treatise (though when’s the last time transubstantiation got a network TV shout out), the brief references demonstrate that this is a show with an undercurrent of genuine religious knowledge and understanding. That stems from the fact that show creator Barbara Hall, who also wrote this episode, is a convert to Catholicism and an intelligent woman willing to explore issues of faith seriously. That doesn’t mean “Madam Secretary” will be a platform for preaching or evangelizing any particular faith. It does, however, suggest that the presence of religious elements in world affairs – whatever religions they might involve – will get fair and just treatment in the story. That’s more than can be said for a lot of other primetime television fare.

If “Madam Secretary” has one weak spot, I’d say it’s the show’s Sunday night, post-football time slot. Last night, for instance, the cable guide showed it was scheduled to start at 8:30. But because the game ran long, the show didn’t actually begin until 9:04pm. If viewers had set their DVRs, they would have missed the entire second half of the episode. If DVRing shows is your chosen viewing route, always add at least another hour to your end time. The episode can also be viewed online.

Complexities in the Modern World

The pilot of “Madam Secretary” suggested that this will be a smart show, willing to explore the complexities of diplomacy in the modern world, along with the personalities and beliefs of people in positions of power. In its own way, it reflected another quote by Thomas Aquinas: “Better to illuminate than merely to shine, to deliver to others contemplated truths than merely to contemplate.”

Elizabeth McCord strikes me as a character more inclined to illuminate than shine. I wish her well on her journey.

The Holy Wisdom of America’s Turkey Policy
The Hagia Sophia is back in the news—this time because Turkey’s Supreme...
view all Catholic blogs
What Are Your Thoughts?leave a comment
Copyright 2008-2020, Patheos. All rights reserved.