Why Pope Francis’s Speech to Congress Wasn’t As Liberal As You’ve Been Told September 25, 2015 Tony Rossi

There was a lot of hand-wringing by conservatives on social media yesterday because they feel Pope Francis delivered a speech to Congress that sided more with Democratic issues than Republican ones. Democrats, on the other hand, were crowing that the Pope is on their side.

In reality, the despair of conservatives and jubilation of liberals is both unseemly and kind of wrong because the Pope included plenty of conservative – or at least neutral – ideas that both sides of the aisle can pursue.

Consider this early statement from his speech:

“A political society endures when it seeks, as a vocation, to satisfy common needs by stimulating the growth of all its members, especially those in situations of greater vulnerability or risk.”

Note, Pope Francis doesn’t say the government has to give those in poverty a handout and take care of them financially for the rest of their lives. He said the government’s job is “stimulating…growth” for its citizens. In essence, it’s about teaching a man to fish and feeding him for a lifetime.

Later on in his speech, Pope Francis made another pro-business statement quoting his own encyclical:

“It goes without saying that part of this great effort is the creation and distribution of wealth…’Business is a noble vocation, directed to producing wealth and improving the world. It can be a fruitful source of prosperity for the area in which it operates, especially if it sees the creation of jobs as an essential part of its service to the common good.’”

The Pope has had to answer charges that he is anti-capitalism, but what his words show is that he’s really anti-greed. Both capitalists and communists can be greedy. The Pope is simply reminding business owners that wealth comes with a responsibility to help others. There are many wealthy people that already do this, but it’s always good to get a reminder. After all, this isn’t a “liberal” principle, but a Christian one. If I were a Republican candidate talking to a Catholic audience, I would use these pro-business statements as talking points.

Pope Francis then gave us another important reminder:

“The figure of Moses leads us directly to God and thus to the transcendent dignity of the human being. Moses provides us with a good synthesis of your work: you are asked to protect, by means of the law, the image and likeness fashioned by God on every human face.”

In an age of materialism and secularism and relativism, Pope Francis is reminding Congress and the American people that there is such a thing as “the transcendent dignity of the human being,” all of whom are made in the image and likeness of God. That means human beings need to look beyond political labels – and any labels at all. The poor who have fallen on hard times, the unborn child in the womb, and the elderly disabled whose physical condition may leave them confined to a bed equally possess that same transcendent dignity.

In fact, soon after this statement, Pope Francis said:

“I would also like to enter into dialogue with the many elderly persons who are a storehouse of wisdom forged by experience, and who seek in many ways, especially through volunteer work, to share their stories and their insights. I know that many of them are retired, but still active; they keep working to build up this land.”

The elderly are often the victims of our youth-obsessed, throwaway culture, so this was a remarkable pro-life statement. The Pope is saying that senior citizens shouldn’t just be dumped in a nursing home and ignored. The talents and wisdom they’ve accumulated from decades of life and work are valuable. And if they get sick, they shouldn’t simply be considered fodder for euthanasia. Seniors remain an asset to society, they possess an innate dignity, and they should be treated as such. It should be noted that this statement was made by a 78-year-old man with one lung and sciatica whose stamina and spirit are a marvel. It must be a matter of the Holy Spirit, I suppose.

For Republicans who support pro-life legislation, this is another boon to their argument, along with the Pope’s later statement:

“The Golden Rule also reminds us of our responsibility to protect and defend human life at every stage of its development.”

Some were upset that the Pope then went on to support abolishment of the death penalty instead of abortion. Granted, it might have been a missed opportunity to work in at least a mention of the unborn. But at the same time, Catholic opposition to abortion isn’t exactly a secret.

Just a few weeks ago on the ABC News special hosted by David Muir, Pope Francis enthusiastically praised a single mother in the audience for not killing the children in her womb and choosing life for them instead. And he used that terminology! When is the last time abortion was addressed like that on prime time network television? And the woman’s two daughters were standing next to her, giving even more weight to the beauty of her choice! Just because the Pope didn’t specifically use certain words in his speech to Congress isn’t reason to question his pro-life credentials.

Perhaps he thought the Church’s stand on abortion is already well-known, so he decided to draw more attention to the death penalty and to the plight of the elderly, two topics that don’t usually generate much attention. Again, these are Catholic Christian principles that should transcend politics, but Republican candidates who cite the importance of their faith can find guidance in the Pope’s words.

Along those same lines, Pope Francis also made the following statement:

“We need to avoid a common temptation nowadays: to discard whatever proves troublesome.”

Though he said that in regard to the world’s treatment of refugees, it applies to the above (and many other) situations as well. But let’s look at the Pope’s comments on immigrants and refugees. Some people are interpreting them as saying the U.S. should have open borders and let everyone into our country. But he said nothing of the sort. Here are his actual quotes:

“We must resolve now to live as nobly and as justly as possible, as we educate new generations not to turn their back on our “neighbors” and everything around us. Building a nation calls us to recognize that we must constantly relate to others, rejecting a mindset of hostility in order to adopt one of reciprocal subsidiarity, in a constant effort to do our best. I am confident that we can do this.

“Our world is facing a refugee crisis of a magnitude not seen since the Second World War. This presents us with great challenges and many hard decisions. On this continent, too, thousands of persons are led to travel north in search of a better life for themselves and for their loved ones, in search of greater opportunities. Is this not what we want for our own children? We must not be taken aback by their numbers, but rather view them as persons, seeing their faces and listening to their stories, trying to respond as best we can to their situation. To respond in a way which is always humane, just and fraternal. We need to avoid a common temptation nowadays: to discard whatever proves troublesome. Let us remember the Golden Rule: “Do unto others as you would have them do unto you” (Mt 7:12).”

Note, the Pope doesn’t offer any specific solutions to the situations surrounding immigrants and refugees. He asks Congress to deal with them “as nobly and as justly as possible” and by “trying to respond as best we can to their situation.” Beyond that, he’s simply encouraging members of Congress to talk to each other and do something. Build bridges and come up with solutions to these problems. In addition, he reminded us that we need to look at all the people involved as persons created in the image of God, not as labels.

If Republicans have any hopes of winning the White House, they would be wise to take that advice to heart so they’re not seen as anti-immigrant in general. Even conservative commentator Charles Krauthammer wrote in a column this morning, “Muslims, Hispanics, women. What next? Who’s left [for the GOP candidates to insult]?”

The trick, as Pope Francis repeatedly pointed out, is to treat everyone humanely. Solutions require “dialogue,” compromise, hard work and sacrifice. Those aren’t liberal or conservative ideals. They’re American ideals. And it was good to get a reminder of them from the world’s greatest religious leader.

RELATED: Encountering Pope Francis: He’s more than the sum of the parts we like about him. 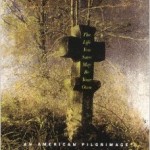 September 24, 2015
Since Dorothy Day & Thomas Merton are Hot Topics Due to Pope Francis...
Next Post 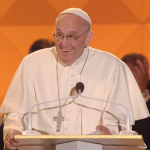 September 28, 2015 Four New Nicknames for Pope Francis in the Aftermath of His U.S. Visit
Recent Comments
0 | Leave a Comment
"What was the name of the gentleman you were speaking to on CHristopher Closeup Sunday ..."
Katie Raggio Hossley Jimmy Kimmel Deserves an Emmy For ..."
"What a great article! Always loved the chracter and how it was developed from the ..."
Rick Malloy, S.J. The Catholic Church (and the Jesuits) ..."
"I loved the show and Father Francis John Patrick Mulcahy S.J played by the actor ..."
Fr.Ed Wade,CC The Catholic Church (and the Jesuits) ..."
"What a great tribute to a fine actor. As a Catholic I was never more ..."
RajunCajun The Catholic Church (and the Jesuits) ..."
Browse Our Archives
get the latest from
Catholic
Sign up for our newsletter
POPULAR AT PATHEOS Catholic
1