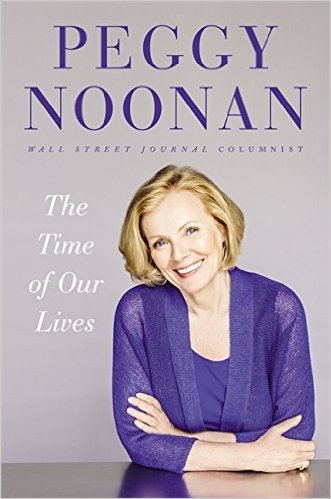 This is part 2 of my interview with Peggy Noonan. To read part 1, click here.

One of the recurring themes in Peggy Noonan’s book “The Time of Our Lives” is what she calls “old America,” the America in which she was raised with a sense of safety and hope for the future.

During our “Christopher Closeup” interview, she recalled the era as one in which parents who were overwhelmed with jobs and housework could say to their kids, “Go out and play. Maybe come back for lunch, maybe come back for dinner. As a child, you were free to explore the neighborhood. What parents were saying essentially is, ‘Go out and play in America. America is a safe place.'”

Many people today no longer feel that safety for a variety of reasons. Noonan believes one part of it involves the state of American popular culture. In “The Time of Our Lives,” she recalls her own TV viewing as a child: “I’d put the TV on low and watch it for hours – network dramas, old movies, Jack Paar. It was all jolly or thoughtful or hopeful, representative of future life, adult life. It was comforting.”

It’s a different story today. Noonan told me, “If you had an imperfect or difficult or challenging childhood in the old America, there were a number of things that could save you and preserve your optimism and make you hungry for life. One of them was American culture, [which] itself served as a protective force: American TV, radio, movies…I think the stories we tell now are simply darker. There’s more violence, there’s more anomie, there’s more of a nihilistic feel…I think we forget – [if] you’re a young 28-year-old writer of a great television series, you may be out of touch with the idea that the images that five year olds and 10 year olds see in TV and movies can frighten them and lodge in their heads. And if they’re already coming from a difficult place, perhaps a difficult family, it’s not really good for them to be frightened continually by their culture.”

The polarization and division in modern American culture is another problem, says Noonan. During her book tour, she’s been traveling around the country doing signings and appearances that include audience Q&A. Wherever she goes, people are saddened by polarization and wonder how we can get past it.

Unfortunately, Noonan doesn’t see an easy road. She noted that landslide elections, like Reagan won in 1980 and 1984, would make a statement that “the nation has spoken. Go forward.” But we’re not living in a landslide age: “We have a two-term president now who won by only a few points. George W. Bush won the presidency in 2000 while losing the popular vote. We’re going through what has been called The Big Sort. Americans now increasingly move closer to other Americans who see things more or less their way. That didn’t used to be. We also have divided media. We have so many outlets in which we can find people who agree with us on things and stay in that lane. We’ve lost a number of the things that kept us together.”

One career that can impact the future of America is journalism. It’s the field in which Noonan learned her craft at CBS News in the 1970s and realized that the words and messages she puts out into the world can make a difference in people’s lives.

For aspiring reporters, she offers one fundamental piece of advice: “Look at the life and work of Tim Russert and move on from there. Tim had very strong political feelings. He was a former Democratic operative, a liberal Democrat, worked for Mario Cuomo, worked also for a while for Pat Moynihan. He went into journalism because he loved politics, understood politics, understood what his side felt, thought, was committed to. [But he also] bothered to understand what the other side felt, thought and was committed to. He found it possible to be fair to everyone. He thought journalism was asking everyone their views, their positions, their reasons. He thought he could honestly grill everyone equally. So he was fair. You don’t have to be without opinions to be fair. You have to be committed to fairness to be fair. That’s all.”

Noonan writes movingly of Russert in “The Time of Our Lives,” as well as many other people, places and things. Ultimately, it’s a book that celebrates heroism, history, humility, virtue, faith, and the wisdom of the common man. And by highlighting the best of what America was, Noonan reminds us that we can connect with the better angels of our nature once again.

To read part 1 of my interview with Peggy Noonan, click here.

(To listen to my full interview with Peggy Noonan, click on the podcast link): 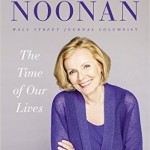 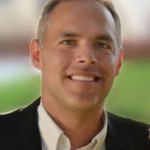