Is NBC’s Afterlife Comedy “The Good Place” Heavenly Fun or a Devilish Dud?

Patheos Explore the world's faith through different perspectives on religion and spirituality! Patheos has the views of the prevalent religions and spiritualities of the world.
(This review was based on a screener which was missing some special effects shots and a few scenes.)

“Welcome. Everything is fine.”

Most of us would likely be happy to be greeted by that message when we enter the afterlife. Eleanor Shellstrop sure is. But as time goes by, it turns out things are not so fine after all. The reason: she discovers that she is not the orphan-rescuing, death row lawyer Eleanor Shellstrop that is supposed to be in “The Good Place.” Instead, this Eleanor is a booze-swilling narcissist with no friends and a complete disregard for other people’s feelings. So what’s an already dead girl to do?

That’s the question at the heart of the new NBC sitcom “The Good Place,” starring Kristen Bell as Eleanor; Ted Danson as Michael, the architect of this heaven-like community; and William Jackson Harper as Chidi, Eleanor’s Nigerian soulmate.

At first, Eleanor thinks she can scam the system and just remain in The Good Place under false pretenses. But her presence causes havoc akin to the plagues that fell on Egypt in the book of Exodus (if the book of Exodus was a comedy).

Chidi, it turns out, was a professor of ethics and moral philosophy who thinks he can help Eleanor earn her eternal reward by teaching her to choose the common good over personal pleasure.

He even brings up Aristotle’s belief that moral virtue can be acquired through practice. (When’s the last time you heard the words “Aristotle” and “virtue” on network television?)

Meeting a guy who donated both his kidneys to people in need makes Eleanor doubt she could ever measure up. But by the end of the second episode, the tried-and-true method of guilt gets her to start taking baby steps in the right direction.

Right off the bat, “The Good Place” establishes that its view of the afterlife will not be completely theologically consistent with any of the major religions. Michael explains that “every religion guessed about five percent” of what it is actually like. He also says, “It’s not the heaven or hell idea that you were raised on. But generally speaking, in the afterlife, there’s a good place and there’s a bad place. You’re in The Good Place.”

When Eleanor later asks what the bad place is like, someone plays an audio clip for her of horrific screaming and wailing. I wouldn’t be surprised if there was also grinding of teeth.

Also, most of the residents of the good place reside in mansions, which does hearken back to what certain Bible translations describe as the living situation there.

So in some ways, this afterlife is fairly traditional. Emphasis, however, is put on good actions and the golden rule as opposed to expressions of faith. In a pluralistic society such as ours, there’s nothing wrong with this approach in a TV show meant to appeal to as many people as possible. And as it says in the Book of James, “Faith without works is dead.”

“The Good Place” does seem to have a strong moral foundation. Inherent in its worldview is the idea that our actions in this world matter on a higher level, a supernatural level that will effect us eternally. It’s not good enough to just coast by in life, doing the bare minimum not to harm anyone – though that’s the way Eleanor wishes it were.

She says, “This system sucks! What, one in a million gets to live in paradise and everyone else is tortured for eternity? Come on! I wasn’t freakin’ Gandhi, but I was okay. I was a medium person. I should get to spend eternity in a medium place. Like Cincinnati. Everybody who wasn’t perfect but wasn’t terrible should get to spend eternity in Cincinnati.” (Baby, if you’ve ever wondered…)

None of the moral questions would matter, though, if the comedy didn’t work. Thankfully, it does, owing in large part to Kristen Bell’s ability to be charmingly irreverent – or maybe it’s irreverently charming – in a place where everyone is seemingly perfect. For instance, when she discovers that cursing is prohibited in the good place, she exclaims, “That’s bullshirt!” (because curse words don’t come out as intended in The Good Place).

Bell also manages to imbue Eleanor with the right balance of comic self-absorption, self-reflection, and redeemability. All those qualities are needed to make the character and the show touch people’s hearts and funny bones – and she pulls it off beautifully.

It’s also fun seeing Ted Danson – who is arguably the most successful TV actor of the last 30+ years – play Michael, who is a warm and welcoming presence in The Good Place, but who also suffers from self-doubt because setting up the neighborhood is his first solo project and things are now going wrong. And William Jackson Harper is great as Chidi, combining confidence and a strong moral core with the inevitable exasperation and fluster that comes from dealing with Eleanor.

So based on the first two episodes, “The Good Place” has the potential to be a heavenly hit that can make us laugh while nudging us toward becoming better people. It premieres Monday Sept. 19 at 10/9C, before moving to its regular time slot on Thursdays at 8:30/7:30C. The series was created by Michael Schur, a producer and writer known for “The Office” and “Parks and Recreation.” 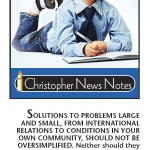 September 13, 2016
Teach Yourself to Think More Clearly
Next Post 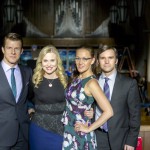 September 20, 2016 "Signed, Sealed, Delivered: Lost Without You" Explores Life, Death & the Divine Delivery Theory
Recent Comments
0 | Leave a Comment
Browse Our Archives
get the latest from
Catholic
Sign up for our newsletter
POPULAR AT PATHEOS Catholic
1