One Mother is Changing the Media’s – and the World’s – Perception of Those with Disabilities October 4, 2016 Tony Rossi 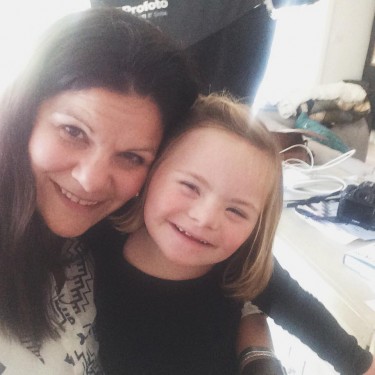 As the mom of six children, including a daughter with Down syndrome, photographer Katie Driscoll noticed that she rarely saw advertisements featuring kids with disabilities. She then co-founded a campaign called “Changing the Face of Beauty.” Its purpose was to encourage advertisers to highlight more individuals with disabilities in their work. That campaign for more diversity has paid off, and more companies are taking up Katie’s challenge.

Katie joined me recently on “Christopher Closeup” to discuss her mission. Here are excerpts from our conversation. The full interview can be heard in the podcast at the end.

Tony Rossi: Before we talk about “Changing the Face of Beauty,” I want to start with Grace, your daughter with Down syndrome who inspired this whole movement in a way. Take me back to the time when you found out that Grace had that extra 21st chromosome. What went through your mind, and did you know anything about Down syndrome at the time?

Katie Driscoll: At the moment that I received the news after my ultrasound, that there was a high probability that this child would be born with an extra chromosome, the first image that popped in my mind was Chris Burke from “Life Goes On” and Lauren Potter from “Glee.” I didn’t realize at the time how powerful that moment was. I had no experience with anyone that had Down syndrome, so my mind just immediately went to that media image.

TR: A few years ago, I interviewed an author named Amy Julia Becker. She wrote a book about having a daughter with Down syndrome and it was called “A Good and Perfect Gift,” because that’s how she came to see her daughter after the initial feelings of fear. How has Grace become a gift to you and your family – not necessarily in spite of her Down syndrome, but maybe even because of it?

Katie Driscoll: Our lives are completely different because of Grace and I guess that’s why I love her name so much, because she did give us grace. She made us different people. When I was carrying her, I had zero exposure to the disability community, aside from maybe seeing people in public. To say there was fear would be an understatement. I was absolutely fearful of differences because I had no exposure.

When I found out my daughter had Down syndrome, as a typical mother would do, I just dug in and I was like, “Wow. This is going to be different for my daughter, and I’m going to make sure that this doesn’t hold her back and that I’m going to have the same expectations for her as I have for my other children.” I don’t think I’ve wavered from that. That’s really why “Changing the Face of Beauty” exists…When you do have those obstacles, you try to figure out ways to compensate for the deficiencies that come along with disability. Over the years we know more, so we do more. Here we are working so hard to enable our daughter to have an independent and good life. I want to make sure that there’s opportunity for her to reach for, when she’s ready to reach. We’re a more compassionate family unit, definitely. We are aware of the people surrounding us. And the blessings, I couldn’t even begin to name them off.

TR: One of the founding principles of The Christophers was that people should stop, simply, complaining about what’s wrong with the world but rather take the initiative to make it better. And that’s really what you’ve done with the “Changing the Face of Beauty” movement. How did you get the idea to start it, and how did you get it off the ground?

Katie Driscoll: After having 5 boys, when I [knew I was] having a daughter, I was looking at catalogs and I was shopping, obviously. In that process, I became aware of the lack of representation. I started a blog and picked up my camera and documented our life because I wanted to make sure that people around me knew that we loved our daughter, regardless of her disability, and that we wanted the same things for her as we did for our [other] children. There was definitely an evolution of “Changing the Face of Beauty” from where it was and where it is today. Initially, people started responding and telling me that I had a gift of capturing Grace and other people with disability in a very natural, positive way, and they felt like I should take that and share it outside of our community.

That’s where “Changing the Face of Beauty” was born – from a conversation with Steve English and myself. He also had an adult son with a disability, and we talked about the lack of exposure of our kids and how that probably inhibits a lot of opportunity. From there we started a social media movement which evolved into the point where I had press asking me, “Who have you influenced? What have you done thus far?” I hadn’t influenced anyone, really. I knew that I had to put my neck out there and ask for people to raise their hand and change.

We launched that in 2015. I asked retailers to raise their hand and commit to including at least one model with a disability in 2015. By the end of the year, we had over 125 companies that raised their hand and said, “Yes,” and completed the task at hand. There were no legal documents to sign. We were just a campaign. Most of them reported back that it really wasn’t that big of a deal, and it was absolutely something they would continue to do. They were sorry that they had never even thought about the disability community before.

At that point, we knew that we were influencing change. I applied for non-profit status and “Changing the Face of Beauty” non-profit was born. Now we have partners that are financially and business-wise invested in that change.

Katie Driscoll: When I started this campaign, I had parents come up to me and say, “Thank you…I never even expected to see my family or my child represented.” For adults, it’s something that they’ve struggled with their entire lives. I think what happens a lot of times within the disability community is we work so hard to advocate for our individual differences. What really makes us powerful as a group is that we are the largest minority in the world…”Changing the Face of Beauty” is that umbrella that says, “We don’t care what your difference is. We advocate for differences, in general, to be seen.” It’s something that everyone can rally around and support.

TR: How has your definition of beauty changed in the last five years, from when you started doing this to now?

Katie Driscoll: When I was pregnant with my daughter and I had my five boys already, I felt like I was the picture of the typical American family. I think that that was a pretty shallow way to look at our family. For me, it has opened my eyes that the possibilities are endless and that there is beauty in all people and to embrace what makes you unique and different. That’s not something that I was confident enough to do before my daughter – and definitely before “Changing the Face of Beauty.” The gifts that I’ve received from being a part of this organization are limitless.

TR: You mentioned before how Grace is an appropriate name for your daughter. I know “Changing the Face of Beauty” is open to all people regardless, but for you personally, is there a spiritual dimension to your work on this?

Katie Driscoll: Not for the organization, but for me personally, yes. People will say things, comforting things, when you’re in a situation where your life takes a turn that you didn’t necessarily expect, but I truly believe that God has a plan for all of us. This was my plan, and He guided us through it. Again, I’m forever grateful that he chose our family to receive such a gift.

TR: If anybody listening wants to help change the face of beauty in our culture, what steps would you advise they take?

Katie Driscoll: Obviously, you can visit our website. But we are currently in the process of traveling across the United States and a little bit around the globe with pop-up organized photo shoots where we give aspiring models with disabilities the opportunity to come together and get quality headshots to be able to influence the talent industry. Part of “Changing the Face of Beauty” is having talent available to ad agencies and corporations that are looking to integrate. Unfortunately, the talent agencies right now are not accepting of differences.

Hosting headshot clinics in your area is one way. We are developing a stock imagery database right now that will hold positive depictions of – and natural depictions of – people living with disabilities for organizations and companies to be able to use that stock imagery in their advertising campaigns. Right now, if you were to go to stock imagery databases and [search] the word “disability,” you would be very disappointed in the depiction. We hope to change that, and we believe that’s the fastest way of getting more disability represented in the general media.

Then, there’s word of mouth, contacts. If you have contacts in the industry that you feel could be influenced, we want to know that and we definitely want to reach out to them.

TR: At the Christophers we use the motto, “It’s better to light one candle than to curse the darkness.” In your life, when you hit times of darkness, how are you able to light that metaphorical candle and move forward toward a brighter future?

Katie Driscoll: As it pertains to “Changing the Face of Beauty,” it motivates me when I am discouraged. It motivates me to continue to push forward because I believe passionately that the media can change the world – and it influences everything we do. Instead of complaining about what’s not available to our family or to my daughter, I want to make those changes to ensure that they are available. I continue to keep my eye on the future. I figure I have 16 years before she’s out there asking to interview for jobs. [I want to give] our world exposure to people like Grace, or people with other disabilities, so the way that she looks doesn’t deter [her] opportunities.

(To listen to my interview with Katie Driscoll, click on the podcast link): 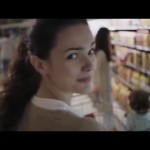 September 29, 2016
Insurance Commercial Highlights Choosing Adoption in the Face of Infertility
Next Post 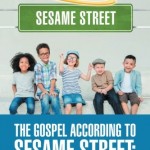 October 5, 2016 Educational TV, Beer Commercials, and 'The Gospel According to Sesame Street'
Recent Comments
0 | Leave a Comment
Browse Our Archives
get the latest from
Catholic
Sign up for our newsletter
POPULAR AT PATHEOS Catholic
1