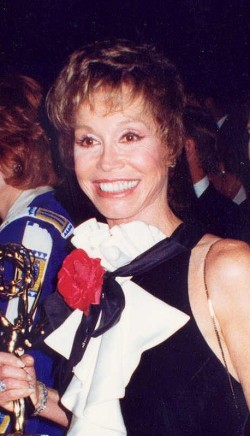 Actress Mary Tyler Moore, who could “turn the world on with her smile” (as her TV series’ theme song stated), died today at age 80. There are plenty of wonderful obituaries about her life out there, so I’d like to focus on something a little different: the times her work made us laugh from a Catholic perspective.

Yes, there was a time in the 60s and 70s when TV series could have fun with Catholic priest characters without making fun of them. Both of Moore’s sitcoms included episodes that fell squarely into that camp.

First, there was “The Dick Van Dyke Show,” in which Mary played Laura Petrie, the wife of comedy writer Rob Petrie (Van Dyke). In the season three episode “The Life and Love of Joe Coogan,” Rob runs into Coogan, one of Laura’s old flames, at the golf course and he gets jealous because he didn’t know about their relationship years ago. In fact, Joe used to write love sonnets to Laura.

What Rob – and Laura – don’t know is that Joe Coogan is now a priest. He doesn’t wear his collar while playing golf because some people find it intimidating.

Laura goes to the golf course to “accidentally” run into Joe, where she is startled to see him dressed as a priest. They briefly catch up and she invites him over for a fish dinner (since it’s Friday).

When she tells Rob that Joe is coming over (but not that he’s a priest), he gets even more jealous and invites his co-writer Sally (Rose Marie) over to be Joe’s date for the evening. And yes, hilarity ensues. Watch it here:

Years later, on Moore’s self-titled sitcom “The Mary Tyler Moore Show,” there was a season six episode entitled “Mary’s Father,” in which Mary is producing a documentary that involves the work of a local priest, Father Terrence Brian (Ed Flanders).

Over lunch, Father Brian mentions to Mary that a fellow priest recently left the priesthood for a woman. He then explains that he’s having doubts about the ministry himself.

This scares Mary into thinking Father Brian has fallen in love with her. She reveals her fears to Mr. Grant (Ed Asner) and Murray (Gavin McLeod), who approach the priest in their own inartful ways about staying in the Church.

In the end, all is not quite what it seems, but plenty of laughs are had along the way. You can watch the episode here:

In this world of troubles, it’s a great gift to be able to make other people smile and laugh. The work of Mary Tyler Moore did just that, and will continue to be her legacy for years to come.

Eternal Rest grant unto her, O Lord, and let perpetual light shine upon her. May she rest in peace. Amen.

January 17, 2017
'We're All Sick Pilgrims Drifting Toward God, Whether We Realize It or Not'
Next Post

February 13, 2017 Discerning God's Will & Adopting Potatoes in "Signed, Sealed, Delivered: Higher Ground"
Recent Comments
0 | Leave a Comment
"What was the name of the gentleman you were speaking to on CHristopher Closeup Sunday ..."
Katie Raggio Hossley Jimmy Kimmel Deserves an Emmy For ..."
"What a great article! Always loved the chracter and how it was developed from the ..."
Rick Malloy, S.J. The Catholic Church (and the Jesuits) ..."
"I loved the show and Father Francis John Patrick Mulcahy S.J played by the actor ..."
Fr.Ed Wade,CC The Catholic Church (and the Jesuits) ..."
"What a great tribute to a fine actor. As a Catholic I was never more ..."
RajunCajun The Catholic Church (and the Jesuits) ..."
Browse Our Archives
Related posts from Christopher Closeup