Why men have stopped singing in church

It happened again yesterday. I was attending one of those hip, contemporary churches — and almost no one sang. Worshippers stood obediently as the band rocked out, the smoke machine belched and lights flashed. Lyrics were projected on the screen, but almost no one sang them. A few women were trying, but I saw only one male (other than the worship leader) making the attempt.

A few months ago I blogged, “Have Christians Stopped Singing?” I did some research, and learned that congregational singing has ebbed and flowed over the centuries. It reached a high tide when I was a young man – but that tide may be going out again. And that could be bad news for men.

Before the Reformation, laypersons were not allowed to sing in church. They were expected to stand mute as sacred music was performed by professionals (priests and cantors), played on complex instruments (pipe organs), and sung in an obscure language (Latin).

Reformers gave worship back to the people in the form of congregational singing. They composed simple tunes that were easy to sing, and mated them with theologically rich lyrics. Since most people were illiterate in the 16th century, singing became an effective form of catechism. Congregants learned about God as they sang about God.

A technological advance – the printing press – led to an explosion of congregational singing. The first hymnal was printed in 1532, and soon a few dozen hymns became standards across Christendom. Hymnals slowly grew over the next four centuries. By the mid 20th century every Protestant church had a hymnal of about 1000 songs, 250 of which were regularly sung. In the church of my youth, everyone picked up a hymnal and sang every verse of every song.

About 20 years ago a new technological advance – the computer controlled projection screen – entered America’s sanctuaries. Suddenly churches could project song lyrics for all to see. Hymnals became obsolete. No longer were Christians limited to 1,000 songs handed down by our elders.

At first, churches simply projected the songs everyone knew – hymns and a few simple praise songs that had come out of the Jesus Movement. People sang robustly.

But that began to change about ten years ago. Worship leaders realized they could project anything on that screen. So they brought in new songs each week. They drew from the radio, the Internet, and Worship conferences. Some began composing their own songs, performing them during worship, and selling them on CD after church.

Years ago, worship leaders used to prepare their flocks when introducing a new song. “We’re going to do a new song for you now,” they would say. “We’ll go through it twice, and then we invite you to join in.”

That kind of coaching is rare today. Songs get switched out so frequently that it’s impossible to learn them. People can’t sing songs they’ve never heard. And with no musical notes to follow, how is a person supposed to pick up the tune?

And so the church has returned to the 14th century. Worshippers stand mute as professional-caliber musicians play complex instruments, sung in an obscure language. Martin Luther is turning over in his grave.

What does this mean for men? On the positive side, men no longer feel pressure to sing in church. Men who are poor readers or poor singers no longer have to fumble through hymnals, sing archaic lyrics or read a musical staff.

But the negatives are huge. Men are doers, and singing was one of the things we used to do together in church. It was a chance to participate. Now, with congregational singing going away, and communion no longer a weekly ordinance, there’s only one avenue left for men to participate in the service – the offering. Is this really the message we want to send to men? Sit there, be quiet, and enjoy the show. And don’t forget to give us money.

There’s nothing wrong with professionalism and quality in church music. The problem isn’t the rock band, or the lights, or the smoke machine. The key is familiarity. People enjoy singing songs they know.

How do I know? When that super-hip band performed a hymn, the crowd responded with gusto. People sang. Even the men. 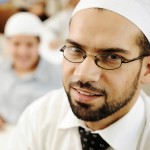 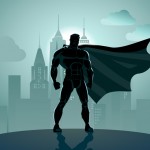 May 15, 2013 Men, superheroes and church
Recent Comments
527 Comments | Leave a Comment
Browse Our Archives
Related posts from Church for Men