Why seeker-friendly churches are losing seekers

Trevor was raised in a traditional church but quit during his early teens. Now that his partying days are over he’s feeling the urge to return. Trevor decides to try a large church that’s supposed to be really great for people his age.

Parking is easy, with friendly men to guide him to an empty spot. A smiling woman hands him a flyer as he enters a darkened, windowless room with two huge screens projecting time-bomb style countdowns. There’s an elevated stage beneath a rock-show style lighting truss. Trevor finds a seat and shares a nod with a slightly older couple down the row.

As the clock strikes zero a young man with a guitar takes the stage. “Welcome to _________church. Let’s all worship,” he says.  As he strums his first note people all over the sparsely populated auditorium begin to stand. So Trevor stands. He’s never heard the song they’re playing.

The crowd remains standing as the band transitions to another song Trevor has never heard.

Trevor looks around. Lyrics appear on the screen, but hardly anybody is singing them. In fact, no man around him is even making the attempt. Instead, the men stare blankly at the stage, hands in pockets, while the band rocks out. The man down the row is checking something on his iPhone.

Then the band plays a third song he’s never heard.

Then a fourth. Still no one sings.

Finally the band stops, except the keyboardist, who plays quietly under the opening prayer, which is delivered by a smiling, muscular man covered in tattoos. The prayer is brief – 20 seconds long, and ends with a handclap and a loud AMEN! The tattooed man invites the congregation to take their seats, introduces himself and welcomes the visitors. After a couple of announcements the band fires up another song. Immediately the crowd begins rising to its feet. So does Trevor — reluctantly.

The band plays two more songs Trevor has never heard. Trevor checks his watch: he’s been here almost 25 minutes and all he’s done is stand in the dark listening as a band plays songs nobody seems to know.

The whole thing feels like a show to him. Like canned entertainment. So he slips out the back door and decides not to come back.

Church growth experts tell us that visitors decide in the first 10 minutes whether or not they will return. Entire books have been written to help churches with their “front door” experience. Consultants emphasize easy parking, friendly greeters and a seamless check-in for kids’ church.

But nobody’s addressing the elephant in the room: the uncomfortable situation we create for visitors by front-loading our worship services with music. Most contemporary churches offer almost nothing of interest to a visitor during the first 30 minutes of the service.

On top of this, we’ve done away with the bulletin and order of worship, so guests have no idea what’s about to happen, or how long the service will go on. We dropped these to create the illusion that the worship service is “organic” or “Spirit-led” (even though most contemporary services are planned down to the minute). Our most ardent worshippers really dig this organic vibe, but we’re achieving it at the expense of our newbies.

Seekers come to church for two reasons: they want to hear a good sermon that relates to their life, and they want to meet friendly people who are like them. Asking them to stand in the dark for half an hour singing songs they don’t know is the opposite of seeker-friendly.

If you want to make your service more welcoming to visitors, I’d offer the following suggestions:

Now, I know what you’re thinking: God desires our worship. Yes he does. But his greater desire is to seek and save the lost. We can worship him in a way that makes visitors feel like guests rather than outsiders. 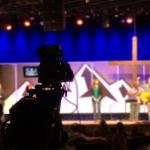