Activism and Virtue-Signalling on Social Media

There is a popular meme that periodically circulates on social media showing a scene in The Lord of the Rings where Aragorn bursts into the throne room of King Théoden shouting, “Gondor calls for aid!” Théoden responds by saying, “My thoughts and prayers are with Gondor. Sending positive vibes!” In the last frame, Théoden’s face is shown with the flag of Gondor as an overlaying filter on his Facebook profile picture. This is meant to poke fun at how many activists on social media tend to express solidarity, concern or outrage in a passive-aggressive manner (such as liking posts or changing their profile picture make themselves appear virtuous). And I’ll be the first to admit that I, myself, am guilty of it.

Activism on social media has been coined by many with the term ‘slacktivism.’ It is commonly viewed as a passive-aggressive form of virtue-signalling in order to guilt or coerce others into subscribing to an opinion or worldview while simultaneously making oneself feel an inflated sense of self-importance. Aside from liking, sharing and commenting on posts which point to a certain cause, it can involve no real or tangible risk to the person doing it.

Whenever a major injustice is announced in the media, it is a perfectly natural and human response to grieve, be outraged and to somehow tangibly contribute to a positive solution. As someone who regularly blogs about cultural, religious and political commentary, it’s easy for me to get caught up in the hype of the latest cause or injustice. If it’s a topic I’m passionate about, it only makes sense for me to express what my beliefs and principles are in my writing and in my social media posts. In many ways, my blog can be a form of activism within itself, especially if one wants to share valuable information that may help people think and consider how they view the world around them. But with that comes with constant self-reflection and a willingness to hear and consider opposing viewpoints even when they make me uncomfortable. Humility is something I think every human struggles with — and I am no exception.

Most people cannot stand virtue-signalling when it comes from others, even the ones who do it frequently. It becomes even more aggravating when those who have remained silent in the past over injustices have suddenly started doing it because it’s suddenly popular and earns them the ‘like’ on Facebook or pat on the back. Standing up to raise your voice because everyone else is doing it isn’t exactly brave unless it involves some kind of risk. On the flip side, just because standing up for a certain cause may suddenly become popular, that does not mean there isn’t social pressure from an activist’s family members or friends that contributes to an injustice. If the end-goal of activism is to initiate positive change for the betterment of the common good, then risking losing relationships would be a sacrifice in itself.

Phrases like, “Silence is violence,” and, “If you are neutral in situations of injustice, you have chosen the side of the oppressor,” are so loosely tossed nowadays that people tend to forget what they truly mean. I also notice this can often be directed towards Christians who frequently default to the ‘thoughts and prayers’ rhetoric without even attempting to put their faith into action (As per James 2:14-25). I think what motivates most people to double down on posting about issues of injustice on social media is the need to bring awareness to those who haven’t been reached out to. It can be like evangelism without the Gospel. I would also daresay some perhaps subconsciously regret not taking a stand in past experiences. This is where I think such activism turns into abusive behavior and becomes a form of projection, and why many people tend to not take activists on social media very seriously — especially if they happen to notice hypocritical behavior such as affirming one injustice as more ‘valid’ than another. But even in light of this, nothing you say or do will ever be good enough for everyone. We are all human and make mistakes, and there will always be someone there to tell you where you fall short.

There is a polar difference between remaining silent when an injustice is happening directly in front of you versus when there is no injustice being committed in the present moment. This is where the issue of microaggressions come in. There certainly are toxic behaviors that collectively add up to exasperate an injustice even further. But it doesn’t mean people who aren’t obsessively talking about it all the time are committing atrocities worthy of public humiliation or being ostracized. This is where I think people need to give grace to each other for those who are at least trying. Justice is necessary. But without grace, there is no forgiveness. And without forgiveness, there is no peace.

It’s easy to contribute to a good cause when we know we’re going to get some kind of reward from it, whether it be money, material benefits, a boost in reputation or simply congratulatory attention. It’s also challenging to not let your left hand know what your right hand does, especially since we live in the online age of GoFundMe and Kickstarter. Most online fundraisers publicly show the list of donors for the sake of transparency, but it can easily become an opportunity for anyone to make themselves look morally superior just because they initiated, shared or supported a funding campaign. Similarly, if you’re posting pictures of yourself doing volunteer work, partaking in political theatrics, appropriating cultural clothing or symbols or (in the case of the #BlackLivesMatter movement) posing with your one friend who happens to be a person of color for the sake of public validation, it doesn’t actually improve your public image. It just makes you look disingenuous.

June 3, 2020
Systemic Racism, White Privilege and the Nature of Sin
Next Post 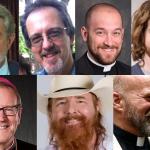 June 16, 2020 7 Prominent Catholic Voices Who Influenced My Return To The Church
Browse Our Archives
Related posts from Coffee and Crucifix