There is an extended footnote in Walker Percy’s Lost in the Cosmos: The Last Self-Help Book on the print-edition of Carl Sagan’s Cosmos (Now available with a preface by deGrasse Tyson and new tie-dye art. MOICHANDISING!).

It seems to me that the footnote also hits the spot for deGrasse’s Cosmos: A Space-Time Odyssey whose earnest but appalling rewriting of history was featured on CosmosTheInLost here (cold cosmos), here (Bruno), and here (Hypatia and other myths).

But before I get all wound up again, I’ll let Walker Percy take the floor instead.

As you read this extended passage (from the bottom of pages 201 and 202 in the Picador edition of Lost in the Cosmos), you should keep in mind that “scientism” is the metaphysical doctrine that would have you believe that all value and judgment can only be derived from scientific type experimentation and judgments. It is a self-refuting belief, because “scientism” cannot be affirmed through the above-mentioned purely “scientistic” criteria.

Self-aware science is much more sagacious about its limitations. Keep this in mind, so that you don’t get the idea that my many posts on science and religion are about putting down the immense contributions of science to society (even theology). If you’re looking for fundamentalists to bully, then look elsewhere.

To borrow and twist a favorite Cosmos: A Space-Time Odyssey turn of phrase… this is a story about you and me [sic!] and scientism:

“This chapter, as well as other parts of the book, owes a good deal to Carl Sagan’s splendid picture book, Cosmos. I hope he will not take offense at some fanciful extrapolations therefrom. Sagan’s book gave me much pleasure, a pleasure which was not diminished by Sagan’s unmalicious, even innocent, scientism, the likes of which I have not encountered since the standard bull sessions of high school and college—up to but not past the sophomore year. The argument could be resumed with Sagan, I suppose, but the issue would be as inconclusive as it was between sophomores. For me it was more diverting than otherwise to see someone sketch the history of Western scientific thought and leave out Judaism and Christianity. Everything is downhill after the Ionians and until the rise of modern science. There is a huge gap between the destruction of the library at Alexandria and the appearance of Copernicus and Galileo. So much for six thousand years of Judaism and fifteen hundred years of Christianity. So much for the likes of Aristotle, Hippocrates, Galen, Aquinas, Roger Bacon [not to be confused with Francis the Bacon], Grosseteste. So much for the science historian A.C. Crombie, who wrote: ‘The natural philosophers of Latin Christendom in the thirteenth and fourteenth centuries created the experimental science characteristic of modern times.’

So much, indeed, for the relationship between Christianity and science and the fact that, as Whitehead pointed out, it is no coincidence that science sprang, not from Ionian metaphysics, not from the Brahmin-Buddhist-Taoist East, not from the Egyptian-Mayan astrological South, but from the heart of the Christian West, that although Galileo fell out with the Church, he would hardly have taken so much trouble studying Jupiter and dropping objects from towers if the reality and value and order of things had not first been conferred by belief in the Incarnation.

Yet one is not offended by Sagan. There is too little malice and too much ignorance. It is enough to take pleasure in the pleasant style, the knack for popularizing science, and the beautiful pictures of Saturn and the Ring Nebula.

Indeed, more often than not, I found myself on Sagan’s side, especially in his admiration for science and the scientific method, which is what he says it is — a noble, elegant, and self-correcting method of attaining a kind of truth — and when he attacks the current superstitions, astrology, UFO’s, parapsychology, and such, which seem to engage the Western mind now more than ever — more perhaps than either science or Christianity.

What is to be deplored is not Sagan’s sophomoric scientism — which I think better than its counterpart, a sophomoric theism which attributes the wonders of the Cosmos to a God who created it like a child with a cookie cutter — no, what is deplorable is that these serious issues involving God and the nature of man should be co-opted by the present disputants, a popularizer like Sagan and fundamentalists who believe God created the world six-thousand years ago. It’s enough to give both science and Christianity a bad name.

Really, it is a case of an ancient and still honorable argument going to pot. Even arguments in a college dormitory are, or were, conducted at a higher level.

It is for this very reason that we can enjoy Cosmos so much, for the frivolity of Sagan’s vulgar scientism and for the reason that science is, as Sagan says, self-correcting. One wonders, in fact, whether Sagan himself has not been correted, e.g., by Hubble’s discovery of the red shift and the present growing consensus of the Big Bang theory [proposed by a Catholic priest, Georges Lemaître] of the creation of the Cosmos, which surely comes closer than Sagan would like to the Genesis account of creatio ex hihilo.”

The vulgar dorm-room scientism was on display in the second episode of Cosmos when the host made it his job to preach to the choir about human beings being interconnected with the rest of nature as if the Great Chain of Being wasn’t a part of our mental furniture since time immemorial.

Yet despite the connections, and there’s no doubt they’re there, the new Cosmos series hasn’t answered the following questions from Percy’s Lost in the Cosmos. These are questions about those handful percent of DNA that make us so weird (not that he’s arguing for special creation here), that allow us to make TV shows about evolution, that allow us to step back from the cosmos and describe it:

“How you can survive in the Cosmos about which you know more and more while knowing less and less about yourself, this despite 10,000 self-help books, 100,000 psychotherapists, and 100 million fundamentalist Christians?

Why is it that of all the billions and billions of strange objects in the Cosmos – novas, quasars, pulsars, black holes – you are beyond doubt the strangest?

Why is it possible to learn more in ten minutes about the Crab Nebula in Taurus, which is 6,000 light-years away, than you presently know about yourself, even though you’ve been stuck with yourself all your life?”

Watch the Jefferson Lecture “The San Andreas Fault in the Modern Mind” for a quick rundown of Walker Percy’s thinking about these issues. It is also available in print in the collection Signposts in a Strange Land.

Finally, if you still doubt it, here’s something to prove that I have a sense of humor about these things:

March 21, 2014 The Eclipse of Science During Those Terrible Middle Ages
Recent Comments
0 | Leave a Comment
"Wait a minute, what am I missing? The host must contain some gluten, lest it ..."
RPlavo . The Surprising Anti-Capitalist Logic Behind the ..."
"Gluten intolerance is completely -- and I mean completely -- different from celiac disease. Many ..."
Bobby Lawndale The Surprising Anti-Capitalist Logic Behind the ..."
"Read Bruno's comment: #2 below your ranting comment."
Adrienne Szatkowski Michael Voris’s Stunning and Admirable Broken-Hearted ..."
"Science needs "a confession of sins and an articulate profession of faith"? Seriously?Certainly, individual scientists ..."
Elzbieta 2 Reasons Why the March for ..."
Browse Our Archives
get the latest updates from
Cosmos The In Lost
and the Patheos
Catholic
Channel
POPULAR AT PATHEOS Catholic
1 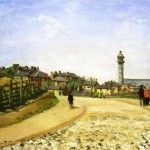