The manned moon landing might have been staged in a television studio somewhere in West Burbank. If that’s the case then the moon landing was exclusively a victory for science and skepticism in a strange way.

Now, for those of us living in the real world the wars between science and religion ought to look like a stupid distraction from reality.

Let’s be honest: early modern science was encouraged by medieval religious institutions, the leading evolution school handbook was written by a Catholic, modern science has positively shaped theology, the Copernican model was not a cosmic demotion, and the conflict-narrative heroes of the science vs. religion wars such as Hypatia and Bruno are easy to debunk.

The narrative of conflict is helped by some suppression of information. For example, anyone who actually cares enough to do the research would know that the first moonwalk was immediately preceded by communion. This is the case because the first people on the moon were both scientists and committed believers (not atheists). Buzz Aldrin (read his autobiography) was a Presbyterian elder and here’s how he described the reasons behind what he did:

“In a little while after our scheduled meal period, Neil would give the signal to step down the ladder onto the powdery surface of the moon. Now was the moment for communion.

So I unstowed the elements in their flight packets. I put them and the scripture reading on the little table in front of the abort guidance system computer.

Then I called back to Houston.

In the radio blackout I opened the little plastic packages which contained bread and wine.

I poured the wine into the chalice our church had given me. In the one-sixth gravity of the moon the wine curled slowly and gracefully up the side of the cup. It was interesting to think that the very first liquid ever poured on the moon, and the first food eaten there, were communion elements.”

NASA was leery about broadcasting this liturgical moment because of the intolerant fundamentalism of atheist humbug Madalyn Murray O’Hair. She had previously sued NASA for the public reading of Genesis by the crew of Apollo 8.

Neil Armstrong, who sometimes passed as a Deist (not to be confused with an atheist), sometimes as a Christian, respectfully sat back and watched the whole thing unfold.

And thus the myth-narrative of conflict continues to be propagated.

Can’t we find a way toward communion?

If you’ve enjoyed this debunking then you might also enjoy the other installments in the Famous Atheist series where we blur the lines between perceived non-belief of famous personalities by contrasting it with their actual religious practice. Previous posts include the stories of Camus, Sartre, Heidegger, and Hitchcock.

My 5 y/o son made me post this instead of the actual footage of the landing (which might be fake anyway if you look at the titles of most YouTube videos about it): 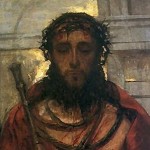 July 23, 2014 To What Degree is First Things Responsible for Iraq?
Recent Comments
0 | Leave a Comment
"Wait a minute, what am I missing? The host must contain some gluten, lest it ..."
RPlavo . The Surprising Anti-Capitalist Logic Behind the ..."
"Gluten intolerance is completely -- and I mean completely -- different from celiac disease. Many ..."
Bobby Lawndale The Surprising Anti-Capitalist Logic Behind the ..."
"Read Bruno's comment: #2 below your ranting comment."
Adrienne Szatkowski Michael Voris’s Stunning and Admirable Broken-Hearted ..."
"Science needs "a confession of sins and an articulate profession of faith"? Seriously?Certainly, individual scientists ..."
Elzbieta 2 Reasons Why the March for ..."
Browse Our Archives
get the latest updates from
Cosmos The In Lost
and the Patheos
Catholic
Channel
POPULAR AT PATHEOS Catholic
1

The Oxford School Shooting and its...
Steel Magnificat
Related posts from Cosmos The In Lost