(1) Vanhoozer regularly says that the Church is a product of the Word, by which in context he evidently means the Scripture. But this is exactly the wrong order. The Church is produced by the Word, certainly, in the sense that the Logos Incarnate converted the apostles, but the Word in this sense is not the same thing as the Scriptures, as the written word. The Church — the people of God — preexisted the Scripture, and the hierarchy of the Church, through the biblical authors who were teaching authorities within the people of God, produced the New Testament Scripture. The Scripture is the mind of the Church “stamped” onto paper, so to speak. Indeed, the New Testament epistles are authoritative interventions in the hermeneutical activities of various churches. This shows that theological authority ultimately resides in persons, who know how to interpret the text they’ve produced, rather than the text above everyone else. The people of God with the “mind of Christ” (1 Cor 2:16) preexists the Scripture and produces it and continues to exist even after the production of the Scripture. This means that the Church as a general body — in some way, by some mechanism — has to know what the Scripture means and be capable of interpreting it authoritatively. 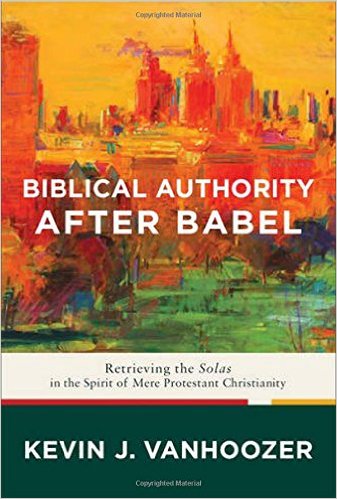 views tradition as a fallible, ancillary source to Scripture. Vanhoozer supposes that he can save Protestantism from the charge of interpretive anarchy by according tradition with this limited role, but I don’t see how this is anything more than mere lip service. Tradition is good, so long as it does not contradict the Scripture — but no one in the tradition ever took himself to be contradicting the Scripture! Traditional doctrines and practices trace, in some way, back to Scripture. So inevitably the rejection of a tradition means setting oneself (or one’s denominational body, etc.) as a better interpreter of the text than previous figures. Why do Protestants reject iconography, prayers for the dead, (some) baptism of children, etc.? These are traditions. “Because they are not compatible with Scripture.” But since people justify these traditions ultimately by reference to Scripture, this is just another claim to interpretive power. So long as tradition can only agree with Scripture (as we interpret it), rather than telling us what Scripture means, we are still the ultimate interpretative authority

(3) Claims about authority to bind and loose — e.g. Mt 16:19, 18:18 — which are given to Jesus’ eyewitnesses disciples are interpreted, without any obvious reason, to confer authority upon the everyone within the church generally, and limited to the local congregation. I don’t see why a person should accept this interpretation of the text, but a lot of mere Protestant Christianity’s ecclesiological vision goes out of the window if we reject this particular reading. The “disciples” in Matthew are generally, if not always, the Twelve (cf. Mt 10). Those are the persons who received the power to bind and loose, Peter the one who received the keys. This is also obvious reading Acts — the apostles exercised teaching and binding/loosing authority; not just anyone teaches but only the apostles and the elders. It seems to me that this reading only becomes plausible if you reject a priori the Catholic reading as beyond the pale.

(4) The way to address differences of opinion about Scriptural interpretation is by way of council and discussion. Of course, these take place among Protestants who share a certain set of background axioms: namely, that no one honestly and attentively reading the Bible under the guidance of the Holy Spirit could ever come to the conclusions that the Roman Catholic (or Orthodox) Church teaches, say about faith/works or icons or other such issues. These are all obvious misreadings. So mere Protestant Christianity knows a priori what the Bible doesn’t teach. How is this not simply the establishment of an anti-magisterium, with its own authoritative tradition? . . .

May 4, 2017
Atheists Have "National Day of Reason," But American Atheism is Irrational
Next Post

May 19, 2017 Publicity Campaign Freudian Slip: Planned Parenthood Wants You to "Slay" With Them
Recent Comments
0 | Leave a Comment
"So you in fact did not vote for the lesser of two evils but instead ..."
gethoht Hunter S. Thompson’s Fear and Loathing ..."
"Wait a minute, what am I missing? The host must contain some gluten, lest it ..."
RPlavo . The Surprising Anti-Capitalist Logic Behind the ..."
"Gluten intolerance is completely -- and I mean completely -- different from celiac disease. Many ..."
Bobby Lawndale The Surprising Anti-Capitalist Logic Behind the ..."
"Read Bruno's comment: #2 below your ranting comment."
Adrienne Szatkowski Michael Voris’s Stunning and Admirable Broken-Hearted ..."
Browse Our Archives
Related posts from Cosmos The In Lost