Faulkner wrote, “The past is never dead. It’s not even past,” in his Requiem for a Nun.  One prime example is World War II. The memory of this almost now mythical conflict continues to shape the Western social imaginary in a multitude of ways; for example, Western Europeans use it to bolster their unpractical cowardly pacifism, while the Americans use it to bolster their equally unpractical rash militarism.

Even more profoundly, the Holocaust has become an almost metaphysical measuring stick of humanity’s capacity for radical evil. In his essay collection Prisms Adorno made the claim (frequently cited out of context as I shall do in a second) that, “To write poetry after Auschwitz is barbaric.” Whatever this statement meant in its original context, it has come to mean that the Holocaust was such an unprecedented event, that it caused a such rupture in our social imginary, that it rendered certain modes of life, ways of comporting yourself to reality, forms of thinking, impossible.

Timothy Snyder’s Bloodlands: Europe Between Hitler and Stalin puts the Holocaust within its Central European context.  What’s frequently lost is how Snyder’s international bestseller suggests the Holocaust is not some ahistorical transcendent metaphysical essence, but rather a contingent historical event. First of all, Snyder’s book puts the Holocaust within the context of the genocides perpetrated against other populations stuck between Germany and the Soviet Union. Second, Bloodlands gives a thorough account of the Generalplan Ost: the secret German plan to exterminate the Slavs so that Germans could repopulate their lands and take advantage of the Ukrainian breadbasket.

The extermination of the Slavs was Germany’s main plan. What they did not anticipate was the strength of the Soviet resistance and how the herding of Jewish populations would cause the Nazis logistical problems. The rapid accumulation of large populations in ghettos led the Germans to send them to preexisting concentration camps. These camps were first used to systematically kill Catholic clergy, Polish resistance fighters, and Communists.

Even with this murderous diversion the toll on non-Jewish Poles was still high. Snyder estimates the toll on the gentile, mostly Catholic population, at around 2.7 million deaths. When combined with the catastrophic loss of three million Polish-Jewish lives (not uniform in their adherence and non-adherence to various forms of Judaism) this means that Poland lost about one-sixth of its prewar population. Can you even imagine one in six people you know being murdered in the span of around five years? You should, because given human nature, it is a distinct possibility in any historical period.

Some have even gone as far as calling the extermination of Poland’s Catholic population The Forgotten Holocaust. Whether this controversial claim is accurate is beyond the scope of this post, however, one thing is clear, had history turned out differently, in an alternate, not at all unlikely history, Western civilization might have been perpetually haunted by the extermination of Europe’s Slavs.

Today is the anniversary of Poland’s invasion by the Nazi Blitzkrieg, the day that set all those historical contingencies into motion. W.H. Auden thought through the significance of the event almost live in a poem you will no doubt see flashing across social media several times today:

I sit in one of the divesOn Fifty-second StreetUncertain and afraidAs the clever hopes expireOf a low dishonest decade:Waves of anger and fearCirculate over the bright
And darkened lands of the earth,
Obsessing our private lives;
The unmentionable odour of death
Offends the September night.

Accurate scholarship can
Unearth the whole offence
From Luther until now

That has driven a culture mad,
Find what occurred at Linz,
What huge imago made
A psychopathic god:
I and the public know
What all schoolchildren learn,
Those to whom evil is done
Do evil in return.

Exiled Thucydides knew
All that a speech can say
About Democracy,
And what dictators do,
The elderly rubbish they talk
To an apathetic grave;
Analysed all in his book,
The enlightenment driven away,
The habit-forming pain,
Mismanagement and grief:
We must suffer them all again.

Into this neutral air
Where blind skyscrapers use
Their full height to proclaim
The strength of Collective Man,
Each language pours its vain
Competitive excuse:
But who can live for long
In an euphoric dream;
Out of the mirror they stare,
Imperialism’s face
And the international wrong.

Faces along the bar
Cling to their average day:
The lights must never go out,
The music must always play,
All the conventions conspire
To make this fort assume
The furniture of home;
Lest we should see where we are,
Lost in a haunted wood,
Children afraid of the night
Who have never been happy or good.

The windiest militant trash
Important Persons shout
Is not so crude as our wish:
What mad Nijinsky wrote
About Diaghilev
Is true of the normal heart;
For the error bred in the bone
Of each woman and each man
Craves what it cannot have,
Not universal love
But to be loved alone.

From the conservative dark
Into the ethical life
The dense commuters come,
Repeating their morning vow;
“I will be true to the wife,
I’ll concentrate more on my work,”
And helpless governors wake
To resume their compulsory game:
Who can release them now,
Who can reach the deaf,
Who can speak for the dumb?

All I have is a voice
To undo the folded lie,
The romantic lie in the brain
Of the sensual man-in-the-street
And the lie of Authority
Whose buildings grope the sky:
There is no such thing as the State
And no one exists alone;
Hunger allows no choice
To the citizen or the police;
We must love one another or die.

Defenceless under the night
Our world in stupor lies;
Yet, dotted everywhere,
Ironic points of light
Flash out wherever the Just
Exchange their messages:
May I, composed like them
Of Eros and of dust,
Beleaguered by the same
Negation and despair,
Show an affirming flame.

Auden was a fine religious thinker, as Stephen J. Schuler demonstrated in his The Augustinian Theology of W.H. Auden (see also: Arthur Kirsch’s Auden and Christianity) who understood how Original Sin twists individual and collective psyches. The following lines from the above poem demonstrate this twisted logic better than just about anything else I’ve ever read:

Those to whom evil is done
Do evil in return.

Auden spent a great deal of time in interwar Germany and understood how the punitive reparations for World War I imposed upon that country created a culture of resentment. They were so punitive that World War I effectively ended only a few years ago when Germany finally paid off its debts.

Who knows how history might have turned out had the French and Americans been wiser at Versailles?

I don’t know, but all this ultimately suggests to me the potentially positively disruptive power of forgiveness. Perhaps, this is a much more promising vein, in our very own “low dishonest decade” for looking at contemporary conflicts, rather than seeing them in terms of a battle of absolute good against absolute evil?

Yes, Holocausts are possible. Yes, they will happen. Unresolved contingencies stipulate the possibility that there might be several possible Holocausts underway right now. Will negation and despair win out, or will anyone have the crazy idea to put forward an affirming flame?

One thing is clear: thank God poetry is still here with us to provoke us into thinking about all the complexities of these situations and the radical possibility of forgiveness and hope.

August 28, 2014
The Call to Being Has Already Exiled You: Sam Rocha's Late to Love
Next Post 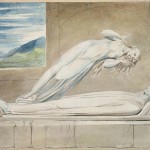 September 2, 2014 FACT: Christians DON'T Believe in the Immortality of the Soul
Recent Comments
0 | Leave a Comment
"So you in fact did not vote for the lesser of two evils but instead ..."
gethoht Hunter S. Thompson’s Fear and Loathing ..."
"Wait a minute, what am I missing? The host must contain some gluten, lest it ..."
RPlavo . The Surprising Anti-Capitalist Logic Behind the ..."
"Gluten intolerance is completely -- and I mean completely -- different from celiac disease. Many ..."
Bobby Lawndale The Surprising Anti-Capitalist Logic Behind the ..."
"Read Bruno's comment: #2 below your ranting comment."
Adrienne Szatkowski Michael Voris’s Stunning and Admirable Broken-Hearted ..."
Browse Our Archives
Related posts from Cosmos The In Lost