Ever since graduation my mornings have followed the routine of studying actively-engaged anthropology. tears, poop, and pee are my daily bread. My post-doctoral work consists of taking care of our two young girls while the eldest boy is now finally (and mercifully) off to kindergarten.

At the same time I am in the middle of writing for you and an intensive job search that might take me out of academia (do contact me if you have any leads, academic or otherwise). In between revising CVs and mailing out job applications I am inundated with the afore mentioned tears, pee, and poop.

All of this all too human material I’m working with reminds me of the words of Gregory Wolfe, editor of IMAGE Journal, a leading literary journal that deals with the arts and faith, in one of his editorials:

It seems to me this combines well with the prayer frequently attributed to Theresa of Avila:

I can’t say I’m doing a good job with this balancing act, but at least now you understand my obsession with incarnational theology and my affection for the new Davies book Theology of Transformation.

Now, the caption to yesterday’s featured image went as far as the feet and the loincloth of Christ. Today we’ll rip the curtain of the temple and take a peek behind it with the help of Leo Steinberg’s The Sexuality of Christ in Renaissance Art and in Modern Oblivion. His book caused quite the controversy when it first came out, but his findings have stood the test of time. Steinberg sums up his argument as follows:

“The first necessity is to admit a long-suppressed matter of fact: that Renaissance art, both north and south of the Alps, produced a large body of devotional images in which the genitalia of the Christ Child, or of the dead Christ, receive such demonstrative emphasis that one must recognize an ostentatio genitalium comparable to the canonic ostentatio vulnerum, the showing forth of the wounds.”

The problem is not with the iconographers, but with us oblivious moderns who are Docetist enough to refuse to see what is in plain sight. For the first millennium of its existence the Church slightly played down the humanity of Christ for apologetic reasons, because of the shameful death, and charges from opponents that Christ was merely a human charlatan. Orthodox iconography is still reluctant to face up fully to Christ’s humanity. Many an Orthodox theologian has spilled ink writing on how blasphemous Western depictions of Christ as fully human are.

The Christian shame about Christ’s humanity was eclipsed in part thanks to St. Francis and his emphasis upon the stark naked humanity, even poverty, of Christ. One of the early Franciscan mottoes was “nudus nudum Christum sequi,” or “follow naked the naked Christ.” This emphasis drove the revolution in painting toward realism as in Giotto’s frescoes of St. Francis.

Ultimately it worked itself out in 15th and 16th century paintings where Christ’s humanity was emphasized by the following means: the Madonna gesturing toward the Child’s member, with blood flows in crucifixions that ran across the genitalia, suggestive bumps in the cloth of the dead Christ, and, yes, with penis-like shapes embedded in crucifixion abdomens.

All of this was not sensationalism, instead it served a theological purpose. Steinberg again, it’s hard not to enjoy his penchant for innuendo:

And then it is the Renaissance image of Christ which reveals divine condescension, as it were, in extremis ; God joining himself to the human condition to the point of sharing with man even that portion wherein retribution for Original Sin is most apparent, most vitiating . . . . It is orthodox thinking, implanted in Christian doctrine. But few spelled it out, since word processors, religious or otherwise, Renaissance or epigonic, studied to shun the unmentionable. Thus the Christology of Renaissance art remains largely unverbalized, coming to us only as something to see.

So there you have IT. Give The Sexuality of Christ in Renaissance Art and Modern Oblivion a read and you’ll note there’s something there to see. The countless examples Steinberg gives are enough to convert any skeptic.

I gotta go and change a diaper. I wonder how I can fully integrate that into my spiritual life.

I leave you with a few words on Steinberg’s revolutionary influence upon art criticism: 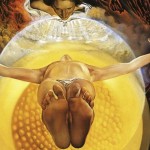 September 3, 2014
Christ Is No Longer On Top
Next Post

September 8, 2014 What Do We Talk About When We Talk About Art and Revelation?
Recent Comments
0 | Leave a Comment
"Wait a minute, what am I missing? The host must contain some gluten, lest it ..."
RPlavo . The Surprising Anti-Capitalist Logic Behind the ..."
"Gluten intolerance is completely -- and I mean completely -- different from celiac disease. Many ..."
Bobby Lawndale The Surprising Anti-Capitalist Logic Behind the ..."
"Read Bruno's comment: #2 below your ranting comment."
Adrienne Szatkowski Michael Voris’s Stunning and Admirable Broken-Hearted ..."
"Science needs "a confession of sins and an articulate profession of faith"? Seriously?Certainly, individual scientists ..."
Elzbieta 2 Reasons Why the March for ..."
Browse Our Archives
get the latest from
Cosmos The In Lost
Sign up for our newsletter
POPULAR AT PATHEOS Catholic
1