What’s the Most Epic Book Genre Mislabel in Publishing History?

Have you ever noticed how nearly every book you’ve ever picked up that’s not self-published has a genre label in the upper corner of its back cover?

Some books are notoriously difficult to label. I mean, what genre is Calasso’s The Ruin of Kasch, Kundera’s The Book of Laughter and Forgetting, or Herman Broch’s The Sleepwalkers? Are they fiction, history, philosophy, or something else altogether?

One such book is Karl Barth’s The Epistle to the Romans. The blurb for the book is a generic soup of vapid prose that tells you nothing about the book. If you go with a dialectical reading of the blurb, then it tells you everything the book is by writing in a non-committal style that’s the total opposite of what you find between the covers:

This volume provides a much-needed English translation of the sixth edition of what is considered the fundamental text for fully understanding Barthianism. Barth–who remains a powerful influence on European and American theology–argues that the modern Christian preacher and theologian face the same basic problems that confronted Paul. Assessing the whole Protestant argument in relation to modern attitudes and problems, he focuses on topics such as Biblical exegesis; the interrelationship between theology, the Church, and religious experience; the relevance of the truth of the Bible to culture; and what preachers should preach.

This is not the funny part. The funny part is that OUP inexplicably decided to label the book’s genre as “RELIGION.” 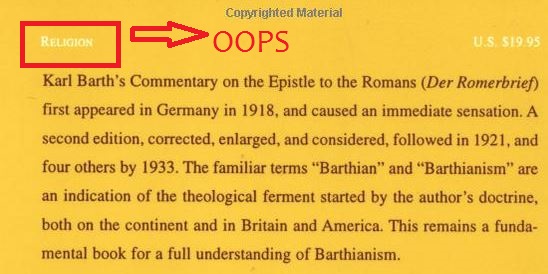 Now, if you know anything about Barth and Barthianism then you know that THE ONE THING HE HATED MOST were self-confident human institutions, which he labeled as “RELIGION.”

Here’s Barth on religion in The Epistle to the Romans:

This is the situation in which we find ourselves. The question’ Is there then a God ?’ is therefore entirely relevant and indeed inevitable! But the answer to this question, that is to say, our desire to comprehend the world in its relation to God, must proceed either from the criminal arrogance of religion or from that final apprehension of truth which lies beyond birth and death—the perception, in other words, which proceeds from God outwards. When the problem is formulated thus, it is evident that, just as genuine coins are open to suspicion so long as false coins are in circulation, so the perception which proceeds outwards from God cannot have free course until the arrogance of religion be done away. Now, it is the Gospel that opens up the possibility of this final perception, and, if this possibility is to be realized, all penultimate perceptions must be withdrawn from circulation. The Gospel speaks of God as He is: it is concerned with Him Himself and with Him only. It speaks of the Creator who shall be our Redeemer and of the Redeemer who is our Creator.

The concept of “religion” appears nearly 500 times in Barth’s book. And this is perhaps one of the nicest things he has to say about “religion” in the whole book.

In labeling Barth’s book as “religion” OUP was either perverse, stupid, or mischievous.

Either way, this must be the most epic book mislabeling ever. Can you think of any genre labels better/worse than this? I dare you.

Please consider helping me out through tough times through the PayPal donate button on my homepage. 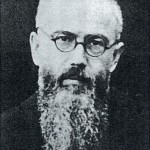 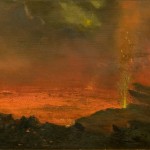 Five Years of Troublemaking: A Retrospective
Steel Magnificat
Related posts from Cosmos The In Lost