Don’t Give Up For Lent

To the outsider the season of Lent might seem like an irrational outbreak of Pelagianism. Believers who come from the Catholic tradition, and the Protestant traditions which are rediscovering the ancient Catholic ascetic tradition, busy themselves with what they’re going to give up for Lent. It all sounds like an Olympiad of will-to-power. The responses run something like, “I can’t believe you’re giving up X for Lent. I couldn’t live without it for so long. You’re so brave!”

As I watch this spectacle from the sidelines I start fearing that there’s no way I could possible participate in all that. It makes me think of my longtime insomnia and how much effort I expend each night dreading my inability to surrender everything I failed to do during the day and feeling dread over everything the next morning will bring. This festival of vanity then translates itself into a Heideggerian general anxiety about our travail being nothing but a being-onto-death, but one I cannot willingly accept as my fate. It is beyond my powers.

Marvin C. Shaw’s The Paradox of Intention, a book I discovered while researching Christian practices of silence, speaks to this very point when one reaches the end of one’s rope:

Normally, we assume that goals are reached through the expenditure of mental and physical effort, and the so-called paradox of intention strikes us as perhaps intriguing, as some sort of mental puzzle, but finally as illogical and unavailaing. Now if this or any other difficulty arises, and the point of what you are reading escapes you, you have an opportunity to put into practice this paradoxical method we are attempting to understand. Simply take the advice of the medieval Christian mystic Suso, let go of the effort to grasp the meaning . . .

Just try not thinking about a bear. No BEAR!

Augustine’s Confessions further dramatizes both the paradox and salvation from it.

But the abyss of the human conscience lies naked to your eyes, O Lord, so would anything be secret even if I were unwilling to confess to you? I would be hiding you from myself, but not myself from you. But now that my groans bear witness that I find no pleasure in myself, you shed light upon me and give me joy, you offer yourself, lovable and longed for, that I may thrust myself away in disgust and choose you, and be pleasing no more either to you or to myself except in what I have from you . . . Let me, then, confess what I know about myself, and confess too what I do not know, because what I know of myself I know only because you shed light on me, and what I do not know I shall remain ignorant about until my darkness becomes like bright noon before your face.

Pope Gregory’s Moral Reflections on Job, working off of Isaiah, explain how the face of God appears to us as we go through this process of educating our desires.

I make good fortune and create calamity, because when we wrongly covet things which it was right for God to create, they are turned into scourges and we see them as evil. We have been alienated from God by sin, and it is fitting that we should be brought back to peace with him by the scourge. As every being, which was created good, turns to pain for us, the mind of the chastened man may, in its humbled state, be made new in peace with the Creator.

Everything that God creates is good since it draws its being from himself. However, we only see the world as evil, and alienate ourselves from God, if we use the things within it incorrectly (I believe Augustine’s On Christian Teaching was the first theologically systematic account of this). So in the end Lent is crowned not so much by giving up anything in particular, but clinging to the graces God freely gives us.

It is a time specifically designated for giving up on ourselves and our efforts, so that we can throw ourselves onto the heartbreaking mercy of God, so in the end we regain all that we have lost in the proper perspective, before God’s face, not in the deceiving reflections of our own willpower. If there was one thing that the Early Christians taught us, it’s that seeking the face of God should be our sole concern. In a more modern idiom, this involves what Jean-Luc Marion calls an inverse intentionality, or, in Dante’s idiom, “E ‘n la sua volontade è nostra pace.”

How to find God’s will and our pace? The Liturgy of Hours is one of the best places to start. Holy tears might also help to obscure our misguided view of ourselves.

May God shatter your heart this Lent, because your own self, like mine, might be such a good thing.

Don’t give up through your own will, cling to God’s will for you, because you’re never ultimately the one doing the giving.

You might also want to take a look at He Emptied Himself: A Kenosis Reading List, which has some great books that you might want to take up for Lent. 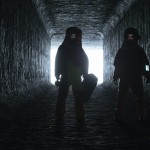 February 26, 2017
Oscar Best Picture Nominee "Arrival" and the Bearable Heaviness of Being
Next Post

March 3, 2017 Extraterrestrials Aren't a Threat to Theology, Because They Aren't New to the Ancient Church
Recent Comments
0 | Leave a Comment
Browse Our Archives
get the latest from
Cosmos The In Lost
Sign up for our newsletter
POPULAR AT PATHEOS Catholic
1

Catholic
How Did the Resurrection Historically Affect Reason?
Cosmos The In Lost