Not too long ago I posted my own review of Steve Moyise’s excellent reflection on scholarly approaches to biblical intertextuality (i.e., Old in New) [see HERE].  I asked Steve if he would answer some questions about his background, current issues in intertextuality, how this kind of research affects the church, and also future directions for the area of study.  He was kind enough to agree to do an interview on my blog.  By the way, I was recently at the Tyndale Fellowship New Testament Conference (Cambridge, UK) and a number of papers dealt with 1 Peter’s use of scripture.  I told some of these students to immediately go out and buy Steve’s book because it is an invaluable resource.  Without further ado, the interview.

QUESTION #1: What got you interested in intertextuality and studying the relationship between the Old and New Testaments?

My interest in OT in NT stems from an interest in biblical interpretation and how the Bible is used to support different ethical and theological positions. I was specifically led to literary theories of intertextuality as a way of exploring how texts interact with one another in the book of Revelation.

QUESTION #2: How biblical scholars refer to what has been traditionally called by Christians the ‘Old Testament’ is a matter of debate – Hebrew Bible, Jewish Scriptures, Old Testament, Scripture, etc… Is there a good term that we can all use, or do you think the diversity of expression is unvoidable?  What do you use?

Though Hebrew Bible is becoming popular, it is misleading to speak of the NT authors using the Hebrew Bible as most of the quotations are drawn from Greek texts. Indeed, some authors (Luke) may not have known any Hebrew texts. In general I prefer Jewish scriptures but I also use OT on the basis that most readers understand the body of literature to which it refers.

QUESTION #3: Could you recommend four books for someone to read to get into the study of the New Testament interaction with the Old Testament (with at least one source dating before 1980)?

The discovery of the Dead Sea Scrolls (1948- ) marked a turning point in the study of the OT in NT. The pioneers to use this material were scholars like Earle Ellis (Paul), Barnabas Lindars (NT), Krister Stendahl (Matthew) and Anthony Hanson (NT, Paul). For beginners, Lindars (NT Apologetic, SCM, 1961) is still a good read.

The publication of Echoes of Scripture in the Letters of Paul (Yale, 1989) by Richard Hays, marks the beginning of applying more sophisticated literary approaches to Paul and is essential to understand the modern debate. A useful critique of this “sophistication” comes from Chris Stanley (Arguing with Scripture, T&T Clark, 2004) who focuses on what Paul’s congregations might have understood. A fourth book is a recent collection edited by Stanley Porter called Hearing the OT in the New (Eerdmans, 2006), which offers a good introductory survey to the modern discussion (I wrote the endorsement on the back).

QUESTION #4: Why did you decide to write Evoking Scripture?  What are you trying to get across?

My main point is that the subject lends itself to a variety of approaches and each sheds light that others miss. In the various case studies, I aim to demonstrate this while delving into the various literary and theological presuppositions that often have a considerable influence on scholarly writing. If there is one point that I want to make, it is that no one approach has all the answers. In principle, there is no reason why one shouldn’t focus on the author, the reader or the text itself. As long as one recognizes the limitations of each approach.

QUESTION #5: On a different level, it is interesting that some missionary organizations and translation societies go to a people group that has previously not had the Bible translated into their language and produce only the New Testament (thinking they want to give the world the New Testament, because, for time’s sake, it is the core of the gospel and much shorter than the Old Testament).  How does it affect the literary-theological (setting aside the ability to better understand the historical background) interpretation of the NT for people who do not have the OT?  Is it still understandable?  What exactly is at stake with no Scripture to Evoke?  What is lost?  (I am not asking you to critique these translation societies, but to engage in the question of what is lost when a reader cannot detect the Scriptural themes and cues).

I believe the recipients of the NT documents had varying levels of scriptural knowledge (Stanley’s point) and so a good deal of understanding is possible. The authors often quote a text and then explain how they wish the readers to understand it. But having said that, it is undoubtedly like hearing only one half of a phone conversation. For example, there is a sustained engagement with Abraham in Galatians 3-4 and Romans 4. It is hard to understand what readers would make of this if they have never heard of Abraham. I once described this as concentrating on only the loudest instruments of an orchestra. You would get the “tune” but miss the subtlety that makes it the composition that it is.

QUESTION #6: What are you currently reading (even for fun!)?

For fun, I read detective novels – lots of murders and unseemly behaviour. For academic reading, I have 3 monographs to review over the summer. The topics are Jesus and the Gentiles, the use of Deut 30 in Rom 10, and the tradition history of Isa 6:9-10.

QUESTION #7: For students interested in moving into the study of the Old in the New or biblical intertextuality, can you recommend (broadly) some underexplored issues?

Work that seeks to combine Hellenistic and Jewish modes of persuasion (rhetoric) would make a valuable contribution. I have recently reviewed Strazicich’s book on Joel’s Use of Scripture and the Scripture’s Use of Joel (Brill, 2007) and many other books could similarly be studied. There remain important questions about the nature of the LXX textual tradition and the textual criticism of the NT. Stanley’s question of what a typical house church in the first century would have made of quotations/allusions is important.

QUESTION #8: As a scholar, what has been an area of study you have been interested in and read literature in, but have not had the time to publish in?  Put otherwise, what are your secondary or tertiary interests?

The answer to this is probably governed by the modules I teach at Chichester University, such as Jesus and the gospels and the NT Church. I wrote an introductory book on the former with Clive Marsh but might do something more academic on Mark in the future. A good text book on the different forms of church in the NT would be valuable but I don’t think I am the person to write it. 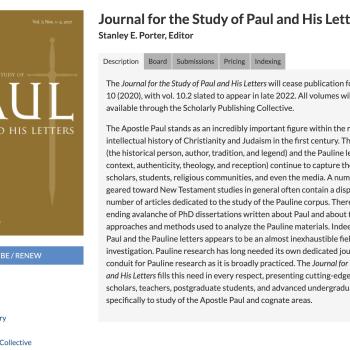 Evangelical
Journal for the Study of Paul and His...
Crux Sola: Formed by Scripture to Live like Christ 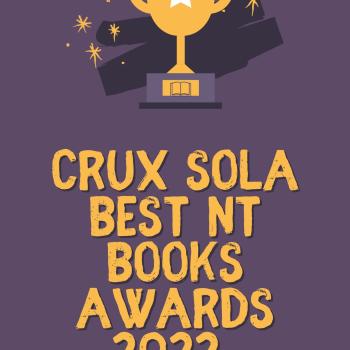