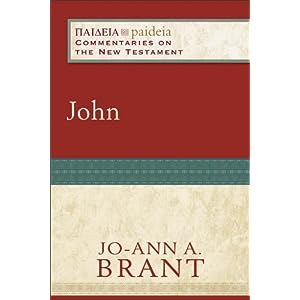 I have had a chance, in the past few years, to get my hands on most of the new Paideia commentaries (Baker), which seek to give “contemporary students a basic grounding in academic NT studies by guiding their engagement with NT texts” (xi). The series tends to have a literary-analytical focus, and also an ultimate interest in theological and moral formation. They have existing volumes on Hebrews, Acts, Matthew, Romans (Matera), and Ephesians/Colossians (Talbert). I have read those on Romans and Ephesians/Colossians and found them very well written. Talbert’s is certainly one of the best among Colossians commentaries.

So, what about Jo-Ann Brant’s new work on John? Firstly, she clearly knows her way around the study of John as well as the ancient world. She had to face quite a challenge because she had to squeeze a commentary on the 21 chapters of John into a 300-page text (which is a bit unfair because Talbert also works with about the same book length with much shorter material!).

Brant’s approach to John is essentially an ancient theatrical/dramatistic and rhetorical reading. She brings great wisdom from studying Greco-Roman literature, including social values, history, and the arts. No wonder some of her sidebars deal with things like “Diction,” “The Rhetoric of Exhortation,” “Proofs,” “Maxims,” “The Jab-and-Punchline-Joke”, etc…

What I appreciated about the commentary is that she brings something fresh to the table of study. It is like the Gospel of John is treated as a play and she sits next to you as you watch and coaches you on how plays work in the GR world and what you are supposed to “get” as you watch it. She is your guide to the ins and outs of symbols, coded language, dramastic technique, and the identification of types in these settings.

At the end of each section of commentary, there are short discussions of key themes and some pointers towards application. She does quite well here, dealing with thorny issues like (anti)sacramentalism in John, so-called supersessionism, and the role of signs in the Gospel.

Sometimes she might be accused of getting too deep into methodological jargon, as with her discussion of Mikhail Bakhtin and “chronotope” and the “spatiotemporal matrix in narrative” (67). Overall, though, she keeps it accessible.

She definitely gave me food for thought on a number of assumptions. She argues, for example, that we jump too quickly to the conclusion with the Samaritan woman that she is living with her lover when all Jesus says is that the person she is living with is not her husband. Brant finds it possible that she was living with a close relative like a brother and the issue is one of shame from not being married, not shame from being promiscuous (p. 85).

She also takes a rhetorical/dramatistic reading of John 5-6 to help support the idea that the given sequence of chapters may be original ( 115).

I thought her discussion of Anti-Judaism in John was helpful.

Demonizing one’s opponent when one is powerless, as early Christians were, is a protest against one’s status, but demonizing them when one stands in a position of power or when one knows that such words can incite violence is considered a hate crime in many modern nations (p. 149)

I think Brant shows a welcome bit of humor by pointing out that the Johannine Jesus, in John 17, violates the Matthean Jesus’ principle regarding prayer: “Keep it simple because God knows what you need before you ask for it” (224)! Ha!

And what about the mysterious catch of 153 fish? Why this number? Brant entertains the possibility that the BD was showing his true knowledge of the event by giving the exact number. But she also notes the opinion of Jerome (citing poet Oppianus Cilix) who urged that there were 153 types of fish in existence (p. 282).

So, what can we say about Brant’s commentary? It is learned and heavily (though not exclusively) weighted on the side offering insight into the Greco-Roman social and literary context. If this is your main John commentary, I am not sure it would be the most useful for preaching and teaching. I would suggest, comparing the type of commentary, Smith’s ANTC commentary or perhaps Lincoln’s BNTC volume. Nevertheless, if you love all things Johannine (as I do!), this won’t disappoint. So many things in this book I never knew and it opens a window of study (the theatrical perspective) that is rather appropriate to this Gospel in particular.

November 4, 2011
Newest issue of INTERPRETATION on Climate Change
Next Post

People Are Excited about a New...
Ponder Anew
Related posts from Crux Sola: Formed by Scripture to Live like Christ