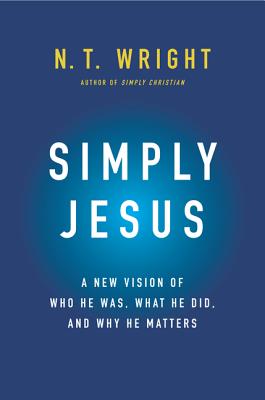 In this new work from N.T. Wright (HarperOne, 2011), he tries to articulate his vision of who Jesus was and is and what he was all about according to the Gospels (and somewhat from the rest of the NT). In this initial post, my goal is simply (!) to summarize, briefly, the shape of Wright’s story of Jesus and his significance. In later posts I will offer more critical analysis.

For Wright, there is so much confusion today over Jesus, partly because of culture and historical distance, partly because what Jesus actually did and said was peculiar. Thus, scholars and pastors and others have taken their turns trying to capture the “real Jesus.” Early on in the book, Wright challenges both liberal skeptics and conservative crusaders by urging them to set down their weapons of war and, instead of dwelling on questions only of “did it happen or didn’t it,” press on to ask “what about meaning?” (p. 19). [This is exactly the kind of concern I take up in my courses!] Wright rightly (!) points out how deeply symbolic phrases, acts, rituals, words, and certain ideas were in Jesus’ own time.

So, Wright tries to take us into the “perfect storm” of Jesus’ own situation to help us to see with first-century eyes. He refers to three storms that collide to make up the furious “perfect storm” of what we see in Jesus in the Gospels. The Roman storm was the wind of Caesar’s imperial power and good news (i.e., “gospel”) that followed as he brought pax. The Jewish storm was building expectation of a new exodus that would usher in the judgment of the Gentiles and the re-instatement of the honor and power of Israel and her God. These clashing tempests would be trouble enough, but we see the “wind of God” (as Wright calls it) coming in Jesus himself – “as he came to Jerusalem he was embodying, incarnating, the return of Israel’s God to his people in power and glory” (p. 38). Wright, early on (and frequently), connects the coming of Jesus with the promise of YHWH that he would rule as king again, solely, over his people and his creation. Even with David, while this man was “king,” it was actually God reigning as king through David (p. 42). However, no Israelite, it appears, was capable of predicting that Jesus would combine in himself “both the Davidic king and the returning God” (p. 54).

Wright observes just how important the repeated remembrance of the exodus (and its typology) was for Israel. It was a story about a wicked tyrant, a special leader, the victory of God, rescue by sacrifice, new vocation, the presence of God, and a promised land. Jesus fits quite well into this when he starts a new campaign: “He was the one in whose presence, work, and teaching Israel’s God was indeed becoming king” (85).

So why was Jesus’ teaching so cryptic, parable-driven, and enigmatic? It is because the kingdom/kingship of God was coming in a special and unpredictable way. Israel had tried out the militaristic/violent way of being messiah – it didn’t work (see chapter 9). Jesus was engaged in battle, but not with Romans or Greek. It was a cosmic war, a “clash of kingdoms” (p. 125).

Before venturing into more of the significance of Jesus, Wright takes a detour to talk about space, time, and matter from a Biblical perspective. He cuts through the heaven-obsession of many Christians by pointing out that heaven wasn’t “detached, wasn’t a long way off, but was always the place from which ‘earth’ was to be run” (p. 145).To align heaven and earth was to bring earth under the same kind of total God-ruled kingdom as heaven. This is precisely why Jesus is so unique and so uniquely suited to be the messiah. He embodies the place where heaven and earth meet. This is not escaptist theology. Jesus’ agenda was not to plan a retreat from earth to  heaven, but rather a desire that “God’s kingdom would come on earth as in heaven” (so the Lord’s prayer, see p. 148).

So, a natural question would be, if Jesus is God’s King, why did he die? This time, Wright’s answer is actually quite simple: love.

When the power of Rome and the betrayal of Israel’s leaders meets the love of God, the great whirlpool that results will bring about God’s kingly victory, the victory of the kingdom of God over the kingdoms of the world (p. 182).

To defeat “the tyrant” (death), a death was necessary to exhaust death itself of power. The substituted life of the loving other-centered, innocent one had the capacity to turn the tides of the cosmic war, indeed to win it. But this would require not just Jesus’ death, but also his resurrection. Resurrection does not simply bring Jesus back to life, but establish the new age.

This fits well within how Wright explains the relationship between heaven and earth. Heaven isn’t the distant paradise of our final salvation. By proclaiming that Jesus is enthroned now in heaven somehow means he is present everywhere on earth (p. 196) through his Spirit. What is heaven? “Heaven is God’s space, God’s dimension of present reality, so that to think of Jesus ‘returning’ is actually…to think of him presently invisible, but one day reappearing” (p. 202).

The final chapter of the book, perhaps the most important chapter after all, raises the question, “What on earth does it mean, today, to say that Jesus is king, that he is Lord of the world? (207)” It should be no surprise to you that Wright argues for a renewed sense of human vocation – “humans are to be God’s image-bearers, that is, they are to reflect his sovereign rule into the world. Humans are the vital ingredients in God’s kingdom project” (p. 212). This is not meant to be conceived of as an individualistic thing, but a corporate one. God calls the Church “to be the means through which Jesus continues to work and to teach, to establish his sovereign rule on earth as in heaven” (p. 220).

For “Further Reading” on Jesus, Wright restricted himself to a few items from more recent years from scholars like Allison, Bauckham, Dunn, Fisk, Keener, McKnight, Perrin, Pitre, and Vermes.

In the next part of the review, we will offer the “top 6 ideas” from Simply Jesus.

November 10, 2011
Joel Green explains CEB's translation choice of "The Human One"
Next Post

November 10, 2011 Review of N.T. Wright's Simply Jesus (Part 2: Six Big Ideas)
Recent Comments
126 Comments | Leave a Comment
"Hi Kerry, so glad Barr's book is getting out there! Our love to you and ..."
Gupta Nijay Barr’s The Making of Biblical Womanhood—My ..."
"Hi Nijay, listening to Dr. Barr's book on Audible, have it on my Kindle, and ..."
Kerry Larson Luddy Barr’s The Making of Biblical Womanhood—My ..."
"I'm no expert, but. . . It seems to me that "Rachel's weeping" doesn't provide ..."
Randy Thompson Interview with Rebekah Eklund: Beatitudes through ..."
"No F.F. Bruce?!"
Terry Douglas Top NT Scholar Heroes—Insights from #50-2-Follow
Browse Our Archives
get the latest from
Crux Sola: Formed by Scripture to Live like Christ
Sign up for our newsletter
POPULAR AT PATHEOS Evangelical
1