Chesterton did not say it (sorry)… 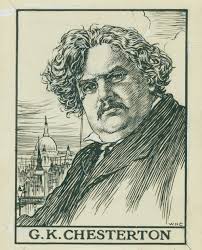 For a talk that I am going to give tomorrow, I was planning on using the famous Chesterton quote: “every man who knocks at the door of a brothel is actually looking for God.” Because I try to be a respectable scholar, I wanted to find the context and source for this quote.

Oh no! Interestingly, everyone and their brother (mostly “Christian living” authors, but also Biblical scholars and theologians as well) attributes this quote to Chesterton, but NO ONE (I scoured Googlebooks) cites a source other than someone else quoting Chesterton without a source!

Then I came across a comment by James K.A. Smith (Desiring the Kingdom) where he says this quote is wrongly attributed to Chesterton.

So, who said it, or wrote it, or first used it?

Well, we don’t know, but the “American Chesterton Society” claims that, again, Chesterton didn’t pen it, and it seems to first appear in the book The World, The Flesh, and Father Smith, by Bruce Marshall (1945), quoted as this: “…the young man who rings the bell at the brothel is unconsciously looking for God.”

So there you have it. Preachers: you will have to fix your notes.

August 4, 2013 Freedom According to Philo
Recent Comments
0 | Leave a Comment
"Great review. I’ve had mine for 6 months or so and absolutely love it. It’s ..."
Jack Lee Remarkable 2 (Paper Tablet) for Academics: ..."
"Has there been any exploration of keeping it alive as an open access journal? My ..."
James F. McGrath Journal for the Study of Paul ..."
"I believe that I have put together the best argument which refutes/defeats the supernatural claims ..."
Gary M Journal for the Study of Paul ..."
"Thanks, Jim. Wow, really honored you read and reviewed it."
Nijay Gupta First Review of TELL HER STORY
Browse Our Archives
Related posts from Crux Sola: Formed by Scripture to Live like Christ