Revelation and the Politics of Apocalyptic Interpretation (Review) 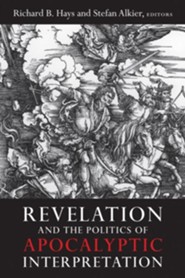 When I went to seminary, one of the most popular courses at that time was exegesis of Revelation, taught by Dr. Sean McDonough (who studied Revelation at St Andrews under Richard Bauckham). When I finished seminary, I was sometimes asked, what is your view on the end times and the millennium debate? My reply: I don’t know, we didn’t talk much about that? You might wonder, how could you study Revelation and not get into the nitty-gritty of the end times? Simple: we were interested in the theology of the text, not irrelevant timeline debates.

In the last few decades, Revelation has come back in vogue for a number of reasons. First, we have taken the time to look at Jewish apocalyptic literature (and there is a good amount of it), and it has helped us gain perspective on what Revelation is and what it isn’t. Secondly, we can understand Revelation, in its context, as a form of resistance literature – a way of expressing a counter-cultural and counter-imperial identity for Christians under threat. The “relevance” of this text has been redefined, and it has to do, not so much with what happens next, but how we respond faithfully to God now in view of how his character shines forth through what he has done (in the cross) and what he plans to do (with new creation).

So, with this context in mind, I was very eager to read the 2012 Baylor University Press volume entitled, Revelation and the Politics of Apocalyptic Interpretation, edited by Stefan Alkier and Richard Hays. The essays of the book come from a “collaborative interdisciplinary conference of leading scholars to deliberate about the interpretation of the book of Revelation,” and particularly related to “intertextual interpretation” (see p. 5). The conference was held at Duke Divinity School in 2010. Here is the TOC

“What Has the Spirit Been Saying? Theological and Hermeneutical Reflections on the Reception/Impact History of the Book of Revelation” (Michael J. Gorman)

“Faithful Witness, Alpha and Omega: The Identity of Jesus in the Apocalypse of John” (Richard B Hays)

“God, Israel, and Ecclesia in the Apocalypse” (Joseph Mangina)

“Revelation and Christian Hope: Political Implications of the Revelation of John” (N.T. Wright)

“Witness or Warrior? How the Book of Revelation Can Help Christians Live Their Political Lives” (Stefan Alkier)

“The Apocalypse in the Framework of the Canon” (Tobias Nicklas)

“Reading What is Written in the Book of Life: Theological Interpretation of the Book of Revelation Today” (Marianne Meye Thompson)

I was especially appreciative of the essays by Gorman, Hays, Mangina, Alkier, and Thompson. While each contributor pitches in on their own subject in relation to Revelation, much unites their perspectives. The common assumptions about Revelation are spelled out in the introduction.

(1) Revelation’s visions are to be read as poetic symbolism rather than literal description or prediction; literalistic interpretation can lead to disastrous misinterpretation.

(2) The book’s symbolism must be understood through understanding its intertextual relation to Israel’s Scriptures.

(3) The book’s message is centered christologically on the symbolic depiction of Jesus as crucified and triumphant Lord.

(4) The book summons its readers to follow the pattern of Jesus through countercultural, suffering witness to the one God, rather than through acts of violence.

(5) In the theological world of the Apocalypse, there can be no separation of the spiritual and political spheres.

(6) The book points to the future hope of God’s triumphant justice and God’s healing of the created world-not its destruction.

If you go into the study of Revelation with these six in place, you will be deeply transformed by this powerful, even volatile book of Scripture!

Here is a choice quote from Hays:

…those who proclaim the message of the Apocalypse to challenge the injustice of the prevailing political powers are ‘confronting a false political order with the foundation of a true one’ [quoting O’Donovan]. Those who ‘follow the Lamb wherever he goes’ (14:4) will find that the Christology of this mysterious visionary Apocalypse leads us ultimately to justice and life. The slaughtered Lamb, the Faithful Witness, is also the One who stands, as Alpha and Omega, at the beginning and end of history. For that reason–and only for that reason–we can join John the Seer in patient endurance while we live, act, and bear witness in light of his apocalyptic vision of the healing of the nations (p. 83).

August 19, 2013
FS for Matera, Unity and Diversity in the Gospels and Paul (Review)
Next Post

August 25, 2013 Do We Need the New Testament, Goldingay Asks (Video Resource)
Recent Comments
0 | Leave a Comment
Browse Our Archives
get the latest from
Crux Sola: Formed by Scripture to Live like Christ
Sign up for our newsletter
POPULAR AT PATHEOS Evangelical
1

Be Careful What You Ask For
Preventing Grace
Related posts from Crux Sola: Formed by Scripture to Live like Christ