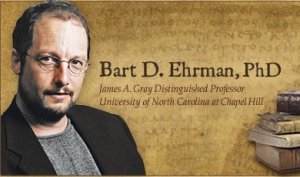 Bart Ehrman, in his How Jesus Became God, spends two chapters on the subject of the resurrection of Jesus because he believes that the early disciples’ belief that Jesus appeared to them was the major impetus for recognizing his divinity (chs. 4-5).

To be quite honest, while I thought his first few chapters were not so bad, I think his argumentation takes several steps backwards in these chapters. I felt that, in these chapters in particular, Ehrman took too many liberties in (1) defining what historians can and cannot do and (2) using guesswork to move his argument forward. We will get to that in a moment.

In about 80 pages, Ehrman says a lot, but I think here are the two key take-away points:

(1) It is historically unlikely, according to Ehrman, that Jesus was taken down from the cross and given a proper burial. Most likely, he was picked apart by birds or fed to wild animals. That is because the cruel Romans who used crucifixion to bring ultimate shame to the accused would hardly have politely agreed to requests to offer this “enemy of the state” a dignified burial.

(2) Ehrman doesn’t believe Jesus bodily rose from the dead. His best guess is that the NT and the phenomenon of early Christianity itself probably attests to the early disciples believing Jesus appeared to them (esp Peter and Paul). This may very well have been hallucinations. While Ehrman sometimes comes across as open to letting readers come to their own conclusions about Jesus’ nature, Ehrman clearly states his “historical” view: “[Jesus] was purely human” (204).

I would like to interact with a series of arguments in regards to these points that Ehrman makes in these chapters.

Jesus Was Not Buried

Part of Ehrman’s argumentation in dismissing the burial traditions of Jesus is rarity – Paul does not mention Joseph of Arimathea, he argues (see pp. 152-153). I cannot see why this is that big of a deal – we cannot equate Paul’s letters (which are pastoral documents, not evangelistic ones) with how he shared the gospel (even 1 Thess 1:9-10 does not say it all). Aside from 1 Tim 6:13, Paul doesn’t talk about Pontius Pilate. He simply did not have a reason to share that kind of information in his letters. Paul doesn’t mention Mary or Joseph or Jesus’ siblings. There are lots of things Paul doesn’t talk about.

Ehrman proposes that Jesus was not buried, but the early Christians fabricated an empty-tomb story so they could have a resurrected Jesus. I don’t agree that this was needed. Couldn’t Jesus have been eaten by wild animals and still God put his body back together? People died in all kinds of ways in the OT and second temple period, but still believed in the (general) resurrection. So, why not have Jesus “raised” after being eaten? I think that it could have worked that way.

Is the Eyewitness Testimony of Women Proof of Empty Tomb Story?

Ehrman comments that Christian apologists often say that the fact that it is women who are the main and first witnesses to the empty tomb are indicators that these stories are not fabricated. But Ehrman rebuts with the idea that men wouldn’t fabricate such stories, but women preachers would. He argues that, since there were many women in early Christianity, they would have a vested interest in making up such stories.

Really? I find it very hard to believe, despite the high numbers of women, that women themselves introduced women as the first and main witnesses of the resurrection. Despite such a thing being good for them (as women), would it help the sharing of the gospel? Also, even if “women storytellers” were responsible for the introduction of the tradition (which I doubt), what would compel the gospel writers to follow this tradition? Would they have felt compelled to do so? What would have made this women-witness tradition “stick”?

Why Did Witnesses of Resurrection Still Doubt?
Ehrman wonders, if Jesus did really rise from the dead, and appear to disciples, why were some eye-witnessing disciples still skeptical? Good question, Erhman, but even the Parable of the Rich Man and Lazarus anticipate this strange phenomenon – some things are just hard to believe. But not just because it was a strange vision, but because Jesus was crucified. No one comes back from crucifixion. Game over. But not this time. They doubted and wondered because “Cursed is anyone who hangs on a tree.” It’s all about context, not appearance form per se.
Historians Cannot Appeal to Resurrection as Theory
Perhaps the biggest argument Ehrman repeats – one I found so strange – is that he says historians as historians cannot turn to “resurrection” to explain the empty tomb because that does not compute according to the code of historical study. Why not? Because a theory can only be put forward that fits within the options most historians consider possible. Ehrman says this over and over and over again. The resurrection cannot be taken seriously as a theory or event because “it requires a set of theological beliefs that are not generally held by all historians doing this kind of investigation” (148).
I find this such an unusual argument! What he is basically saying is this: That Jesus rose from the dead is extremely improbable. OK – All Christians agree with that! It doesn’t happen all the time! But does that make it historically impossible? If history has taught us anything, it is that, while history often repeats itself, there sometimes happens events that are very unlikely. Right?
But here Ehrman seems to follow a set of rules for historians that are dependent on what historians believe theologically. Does that mean if, all of a sudden the best historians in the world converted to Christianity, that we could then say the resurrection was a historical event because it now fits into their theological presuppositions? I guarantee Ehrman would have to say “yes,” though he would think such a mass conversion unlikely (!).
Again, this bewilders me. History-work has never been dependent on mass-consensus on theological presuppositions. It is about evidence. Plain and simple. Different people will interpret ambiguous evidence differently, but it just means that historical work is tricky, not that there is a historians’ theological-presupposition handbook out there. (Bottom line: Ehrman has to define what a historian is in such a way as to make the resurrection impossible as a theory that a ‘historian’ could make appeal to.) This is an extremely modernistic attitude towards historical work and I would dare to say there are quite a few historians (past and present) who define what historians can and cannot do very differently.
Ehrman’s “maybe’s,” and “possibly’s”
If the NT is wrong about the burial, resurrection, and ascension of Jesus, what happened? Repeatedly, Ehrman has to venture his own theories (birds ate Jesus, Peter and Paul had hallucinations, there was no ascension). But throughout these chapters you will read a lot of “maybe’s” and “possibly’s.” He has to guess his way through (because, without the NT, which he mistrusts, he’s left with guesses). But at the end of a string of sequential guesses, all you have is a historical fiction (the Ehrman revisionist story of Christianity) that is one big guess based on things that normally happen (i.e., crucified bodies get eaten, people sometimes have visions). To me, that is not helpful. At best Ehrman should have stopped with: We don’t know what happened at all in the first century regarding Jesus and the origins of Christianity and we will never know. I just cannot see why he would venture so many tenuous guesses based on relative historical scenarios. Either it happened the way the early Christians recount, or it did not. If not, we just don’t know and guesses are not worth proposing because Ehrman tends to transform them into probabilities.
Previous Post

April 29, 2014 Video Resource: NT Wright at Edinburgh, Novenson Responds
Recent Comments
0 | Leave a Comment
"Great review. I’ve had mine for 6 months or so and absolutely love it. It’s ..."
Jack Lee Remarkable 2 (Paper Tablet) for Academics: ..."
"Has there been any exploration of keeping it alive as an open access journal? My ..."
James F. McGrath Journal for the Study of Paul ..."
"I believe that I have put together the best argument which refutes/defeats the supernatural claims ..."
Gary M Journal for the Study of Paul ..."
"Thanks, Jim. Wow, really honored you read and reviewed it."
Nijay Gupta First Review of TELL HER STORY
Browse Our Archives
Related posts from Crux Sola: Formed by Scripture to Live like Christ