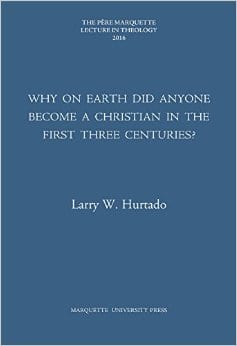 Today I read through Prof. Larry Hurtado’s new little book Why on Earth Did Anyone Become a Christian in the First Three Centuries? (Marquette Univ Press, 2016; based on the 2016 Marquette Lecture in Theology). Here I want simply to commend the book to you, and give some brief notes.

Firstly, Hurtado is less interested in answering the question, and much more concerned with prompting others to take interest in this question. So, he writes, “There must have been features of early Christian faith that made it not only distinguishable but also worth the consequences often involved in taking it up” (131).

He spends quite a bit of time in the book examining the challenges that faced Christians  – both political, but also social. He also takes a look at what sorts of people became Christians, and where. He concludes, “whatever the appeal of Christianity, it was clearly something that succeeded across various ethnic and geographic lines, and its spread did not apparently depend on any one kind of social network” (28).

I was really interested in his discussion of social challenges that affected Christian slaves (see 89-91). What could they do about holiness and purity if forced into sexual activity without consent, for example? Hurtado also has a nice section on “lapsed Christians” (see pp. 94ff.)

Towards the end of the book, Hurtado does at last venture into the possible motivations for conversion. In terms of “benefits” he notes the arguments that scholars have made for the powerful effect of (and attraction to) healings, and also the social bond of the churches. Hurtado notes, though, that there would have been other places people could turn for healing/magic, and also social cohesion – so why Christianity when it was so suspicious and ostracizing? I wish Hurtado had delved into these subjects more.

What about “ideas” from Christianity that were attractive? Hurtado mentions two: “a loving God” (something rather unusual in ancient religion), and “eternal life” (more common, but not the promise of embodied eternal existence).

Personally, I think the healing/miracles aspect is underplayed by Hurtado – I think of the perspective of Simon in Acts, as well as the scholarly movement towards recognizing St. Paul as having a significant healing/miracle-working ministry (see Twelftree’s recent Paul and the Miraculous).

Also, I don’t think Hurtado gave enough attention to the church’s charity work (he does talk a bit about it on 112, but somewhat dismisses this by noting the lack of incentive for wealthy pagans. I would respond by noting how few wealthy elites seem to have converted in the first century).  I think Bruce Longenecker has made a strong case for the rarity and notoriety of Christian charity in the ancient world (see his Remember the Poor, a book Hurtado doesn’t cite as far as I can tell), something that Hurtado does not acknowledge.

Finally, I think we first need to ask -why would pagans be interested in Judaism? That is, we need to work more on the interests of god-fearers. By the account of many (including myself), many pagan converts to Christianity came through the door or porch of the synagogue. Dunn and Fredriksen have done work on this. Acts seems to point in this direction to some degree, but many scholars mistrust Luke’s version of Paul’s ministry (I am not sure where Hurtado stands).

In any case, Hurtado is a top-notch early Christian historian and I am delighted that he published such a rich (brief!) study that can be read in one (or two) sittings. At $14 it is also very affordable!

May 23, 2016 Mike Bird and the Apostles' Creed (Gupta)
Recent Comments
0 | Leave a Comment
"Great review. I’ve had mine for 6 months or so and absolutely love it. It’s ..."
Jack Lee Remarkable 2 (Paper Tablet) for Academics: ..."
"Has there been any exploration of keeping it alive as an open access journal? My ..."
James F. McGrath Journal for the Study of Paul ..."
"I believe that I have put together the best argument which refutes/defeats the supernatural claims ..."
Gary M Journal for the Study of Paul ..."
"Thanks, Jim. Wow, really honored you read and reviewed it."
Nijay Gupta First Review of TELL HER STORY
Browse Our Archives
Related posts from Crux Sola: Formed by Scripture to Live like Christ