Confession: I was one of the few folks that did not read Richard Bauckham’s Jesus and the Eyewitnesses when it first came out in 2006. So I felt compelled to wade through this 600+ page updated edition. Bauckham, as many of you know, is an incisive and interdisciplinary scholar, having made important contributions to the study of Revelation, NT Christology, and women in the Gospels, just for starters.

In Jesus and the Eyewitnesses, Bauckham makes his intentions clear. He argues that

“in the period up to the writing of the Gospels, gospel traditions were connected with named and known eyewitnesses, people who had heard the teaching of Jesus from his lips and committed it to memory, people who had witnessed the events of his ministry, death, and resurrection and themselves had formulated the stories about these events that they told” (93)

Bauckham realizes that he is cutting against the grain of modern scholarship by appealing to these “eyewitnesses.” One of his overarching concerns is to propose “testimony” as a better description of what the Gospels offer, rather than either what we call (pure) “history” or religious legend. Some have scoffed at this idea of testimony, as if it is “faith-based” rather than scientific. Bauckham responds, though, by claiming this: “From a historiographic perspective, radical suspicion of testimony is a kind of epistemological suicide. It is no more practicable in history than it is in ordinary life” (506). Here is a longer statement on the subject:

“To insist, with some Gospel critics, that the historicity of each and every Gospel pericope must be established, one by one, with arguments for each, is not to recognize testimony for what it necessarily is. It is to suppose that we can extract individual facts from testimony and build our own reconstruction of events that is no longer dependent on the witness. It is to refuse the privileged access to truth that precisely participant testimony can give us. Ancient historiography rightly valued such testimony as essential to good history, and the Holocaust shows us how indispensable it can be when the events we confront are ‘at the limits'” (502) 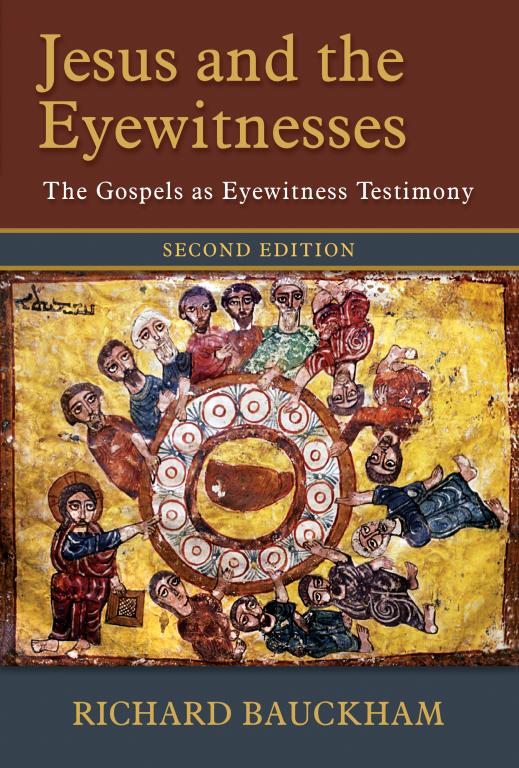 How does Bauckham go about proving that the Gospels are supported by eyewitness testimony? His approach is necessarily multiform, focusing, for example, on the use of names in the Gospels and what the appearance of so many named characters tells us; “these people joined the early Christian movement and were well known at least in the circles in which these traditions were first transmitted” (45). Bauckham reasons that there would have been no reason to name such figures except for this identification as real participants in the story and probably known eyewitnesses (47). But could it be that the Evangelists made these names up for narrative purposes? Bauckham argues that from what we know of the popularity and use of Jewish names in the ancient world at large, the Gospels reflect the same (see 84). And what about those unnamed characters? Bauckham proposes that some of these may have been eyewitnesses who were not named due to “protective anonymity” (2000).

I have offered just a taste here of what is in Jesus and the Eyewitnesses. Bauckham is interested not only in names, but also the earliest reception of the Gospels, recent scholarship on individual and communal memory, problems with form criticism, and ways that the Gospels identify eyewitnesses. In this second edition, Bauckham has added three new chapters that appear at the end of the book. The first extra chapter deals with Mark, specifically offering more detail regarding Bauckham’s argument that Mark presents Peter as a key eyewitness source for his Gospel. A second extra chapter digs deeper into the identity of the Beloved Disciple – Bauckham defends his conclusion that this was not John the son of Zebedee. Finally, Bauckham further discusses his rejection of form criticism. I love this line: “I discovered the death of form criticism and reported it. I did not attempt to kill it” (590).

So, what is my take on Jesus and the Eyewitnesses (2nd ed)? Again, I am deeply impressed by Bauckham’s ability to tackle his argument from various angles which requires facility in several disciplines. I believe he is at his best when he demonstrates how eyewitnesses are emphasized and identified in (non-biblical) ancient texts, such as in Lucian, Porphyry – and in the new chapters he adds Polybius, Plutarch, and Josephus. This is exactly the kind of spade-work that will lead to a paradigm shift, if Bauckham’s findings hold up to further scrutiny.

But, I hasten to point out that in many ways Bauckham is pioneering new territory, and this makes it very difficult to prove how the Evangelists were divulging the eyewitnesses. Note for example how he admits: “I know of no comprehensive study of the ways in which ancient historians indicated their eyewitness sources” (514).

Despite the length of the book, I felt that Bauckham should have given more attention the the matter of genre and the Gospels. If he is going to focus on how texts mark eyewitnesses, I believe this merited a chapter on gospels as biographies. This is somewhat implicit in his work, but it deserves space, because then one is able to determine more clearly the best comparative texts.

In the end, what Bauckham offers is plausibility. He shows how it is plausible that the Gospels should be taken as historical works that come from eyewitness testimony, similar to the way other ancient historical works relied on eyewitnesses. Obviously, Jesus and the Eyewitnesses will remain an important voice in the wider discussion of the origins, development, and nature of the Gospels and what they tell us about Jesus and the early Christians.

June 8, 2017
Barth and Ephesians - Book of the Year Contender (Gupta)
Next Post