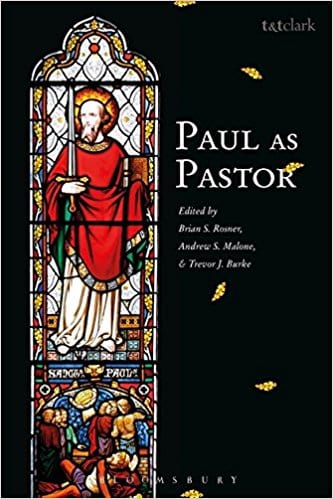 For many years I have been interested in the subject of Paul as model of “pastor.” On this topic, I have appreciated James W. Thompson’s Pastoral Ministry according to Paul: A Biblical Vision (Baker, 2006) and Derek Tidball’s Ministry by the Book (IVP, 2008). Recently, editors Brian Rosner, Andrew Malone and Trevor Burke put together an essay collection on Paul as Pastor (T&T Clark, 2018). The contributors are mostly (though not exclusively) located in Australia and cover the range of Paul’s letters as well as some reception of Paul (Augustine and Whitefield). Overall, this book supports and cultivates further thought on Paul, not only as “theologian,” but as change agent amongst the communities under his apostleship. In this regard, the book re-frames Paul not only in view of what he wrote and thought, but also in view of what he felt called to do with these believers.

One important question that I did not think was adequately addressed is: what is a pastor? What exactly does it mean for someone to be “pastoral”? For some contributors, the focus was on the “teaching” work of the pastor (e.g., Peter Orr’s essay on Ephesians). For others, the focus is on pastor as “priest” who leads believers towards holiness in life (e.g., Colin Kruse on Romans). Rosner and Burke, in their respective essays, concentrated on the nurturing and caring aspects of pastoral ministry with interest in Paul’s extensive familial and kinship metaphors (e.g., Paul as father, mother, and brother). I did appreciate all these nuances (which are present and emphatic in different ways in different Pauline epistles), but it would have been helpful to have a discussion at the outset of the term “pastor.” I like to point out that this word is really not found in the NT apart from the bare mention in Ephesians 4:11. That makes it necessary to be clear about what it means to study the concept of pastor from the Bible. Some contributors tipped their hat to the notion of “shepherding,” but even still this concept can go in many directions (from teaching, to executive leadership, to “care for souls”, etc.).

This book adds helpful, diverse perspectives on the topic of Paul and pastoral ministry. I hope this promotes further dialogue and investigation.

February 1, 2018
How Do You Write So Much? Tips for Aspiring Writers (Gupta)
Next Post

February 7, 2018 What Did Jesus Look Like? (Gupta)
Recent Comments
0 | Leave a Comment
Browse Our Archives
Related posts from Crux Sola: Formed by Scripture to Live like Christ